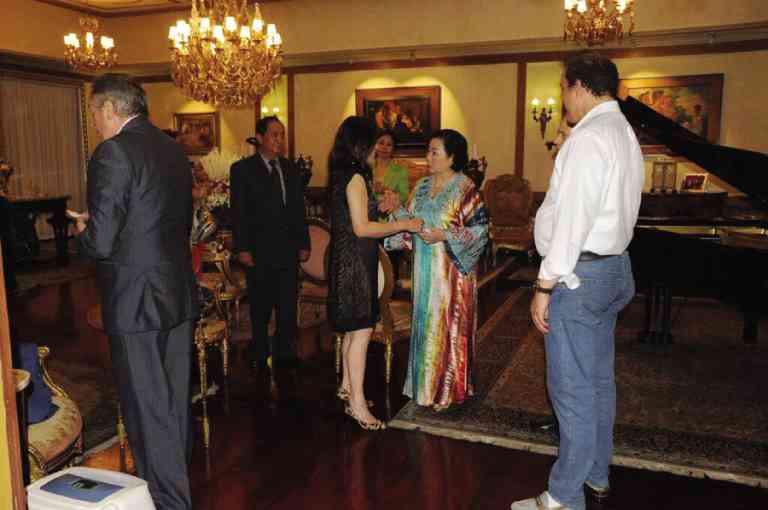 I first met Cecile Licad at the Cagsawa Church Ruins in Daraga, Albay, one day in August of 1975, when she was only 14. That was the year she performed at St. Agnes Academy in Legazpi City.

I got married in the same Albay tourist attraction eight months earlier, at age 26.

But on the night I first heard Cecile play, with a PNR train hooting in the middle of Ravel’s “Sonatine,” I also got married to her music.

It’s been 40 years, and here I am, a 67-year-old music fan, suddenly reflecting on our first meeting. I recall that I got so carried away by her performance that I made a radio program out of its live recorded version. The cassette was played in a local radio station.

My first interview story on Cecile ran on the front page of the Bicol Chronicle, and her recorded performance would always begin and end my day in Albay. (Now I am in frantic search of that “Jurassic” cassette tape, which probably perished with my first cell phone the size of a short bond paper.)

In the late ’70s, when I was still based in Albay, I got to see concerts at the Cultural Center of the Philippines (CCP), thanks to complimentary train rides courtesy of then PNR head Nicanor Jimenez, father of Inquirer editor in chief Letty J. Magsanoc (LJM).

So I was able to observe not just Cecile’s music, but her personal life as well, when we became friends and I began producing her shows.

I got to meet her husband, Brazilian cellist Antonio Meneses (gold medalist in the Tchaikovsky Competition).

I had a ringside view of her juggling two roles—as a concert pianist and a mother. She went to a CCP rehearsal of a Tchaikovsky concerto carrying a stroller and feeding bottles for her young Otavio.

I stood helpless in her hotel room, as she asked me how to cure her son’s asthma while she prepared for a Brahms concerto. I told her to take him on a long walk on the beach, and soon it was gone.

When Otavio was 10, he was our pre- and post-concert entertainer. After his mom’s engagement, as Cecile and I relaxed with beer, he would regale us with his one-man shows. He could mimic another pianist playing the “Variations on a Theme by Paganini,” or a rich music patron, delicate walk and all. And, yes, even his own mom, and former first lady Imelda Marcos.

Next day in Dumaguete, another drama unfolded on the day of the concert, on the level of “Black Swan” and “Turning Point.” Cecile didn’t like the huge Steinway grand she had to use at the concert; it sounded like a harpsichord.

I went out looking for a substitute piano in the houses of well-off music lovers. Two were available, but none of my entreaties could make the owners allow their piano to leave their beautiful abodes.

When I returned to the theater, Cecile was tinkering with the inner part of the piano. “Pablo,” she said, “this piano just won’t work. My fingers are close to bleeding but no sound would come out. I guess you just have to cancel the concert.”

This led to a near-bloody exchange between the music department head and the pianist, with Cecile at one point exploding: “Pablo, sino ba ’yang p*ing yan?”

Confused, Otavio approached me and asked, “Pablo, what does p*ing mean?”

I wanted to laugh at that most innocent question.

Otavio’s grandma turned to Cecile and implored her, “Cecile, maawa ka naman kay Pablo. Think of the tickets he will reimburse. The concert is almost sold out.”

Cecile gave me another look; I must have looked like it was my last day on earth.

“Okay, Pablo,” she said. “So there is nothing we can do. I will agree to perform only if you do this: make a polite speech before the concert asking the school to buy a good piano after this concert. I don’t know how you will put this, but tell them I am performing on a bad piano.”

I composed a speech a few hours before the concert. Thanks to Divine Providence, the concert went well, bad piano and all. It turned out the piano had been kept in a bodega with a leaking roof for many months.

Cecile loved going to the provinces after she was done with her Manila concerts, her commitment to excellence and dedication to her craft unwavering, whatever the place.

I was witness to countless standing ovations of her shows in Cebu, Bacolod, Legazpi City, Davao City (courtesy of impresario Margie Moran Floirendo), Nueva Ecija, Zambales, Tagaytay and Tuguegarao City, among others.

One of my last outreach concerts with her was probably the most dramatic.

Held in a resort near the birthplace of Emilio Aguinaldo, the concert preparations went well, with Cecile telling me, “Pablo, how did you find this excellent venue?”

She rehearsed while I rearranged the seats for patrons and regular ticket buyers. With a good venue and a good piano courtesy of Ray Sison’s ROS Music Center, Cecile said she would take a good rest and then asked me to knock on her door two hours before the performance.

But as the pianist was resting, I heard the sound of fire trucks.

Word came soon enough: The venue I had prepared earlier was on fire.

Truthfully, my panic was not so much about the venue, but about the thought of a grand piano costing millions being gutted in that fire.

The fire was temporarily contained, but we could no longer use the venue. With a concert happening in two hours, I inspected an alternative place, found it good enough and we started rearranging chairs.

Music lover Irene M. Araneta wondered how the concert could happen with fire trucks all over the place. I breathed deeply and told myself: I can’t panic. Do what you can manage.

When I went to Cecile’s room, she immediately knew something was wrong just seeing my countenance. I told her she now had to perform in another venue.

“What?” she exclaimed. “What happened to the venue you prepared?”

“It was partially damaged by fire.”

“But I cannot just perform anywhere. Can I be heard in that new venue?”

“I tested the acoustics,” I replied. “It’s not bad. Ray (Sison) said it was better than the damaged venue.”

Cecile let out a deep breath and said, “Okay, let’s go and let’s check the theater.”

Probably to soothe a tense and nervous concert organizer and an equally nervous audience, Cecile gave the concert everything she had. After she had played Chopin’s “Polonaise Fantasie in A Flat” and “Grand Polonaise Brilliante,” the audience was beside itself with excitement.

The new venue allowed them to be just a few feet away from the piano.

What we didn’t realize (again) was that something would happen in the middle of the fiery “Dante” sonata by Liszt.

It was a piece that, in some sections, conjured images of inferno. Indeed, the D minor part depicted the wailing souls of Hell. The last part (a beatific chorale in F-Sharp Major) was pure apocalypse, as she intoned the sounds of joy of souls heaven-bound.

It was a hair-raising performance that drew several standing ovations and endless encore pieces.

But while the piece was being played, the original venue had apparently caught fire again and the place we were at was in dangerously close proximity to it!

This was no way to end a standing ovation. But after the hurried autograph-signing, the audience fled to safety.

Rustan’s Nedy Tantoco, meanwhile, led Cecile to her car while I worried about paid tickets for the ticket buyers who didn’t show up perhaps because they thought the event had been canceled because of the fire.

“That must be your most dramatic outreach concert,” Cecile told me as we flew to another outreach gig in Cebu.

Grateful that we emerged unscathed, I asked her to sign a picture of her and my granddaughter, who had witnessed her first fiery concert, literally speaking.

Cecile was the last classical musician that Inquirer’s LJM heard before she went to The Great Beyond. This was at the Apec event last November. When I saw her on TV with US President Obama after the performance, I texted columnist Mandy Navasero to ask LJM what she thought of Cecile’s performance.

Mandy replied: “Pablo, Letty has only one word for it: mesmerizing.”

Pianist Cecile Licad is soloist of the Philippine Philharmonic Orchestra under Olivier Ochanine on Jan. 28, 8 p.m. at CCP Main Theater. The concert is presented by Rustan Group of Companies and Philippine Italian Association in cooperation with CCP. Her program includes Tchaikovsky No. 1 in B Flat Minor and Rachmaninoff Piano Concerto No. 2 in C Minor. Call CCP Box Office at 8321125 or TicketWorld at 8919999.