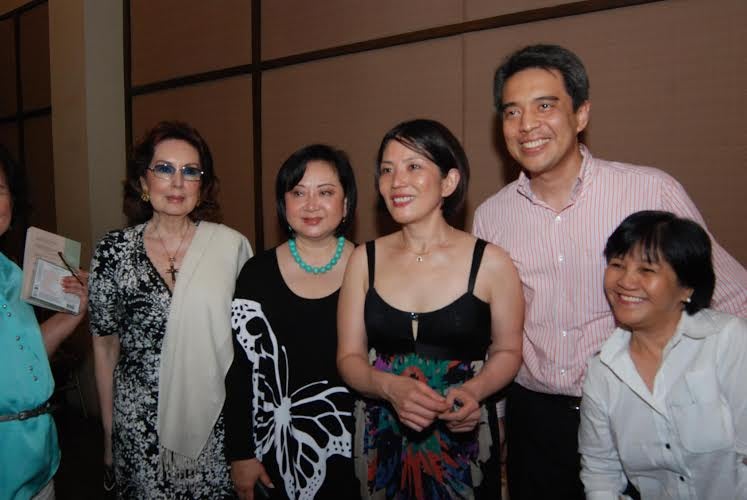 CECILE Licad with Rustan’s Nedy Tantoco (second from left) and other fans in an outreach concert in Cavite. This was Licad’s most dramatic concert as the original site caught fire, prompting a sudden change of venue.

PIANIST Cecile Licad comes home for a special fund-raising concert on Jan. 28, 8 p.m., at the Cultural Center of the Philippines (CCP), as soloist of the Philippine Philharmonic Orchestra (PPO) under the baton of Olivier Ochanine.

Proceeds of the concert will go to the Philippine-Italian Association Endowment Fund and to the first PPO USA Tour set this June.

While her sense of poetry and lyricism was already evident during her early years as a child prodigy in Chopin No. 2, it was in Rachmaninoff No. 2 that she jolted Manila critics and went on to impress her first audiences in Philadelphia.

One of her first recordings is Rach 2 with the Chicago Symphony Orchestra under the baton of the eminent Claudio Abbado, who passed away last year.

Licad first played Rach 2 with the PPO (then called CCP Philharmonic) under the baton of Luis Valencia at age 12 and was declared a music phenomenon.

Music critic and jazz exponent Lito Molina wrote: “Cecile Licad projected a tone, phrasing and feeling that one who was twice or thrice her age may find rather difficult to approximate.”

Rosalinda Orosa agreed, saying Licad could weave circles around most of her adult confreres in this country.

Rach 2 was the piece that won for Licad the Philadelphia Orchestra annual auditions. Her orchestra debut ended to a standing ovation.

It was also in the same concerto she debuted with the Boston Symphony under the baton of Seiji Ozawa. The setting was the Tanglewood Festival in Lennox, Massachusetts, where some 8,000 people cheered her.

The next day, her picture landed in the New York Times with the venerable critic Harold Schonberg writing that there was plenty to admire: a big accurate technique, precise articulations, power, temperament, and the courage to try to make the popular concerto into something more than a virtuoso piece.

When her first Rach 2 was heard in Chicago, critic Robert Marsh reported: “Cecile Licad is one of the great flaming talents that come along one or two times in every generation, and she can produce a great soaring tone from the piano in a class of Rachmaninoff himself.”

When she returns to Manila to play the same war horse, audiences will surely see the complete artistic metamorphosis of Licad, who has evolved as wife, mother and performing artist.

The PPO USA Tour is spearheaded by Ochanine with the support of businesspersons Manny V. Pangilinan and Nedy Tantoco, Philippine Airlines and Federal Land.

Part of the tour is a concert at Carnegie Hall on June 18.