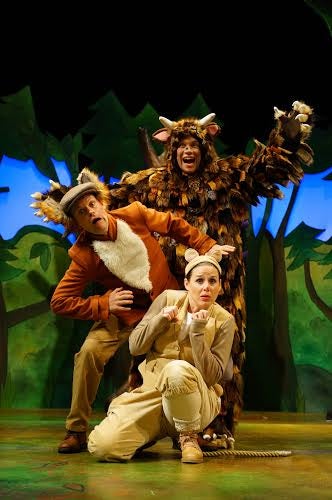 THE GRUFFALO, the mouse and the fox in “The Gruffalo—Live,” showing Jan. 27-31

AN INTERNATIONAL brand, a story-time staple and a well-loved monster —these are just some of the things “The Gruffalo” has come to be since the award-winning children’s story was published in 1999.

“In its four years, KidsFest has grown into a major family-entertainment event in both Hong Kong and Singapore,” said Matthew Gregory, executive producer of ABA Productions, the events outfit behind KidsFest. “This year, we’re proud to bring three world-class live performances to Manila. These shows will provide a fun and educational experience that the whole family can enjoy.”

Julia Donaldson, author of “The Gruffalo,” said the book’s musical adaptation was definitely a different experience—and one that children all over shouldn’t miss.

“It’s exciting and interactive. The actors create a great atmosphere with their backing vocals and narrative passages. Expect catchy songs and lots of laughs,” Donaldson said.

While “The Gruffalo” translates well onstage and is becoming a favorite in children’s theater, a tidbit less known about the celebrated children’s story is that it actually sprung from writer’s block; Donaldson was, at that time, dealing with the lack of a word that would rhyme with her animal of choice.

“And somehow the word ‘Gruffalo’ came to mind to fill the gap,” she said.

In the story by Donaldson, the protagonist—a tiny mouse—journeys through the “deep, dark woods,” where most animals would have seen it as a tasty morsel. But the mouse, being sharp, would fool the woodland creatures into thinking it was friends with a horrible monster called the Gruffalo.

“There’s no such thing as a Gruffalo,” the mouse would say to itself.

Just when the mouse is able to convince all the other creatures in the forest that it was, indeed, acquainted with the dreaded Gruffalo, the tiny rodent gets the shock of its life when it realizes the make-believe monster actually exists.

“The story has a good plot and language. Every page or line has to be a mini cliffhanger to keep the audience engaged and wanting more,” Donaldson said.

But, of course, “The Gruffalo” wouldn’t be what it is now without the creative work illustrator Axel Scheffler put into the project. It is through Scheffler’s able hands that the Gruffalo, the mouse and the rest of the inhabitants of the deep, dark woods were brought to life.

The partnership of Scheffler and Donaldson proved to be quite the success as “The Gruffalo” has been translated to over 50 languages and has garnered several awards. The picture book was even voted the United Kingdom’s favorite bedtime story in 2009.

From page to stage, it has always turned out to be a hit.

Audiences may watch “Aliens Love Underpants” Jan. 28-31. “Erth’s Dinosaur Zoo” will run Feb. 3-7. All shows in Manila will be executed by professional theater companies from the United Kingdom and will be held at the RCBC Plaza’s Carlos P. Romulo Auditorium.

For tickets and inquiries, call 8919999 or visit www.ticketworld.com.ph. For more details on KidsFest 2016 in Manila, check out www.KidsFest.com.ph.