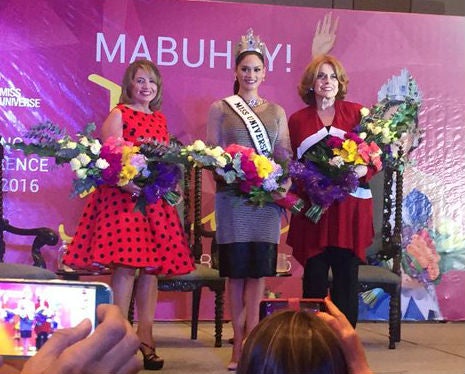 PIA Wurtzbach on Sunday revealed her two fondest memories in her journey that earned her the Miss Universe 2015 title.

During her grand press conference at Novotel Manila on Sunday, Wurtzbach said she remembered first trying out the “Miss Philippines” sash when she first registered for the pageant that would change her life forever.

“The most memorable part of the pageant was the first time they pinned the sash on me. I remember I was the first to register that day. The call time was 10 a.m. but I was there around 9:45 a.m. So it’s not true there’s Filipino time,” Wurtzbach said, drawing laughter from the audience.

She said she stepped in front of a mirror to see for herself how she would look as Miss Philippines, adding that she kept all her sashes she used in competitions.

For her second fond memory, Wurtzbach said she remembered walking on the stage for the evening gown competition wearing the blue gown designed by Albert Andrada.

“During the pageant, when I was walking during the evening gown competition, I was wearing the beautiful blue Albert Andrada gown,” Wurtzbach said.

“I was so happy we’re able to wear the Filipino designer for Miss Universe. I’m happy it happened,” Wurtzbach said.

During the competition, Wurtzbach also said her memorable moment was seeing Philippine flags being waved by her supporters who came to watch her win the crown.

“There was a Filipino flag in every corner. I remember walking on stage and I’ve never been more proud to be a Filipina at that moment,” Wurtzbach said.

Wurtzbach said her most important lesson when she won the crown was to always be herself.

Wurtzbach said she hoped people would learn from her story how to strive for their dreams.

“You have to trust that this is what you really want. And it’s going to take a while but you just have to keep working hard,” Wurtzbach said.

“In this life, there’s no time to just sit and wait for your dreams to come true. It doesn’t happen like that. That’s the kind of mentality na I want na mawala. Nothing is given to you for free,” she added.

Wurtzbach said she hoped the people who watched the MIss Universe would learn to never give up their dreams.

“It was a long journey. And I hope my story can become the inspiration for determination, discipline, faith and hardwork. I hope people learn this: Never to give up in their dreams, because you never know, it could happen to you,” Wurtzbach said.

“Don’t ever lose faith, because [faith] will keep everything intact,” she said.