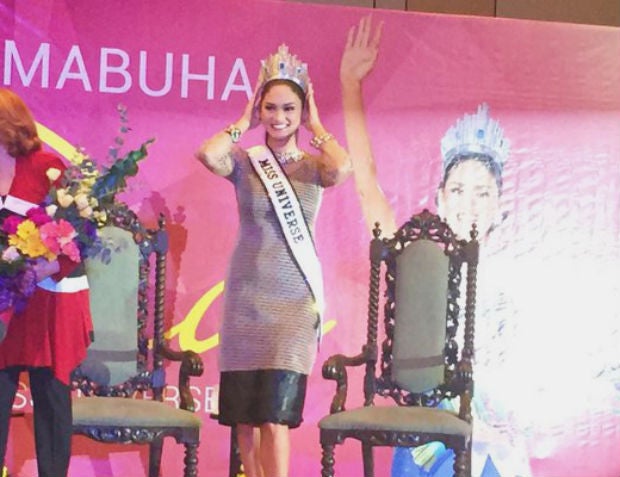 MISS Universe 2015 Pia Wurtzbach wants the next edition of Miss Universe pageant to be hosted in the Philippines so that the world would witness that Filipinos take beauty pageants seriously.

“Definitely I would like to pass my crown here. We’re talking about it already? I only had it for a month,” Wurtzbach jokingly told INQUIRER.net on Sunday.

“I want to pass my crown here in my home. That would be nice right? Para maramdaman talaga ng mga tao kung gaano ka-big deal sa atin yung Miss Universe. (So that people would understand why Miss Universe is a big deal for us.) That would be great,” she said.

The 26-year-old beauty queen said that holding the Miss Universe in the country would also be beneficial for the tourism sector.

She said that while she’s here, she is hoping that the Miss Universe Organization would engage in talks to concerned parties to make the possibility of the country’s hosting of the prestigious beauty pageant into a reality.

“I hope that while were here, we will make the most out of our visit now. I trust that the (Miss Universe) Organization is in talks right now with the possibility of doing that. Sana matuloy,” the beauty queen said.

Wurtzbach’s wish is not impossible to grant as the Miss Universe Organization has done it before.

In 1973, Margarita Moran won the country’s second Miss Universe crown then during the succeeding year, the Miss Universe pageant was held at the then newly-opened Cultural Center of the Philippines (CCP).

Wurtzbach ended the country’s 42-year drought for the title.