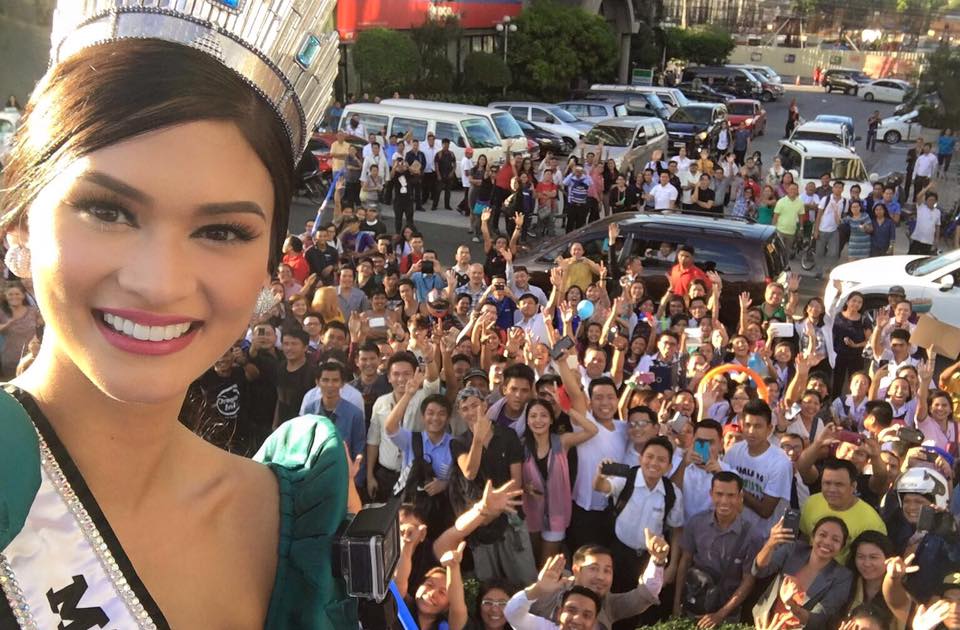 Miss Universe Pia Alonzo Wurtbach poses for a selfie with her fans and supporters during her grand homecoming parade in Manila. Photo courtesy of Miss Universe.

Despite rain-marred parade, Pia takes greatest selfie of all time with fans

AS HER float came to a stop before rolling into Ayala Center in Makati, reigning Miss Universe Pia Alonzo Wurtzbach was greeted with a din of loud cheers, her face glowing with nearly unbroken camera flashes.

But the crowd thundered more when Wurtzbach reached for her assistant to get something that made her kababayans jumped with joy.

“Selfie! Selfie! Smile,” the crowd, most of whom were students and workers in this city’s Central Business District (CBD), chanted.

Wurtzbach whipped out her phone and started taking selfies with the crowd on both sides of Gil Puyat Avenue in Makati City.

Fans waved their hands as the Filipina queen snapped her camera phone.

Wurtzbach posted the photo on the official Facebook page of Miss Universe three hours after the parade and it has garnered at least 312,000 likes and 2,266 shares.

More than a month after her controversial win, the country’s third Miss Universe title-holder on Monday was honored with a parade fit for a queen.

On board her silver and signature blue float, she started parading at 2:30 p.m. from Sofitel Hotel and Plaza in Manila.

‘Confidently beautiful’ in the rain

Rain on her parade? Pia Wurtzbach was confidently beautiful as her charm brightened up her fans amid the gray-tinted sky over the metropolis.

She did not need an umbrella and continued flashing her refreshing smile and waving to her fans who patiently waited for her in the busy roads of Makati.

Pia also had to duck sometimes during four-hour parade to prevent her $ 300,000 crown from tangling with to electric wires or low footbridges.

Throughout her trip, the songs “God Gave Me You,” “Walking on Sunshine and “Beautiful Girl” were played by her parade band in loop.

Confetti, shredded papers spewing from Makati CBD buildings and a rainbow added color to the victory parade that the country last saw 42 years ago. AC