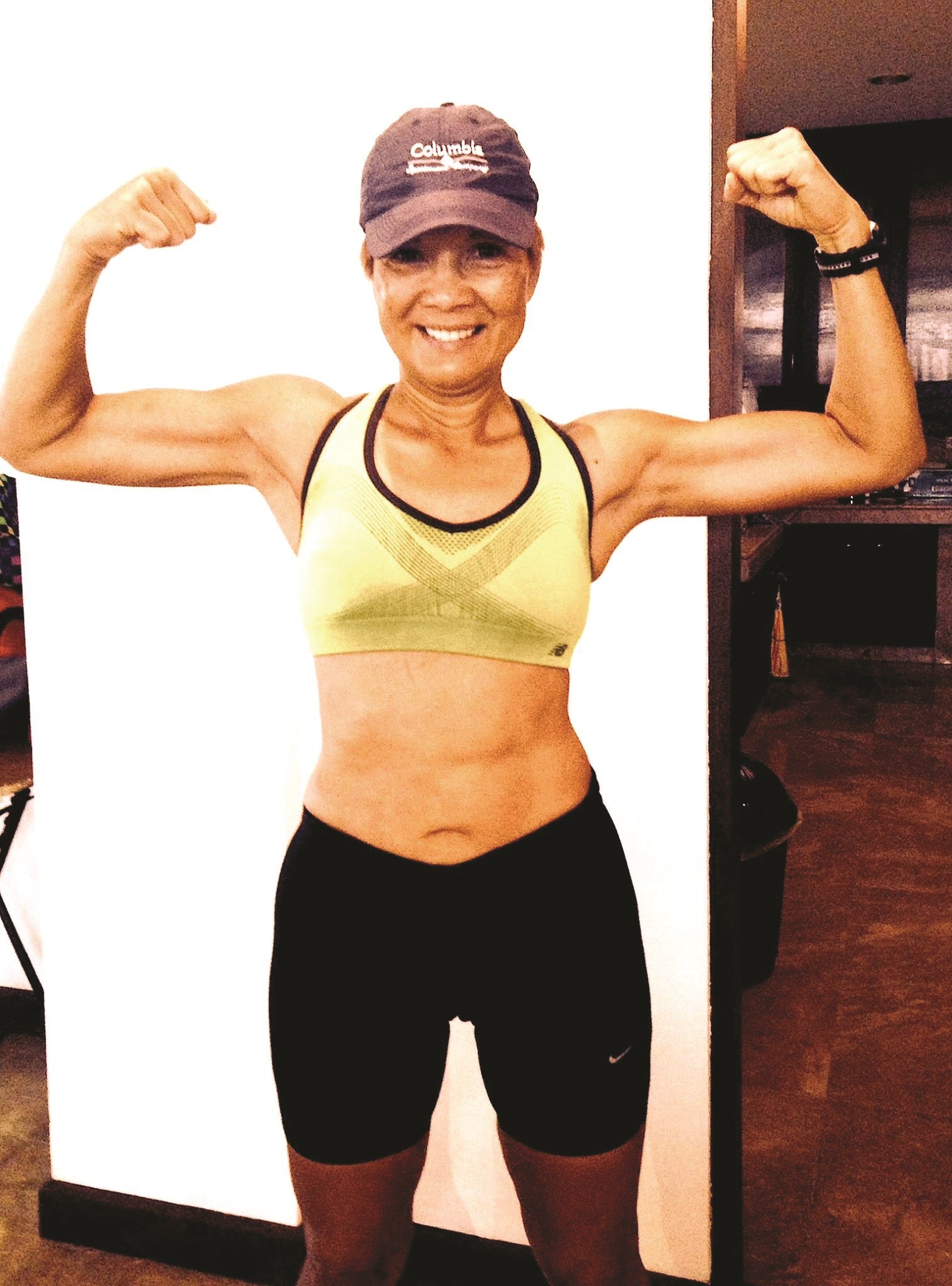 Women in the best shape of their lives–after 50

Baby boomers are redefining youth. Up until a few years ago, women looked great at 40, but lost muscle mass in their golden years.

Inquirer Lifestyle talked to some accomplished women who got into the best shape of their lives after 50. For one thing, they are very driven in their careers. They show no signs of slowing down. Their work discipline is also equally reflected in their diet and exercise regimen.

The former narcotics agent was front-page news when she blew the whistle on Sen. Panfilo Lacson on alleged illegal activities.  But to close friends, Ong is a proponent of the Argentine tango and a woman with a rock-hard body.

During her halcyon days with the Philippine National Police, she would hit the gym and play badminton twice a day, and do tae bo, boxing and Pilates at Camp Aguinaldo. “There was nothing else I could do,” she says on her daily five- to six-hour fitness regimen. Her toned body is a result of a 15-year discipline.

Pushing 60, she has rock-hard abs and trim arms. For 26 years, Ong has been dancing the Argentine tango. Today she has reinvented herself by  organizing milongas or tango parties at Dancing Queen, Savannah Moon, Marriott Hotel, Resorts World and Genting Club Arriba.

Despite her age, her metabolism is fast and her waistline a trim 25 inches. She can enjoy buffets without guilt and eat a huge plate of pancit or burgers and fries without gaining weight. “It’s God’s gift,” says Ong.

When Menchu Lauchengco-Yulo appeared in a bare midriff costume in “Kung Paano Ako Naging Leading Lady,” she received more notices for the cuts in her abdomen than her performance. “I was upstaged by the abs. I don’t even have to sing and act. At 52, I can come in and exit,” says Yulo.

The actress-director was born as a mesomorph, a body type characterized by well-defined musculature. “When I was in high school, I would hide my arms because I found them too muscular—until Madonna popularized them,” she recalls.

While most women have to sweat it out to be keep fat at bay, Yulo doesn’t need to exercise. “I tend to bulk up when I exercise. Once I stop, I get smaller.” Regular walking helps to maintain her size 2 frame.

Aside from her genes, her secret is diet. Yulo eats two meals a day—a brunch of fruit, oatmeal or whole grain toast, and an occasional treat of eggs. She skips breakfast to eat at lunch dates which consist of picking on the bread basket, soup and  a big salad.

Dinner is early—before 6 p.m., a habit acquired from theater work: “I don’t want to eat too close to an 8 p.m. performance.”

The evening meal consists of fish, vegetables such as salads, okra, bitter gourd or pinakbet and no rice. After a late performance, she will snack on yogurt or fruit.

Another advantage is that she doesn’t like fancy desserts, ice cream and chocolates, but she’ll cave in to kakanin such as bibingka, puto and sapin-sapin.

She cites a blood test that drove her to eat healthy. “My cholesterol level was borderline. The doctor asked me what I ate. It’s not in my body to metabolize cholesterol. That stuck in my head.”

Five years into Latin dancing, Joy Chua-Cancio has already been getting into the top 6 in Latin dance sport competitions. Although she competes on a teacher-student level (her partner/teacher is under 35 years old), she also joins competitions with younger participants and gets high scores. “Young people are faster, but older dancers are better in emoting,” says the executive who is adept in rumba, cha-cha, jive and samba.

But Cancio never reveals her age. She urges her teacher/partner to challenge her. “Look at me, I’m capable. Push me,” she says. “If you reveal your age, people might think you can’t hack it because you’re old. I’ve seen women compete after 60 years old and they’re still very strong. It’s a good age.”

Between her schedules in the family business and as a director of the Chamber of Furniture Industries of the Philippines, Cancio manages to train thrice a week: “During those two-hour sessions, all the muscles are activated and the core provides the balance and stability. The control comes from the core.”

Cancio does Pilates to strengthen the stomach, back and derriere muscles, yoga for flexibility and alignment and plyometrics for strong legs and arms and speed. “I never planned to lose weight. My muscles become stronger, particularly the hamstrings and and the back,” she says.

With her taut body, Cancio can wear revealing clothes in the Latin numbers. But out of respect for her children, she has to get their approval for her apparel: “The costumes are fitting enough to reveal the body line, and short enough to show the leg work. The judges need to see how well I move.”

She derives pleasure from the constant improvement of technique, and the happiness resulting from the endorphins kicking in. “The music drives you to move. I’m happy that I forget that I’m tired.”

Her day begins at 4 a.m, then she leaves her Quezon City residence at 5 a.m. and hits the fitness center at Ascott in Makati by 6 a.m. She pumps iron three times a week and swims on alternate days.

By 8 a.m. she’s in her office as one of the advertising industry’s most influential women.

Her secret to staying fit is a diet under Oxford-trained nutritionist Harvie de Baron. “I used to think that exercise was enough. I realized that 70 percent of your body makeup is made in the kitchen,” says Villanueva.

“I started working with Harvie when I was  55. At that age, women are susceptible to osteoporosis, brittle bones due to weakening of the muscles. My fitness goal is not about being slim but getting stronger,” she says.

For muscular definition, Villanueva limits her carbohydrate intake. A cup of rice is allowed on Mondays and Fridays. On Tuesdays, Wednesdays and Thursdays, rice is prohibited.

To define her abs, she avoids unhealthy fats. Cooking is done on an air fryer, using a coconut-based oil. She steers away from gluten products such as breads to avoid its inflammatory effects. Cassava flour is substituted for wheat.

For the past four years, Villanueva has been getting a clean bill of health. “The blood chemistry, glucose and cholesterol levels are normal. There is no predisposition to diabetes.”

De Baron also designed a fitness program to make her look shapelier. “To create an illusion of a small waist, I had to build my shoulders,” says Villanueva. Her weight resistance program developed her back muscles and firmed up her chest.

At an office party costume contest, Villanueva became a finalist in her Darna outfit.

During weekends, she unwinds at the golf course. “I like the idea of being in a big garden. If you don’t use the cart, it’s fun to walk and play 18 holes in a setting of manicured lawns, chirping birds and clean air.”

She doesn’t mind if her handicap is 24. “I don’t get mad if I played a bad game. I enjoy the company.”