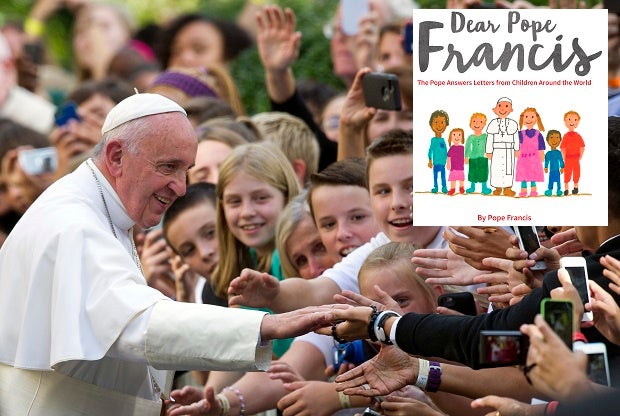 In this Sept., 24, 2015 file photo, Pope Francis shakes hands with school children as he departs the Apostolic Nunciature, the Vatican's diplomatic mission in the heart of Washington, en route Andrews Air Force Base. The book, "Dear Pope Francis," with questions posed for the pope from 30 children from around the globe is out March 1, 2016, from Loyola Press in Chicago. AP File Photo

NEW YORK, United States—”Dear Pope Francis,” 10-year-old Mohammed begins, “Will the world be again as it was in the past?”

Signed “Respectfully yours,” the boy wrote from a Jesuit-run school for refugee children in Syria and was treated to a long and personal answer from the pope himself. So were 29 other children who posed questions to Francis in letters from around the globe for a new book poignantly illustrated with their own artwork.

The book, “Dear Pope Francis,” is out March 1 from Loyola Press in Chicago. It’s a project that likely wouldn’t have materialized without the help of Father Antonio Spadaro, a Jesuit like the pope and the director of La Civilta Cattolica, a Roman Catholic journal published in Rome.

Tom McGrath of the Jesuit-founded publishing house co-edited the book with Spadaro after reaching out to the priest for help. Spadaro brought about 50 letters with questions to the pope so he could select 30. Spadaro sat with the pope as he responded to each. Francis often complimented the artwork of the children.

“He knows Pope Francis very well,” McGrath said of Spadaro. “We tried to make it as easy for the pope as possible.”

The pope’s response to Mohammed spoke in part of suffering and the people who inflict it.

More to Mohammed’s point, Francis answered: “No, when the time comes, the world will not be as it was. It will be far better than it was in the past.”

Once the pope agreed to participate in the project, Loyola reached out to priests and lay people around the world to connect the publisher with children to write the letters.

The 30 kids in the book range in age from 6 to 13. In all, about 250 letters were received in 14 languages from 26 countries around the globe. The pope wound up with about 50 letters from which to choose.

There was no condensing or editing of the pope’s responses. In a 90-minute session with Spadaro last August in Rome, Francis responded verbally in a mixture of Italian and Spanish. Spadaro served as transcriber in addition to connecting Loyola Press with the Vatican.

“These are the pope’s exact words,” McGrath said. “At one point he mentioned, ‘These are tough.’ He realized that he owed the kids a deeper answer than right off the top of his head.”

Spadaro said via email that the pope truly pondered when answering the children.

“Often he looked off into space and tried to imagine the child in front of him,” he said. “And in his gaze I saw care, love.”

Loyola will publish the book in English and Spanish. As an international Jesuit project, it will also be published simultaneously around the world, including in Brazil, Indonesia, Slovenia, Mexico and India.

Arrangements were still being made but Loyola Press plans to bring 10 of the children included in the book to Rome to meet the pope in person, hopefully in February before its March publication date.

“The pope is eager to meet them,” McGrath said. “He was quick to say he would like to make that happen.”

They’ll be traveling with their parents from China, Ireland, Argentina, India, Canada, Kenya, Singapore, Australia, the United States and the Philippines.

Mohammed will not be among them, but 8-year-old Natasha from Kenya will make the trip to Rome. She asked the pope in her letter: “I would like to know more about Jesus Christ. How did he walk on water?”

“You have to imagine Jesus walking naturally, normally. He did not fly over the water or turn somersaults while swimming,” he wrote. “He walked as you walk! … Jesus is God, and so he can do anything!”

While one child wanted to know why parents fight and another why the pope wears such a tall hat, 7-year-old William of the United States asked: “If you could do one miracle what would it be?”

“Dear William,” the pope said. “I would heal children. I’ve never been able to understand why children suffer. It’s a mystery to me. I don’t have an explanation.”

Pope lays out case for mercy in book

Book on Pope Francis’ Philippine visit to be launched