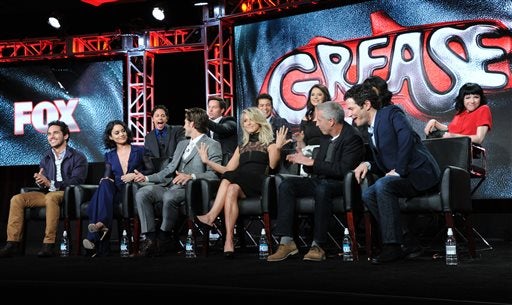 BURBANK, Calif. — Fox is gearing up to give Broadway a serious dose of the Hollywood treatment.

“Grease: Live,” airing Sunday (7 p.m. EST), goes beyond other made-for-TV live musicals such as “The Sound of Music” and “The Wiz,” both of which were huge hits for NBC.

This hybrid of the stage and movie musical blends theater with film, with dynamic camera movements capturing the dance and drama on multiple sets housed in two massive soundstages.

“The scale is insane,” said TV director Alex Rudzinski. “It’s almost half a kilometer from one end of the site to the other.”

Cast and crew members will rely on golf carts — or fast feet — to get between the stages during commercial breaks.

“Grease: Live,” which stars Julianne Hough as Sandy and Broadway veteran Aaron Tveit as Danny, has taken over Warner Bros. studios with its many sets and stages.

Here’s a look at this ambitious television production by the numbers:

— 412: The number of times “Grease: Live” director Thomas Kail can listen to consecutive replays of the song “Hand Jive.”

Fresh off the success of his Broadway production “Hamilton” and his Tony Award for “In the Heights,” Kail is bringing his theater talents to the production of “Grease: Live,” and he’s not daunted by its scope and scale.

“The spirit of theater that’s captured so many of us for so long is you do what you do to make the show,” he said. “Our job is to capture that and see if we can put it through some tubes and send it into people’s homes.”

— 208: And that’s just the number of costumes for the show’s 52 extras. Hundreds more outfits were needed for the dozen main cast members, most of whom change outfits at least four times each, said Tony Award-winning costume designer William Ivey Long, who commandeered an entire empty soundstage on the Warner Bros. lot just to house the show’s collection of clothing.

Creating costumes for this live TV production is different than working onstage, he said, where outfits have to be built “super-duper, eight-shows-a-week for a year.” Because of this show’s more cinematic approach to photography, costume details near the face take on new significance. Long has also been excited to incorporate real vintage pieces into the stars’ wardrobes — items that would be too delicate to hold up to the rigors of theater.

Because stars have to do quick changes during commercial breaks, many of the costumes are held together with magnets. Some stars will also be wearing layers of outfits on top of each other for what Long calls “magical transformations that were not in the Broadway musical and were not in the film either.”

— 45: The number of camera positions needed to shoot scenes in disparate locations from multiple angles. Using 20 cameras, Rudzinski is doing something almost unprecedented in live TV: taking cameras offline so they can be moved and reset for the various scenes.

“We move them over the three-hour broadcast about 30 times,” said Rudzinski, who shoots live shows weekly as a director of ABC’s “Dancing With the Stars.” ”That’s a huge challenge and obviously kind of nerve-racking on a live show to be losing feed and then coming back up.”

He has storyboarded the entire show, like film productions generally do, to time camera movements to the beat — or even half-beat — of the music.

— 45: The number of seconds it takes to travel between stages on a golf cart. But it isn’t idle time: Makeup artists, hairstylists and dressers will ride with the stars between scenes to help facilitate quick changes while the carts are in motion.

“I have one commercial break to go from good Sandy to bad Sandy,” said Hough, confessing that she needs to abandon her tendency to try to do her hair and makeup herself.

— Three: The age musical director Tom Kitt was when he first saw “Grease” in theaters.

“I probably saw it between 50 and 100 times when I was a kid,” tagging along with his older sisters to the movies, he said.

The Pulitzer Prize- and Tony Award-winning composer (“Next to Normal”) also choreographed a dance routine to “The One That I Want” when he was 5 years old, then produced “Grease” as a senior musical at his New York high school.

“I haven’t music-directed it again until now,” he said, adding, “obviously, this is a very different production.”