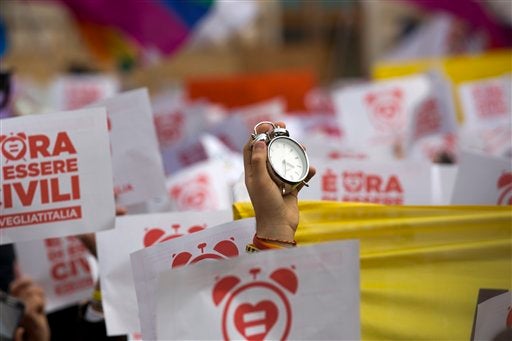 An activist holds up an alarm-clock during a demonstration symbolically asking Italian lawmakers to wake up and approve a law in favor of rights for gay couples, prior to a debate to be opened in Italian parliament to change laws on recognition of rights for same-sex couples, in Rome, Saturday, Jan. 23, 2016. (AP Photo/Andrew Medichini)

ROME— In Italy, family is considered so sacred that marriage is lauded in the Constitution. But what kind of family?

That has become a bitterly divisive question in a nation where the Vatican packs considerable political weight and where gays have grown impatient as other traditionally Catholic European countries have either allowed same-sex couples to marry or legally recognized their civil unions.

On Thursday, Italy’s Senate will plunge into a debate on proposed legislation to grant legal recognition to “civil unions,” including those of homosexual couples, without equating the partnerships to marriage.

The coalition government of Premier Matteo Renzi is pushing for the legislation, which includes the right of inheritance, to receive the pension of his or her deceased partner, or to make medical decisions about a partner in hospital. But one provision of the bill, to permit gays to adopt the biological children of their partner, has generated animosity even within Renzi’s coalition.

Opponents fear the so-called “stepchild adoption” will encourage male couples to turn to surrogate mothers abroad. Surrogacy is banned in Italy, as well as in many other European countries. Headlines warning of a surge in “rented uteruses” have abounded lately in Italian Catholic publications, as well as in more conservative lay newspapers.

Intentionally or not, Pope Francis has waded into the debate. Last week, in an annual address to the Vatican tribunal that grants marriage annulments, the pontiff declared: “There can’t be any confusion between the family intended by God and every other kind of union.”

And the head of the politically influential Italian Bishops Conference defended Catholics’ having their say in the debate. Laity must “inscribe divine law into earthly life,” Cardinal Angelo Bagnasco said.

According to Vatican teaching, homosexual relations are sinful and marriage can only be between a man and a woman.

Pro-Vatican elements among Renzi’s Democrats are among those insisting the adoption provision be jettisoned, and the premier has told lawmakers “to vote according to your conscience.”

While politicians squabble over what rights gay couples should have, Italian courts increasingly have been approving the adoption by gays of their partner’s biological children on a case-by-case basis.

Besides the faith factor, the proposed bill has prompted a rethink of what constitutes family in a country where people rely on relatives or spouses when the state falls short. Grandparents care for children because public daycare spots are scarce; hospital staff often assume Italians will bring hot meals to their relatives’ bedside.

“Culturally, family is the ballast to Italian identity,” said Lisa Colletta, a professor of gender studies at The American University of Rome.

In her apartment in Rome, Martina Castagnole wakes in the middle of the night to care for 7-month-old Gabriele, and during the day plays with him, exactly like the boy’s biological mother, her partner, Giulia Filibeck, does.

“But in everyday life, I have no rights. I can’t take my son from school, I can’t travel with him abroad. If the baby is in the hospital, I cannot be involved” in his care, Castagnole told The Associated Press.

She said neighbors, or people whom the couple run into in the supermarket, accept the baby, which was conceived with sperm from a donor in England.

“It’s ever more frequent that people we meet, doctors, others, treat us and talk to us like we are both parents,” Castagnole said.

“Society is more advanced than the law,” she added, while lawmakers “have pressures on them, political, cultural, from the church.”

Opponents of the proposed legislation fear gay civil unions will pave the way for gay marriage. They have promised to draw 1 million people to Rome’s ancient Circus Maximus field on Saturday to loudly lodge their objections to “stepchild adoption.”

“We uphold the position of the Catholic church on marriage, a millennia-old institution,” said a rally organizer, Paolo Maria Floris. He stressed that organizers support “individual” rights for gay couples such as inheritance. “But the rights of children come first; they need to have a mother and a father.”

Next weekend’s rally comes in contrast to rallies in nearly 100 cities nationwide last Saturday, when homosexuals and other backers of the legislation sounded alarm clocks at the same hour to signal that the time has come to give rights to same-sex couples.

In a curious twist, some backers of the bill hail from the conservative fold of former Premier Silvio Berlusconi, whose fiancee is an outspoken advocate for gay rights.

The bill’s path will likely be a long one. Opponents have tacked on several thousand amendments in a bid it to slow down the process, and it is not known when lawmakers will vote on the proposal. TVJ