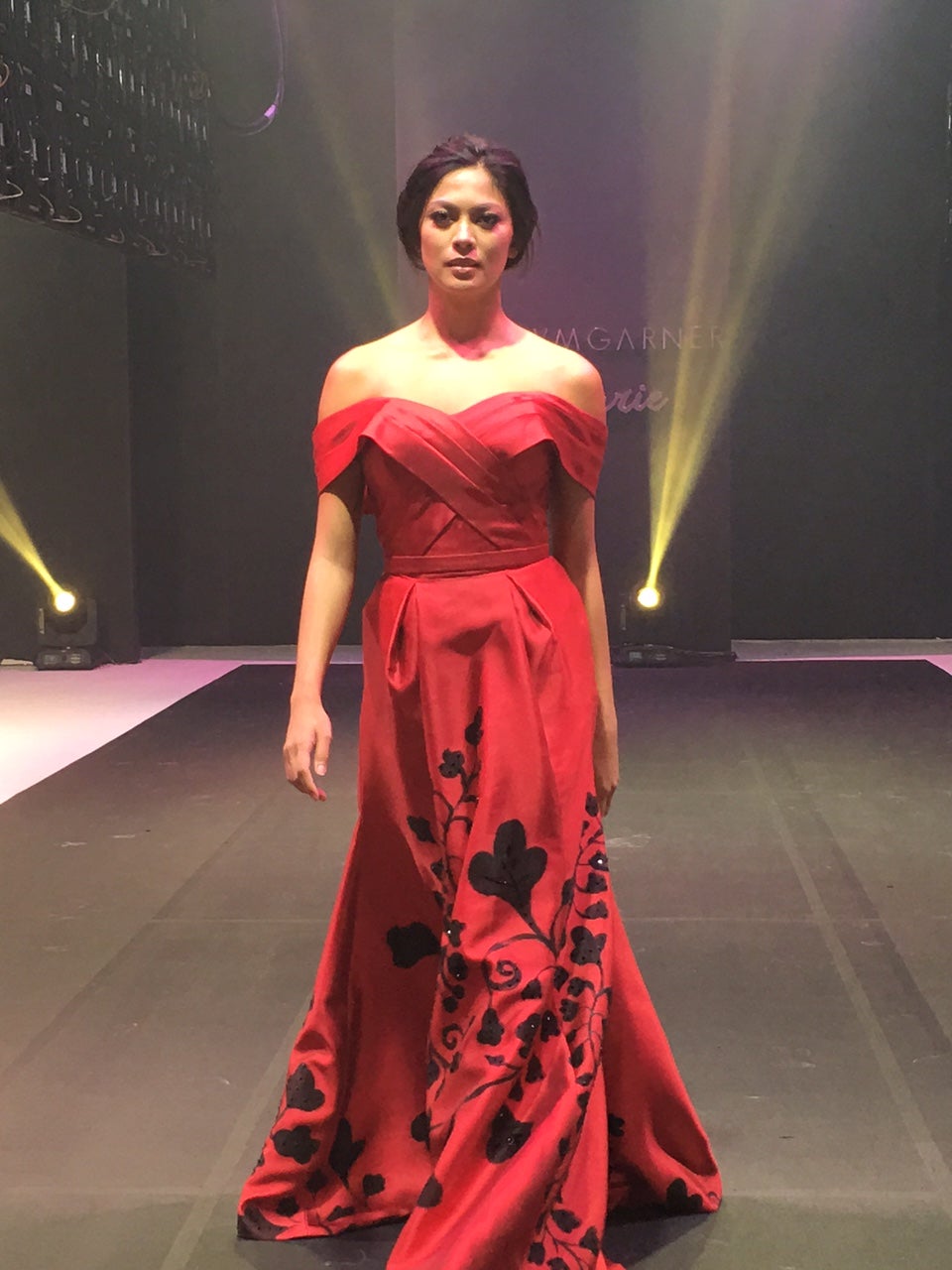 It was an evening of hyphenated talents, as designer-racer Mark Bumgarner and actress-painter Heart Evangelista collaborated for the first time in a recent gala show at Dusit Thani’s grand ballroom in Makati.

Twelve of Bumgarner’s 56-piece collection were for the Mazda segment, which opened the show. Evangelista’s handiwork was featured in the show’s main segment, which was graced by such celebrity models as Lovi Poe, Maggie Wilson-Consunji and Ariella Arida.

The young designer focused more on tailoring and construction. His preference for corsetry was evident in the number of dresses with corsets.

“I’ve been trying to master corsetry for the past two years,” he said. “This show is the result. That’s what Heart likes about my stuff. I’ve been saying to my clients that if you want to look good, you have to sacrifice a little.”

Except for pops of red and green, Bumgarner stuck mostly to neutral colors such as white, black, gray and nude. Neutrals, he said, allow women to get away with accessories in the “craziest of colors.”

“A lot of people wear loud shoes, loud bags,” he noted. “I hate it when the accessories’ colors clash with the clothes.”

“I didn’t want to obscure Heart’s paintings so I did minimal embellishment,” said the 24-year-old Bumgarner, who started designing three years ago, after racing since he was 6.

For her part, Evangelista found the endeavor both inspiring and challenging because there was little room for mistakes, as she had to paint on finished dresses.

Bumgarner gave Evangelista the freedom to do anything she wanted, but the newly minted artist was quite mindful of what she did. Instead of painting with abandon, she reined in her creativity to allow her collaborator’s clothes to shine.

“We both gave each other freedom to do whatever we wanted,” said the 30-year-old Evangelista. “I guess the friendship factor was also important because we trusted each other.”

In a way, Evangelista’s paintings are an extension of her personality: colorful yet reserved and sophisticated. Before she sat down with her brushes, she and Bumgarner agreed on a floral theme.

Of the 15 artworks she presented, Evangelista’s favorite is the finale, which she considers the biggest and most difficult.

“It is quite detailed,” she said. “The colors are muted, but if you look closely, the painting is full of details.”

The time she allotted for each piece varied. It took her a week, for instance, to paint on one gown because she had to wait for the paint to dry before adding another layer. Sometimes she was able to do two gowns in a day.

The two met last year when Bumgarner dressed Evangelista for a corporate event. They instantly hit if off. Before long, they were planning their collaboration over dinner at Evangelista and her husband Sen. Chiz Escudero’s house.

“It was a passion project for both of us,” said Bumgarner, who hasn’t completely turned his back on racing. “For her it was painting. For me, it was a chance to push myself further as a designer.”

Before their collaboration, Bumgarner had no plans of staging a gala. After cutting back on his racing to “start earning a living,” the newbie designer was content to learn and quietly work on the sidelines. All that changed when he met Evangelista.

Evangelista, who did the artwork for journalist Arnel Patawaran’s second book, first wanted to paint on shoes and bags. She had to set her original plan aside when she and Bumgarner agreed to work together.

In a bid to be taken seriously as an artist, Evangelista refrained from modeling in their joint show.

“I think it’s unfair and redundant to use one’s celebrity to walk down the runway with your paintings,” she said. “This time I wanted to disconnect my work as a painter from my other work as an artista.”

Will Evangelista change her mind? Her fans would have to wait, as the two have already begun planning their next collaboration.