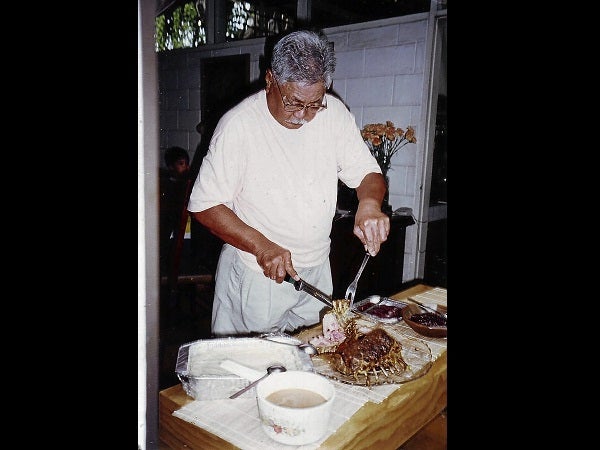 Celebrating Daddy at the Christmas table 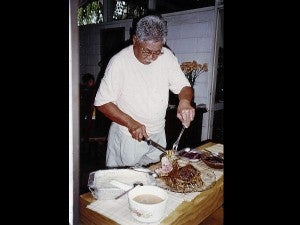 This year, said son Mol, let’s plan the Christmas menu as dad would have, as if he were still alive. “All meat??!!” shuddered Son No. 2’s wife Lilli-Ann. “How can it be complete,” wailed Wendy, “when there’s no Collins Street Bakery fruitcake this year? Dad was so ill in May I’m sure he forgot to order it or it would have arrived in November.”

That imported fruitcake! From Texas, Dad had ordered it faithfully for a good 15 years. It became a family joke, the cover of its can showing a snowy scene with an antique carriage and a couple in top hat and bonnet.

The children dissed him about it, but come parting time everyone would demand their share to take home because the corny cake, oozing with nuts and glazed fruits, was truly delicious.

Three weeks before would be the preparation of the tamales which defined our Christmas season, like carols. It would be the Cavite tamales, Dad’s mother’s recipe, consisting more of ground roasted peanuts than toasted rice, and a brilliant red-orange achuete color that made all other tamales pale in comparison. Our tamales was rich in flavor, thicker and tougher to stir as the broth was absorbed, the cook soon yelling for the driver (who loved to cook more than to drive) to take over the stirring. Top with hard-boiled egg, bacon and chicken strips, wrap in banana leaves, tie by twos and simmer.

The batch of tamales in the wok was tightly guarded by Daddy; it was for immediate family only. Each offspring claimed his rightful share, eating the tamales sparingly in their homes and saving some in the freezer to last all of the holiday season.

Dad’s special old-fashioned galantina was made a week before Christmas. Spread deboned chicken on kitchen table—it will look like a blob. Force into a small slit on its belly the galantina stuffing of ground pork mixed with pickle relish. 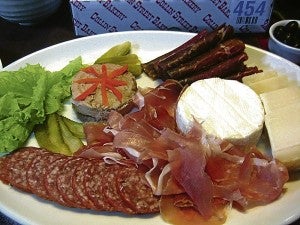 Also whole Vienna sausages, hard-boiled eggs, green olives, and pimientos. It will now look like a fat blob. Shape the blob into a roll and sew up (an obstetrician in the family would help). Simmer in a broth of chicken bones. Cool. Make sure the thread is removed before slicing, or it will be a holy mess.

Galantina was the gift for close friends and relatives approved by Dad. Once I purloined one for my pal Mariel, but was immediately detected since Benny de la Cruz’s had gone missing. The gifts were wrapped in red, green or yellow cellophane and tied with recycled ribbon.

The galantina was also part of our Christmas spread but not the star. Dad always insisted on making the pica-pica himself—the classic stuff, no fusion or creative variations allowed. So it was jamon Serrano wrapped around a small slice of melon, Italian salami in loose rolls with black and green olives, various European cheeses and dips, and Planters mixed nuts. Dad always managed to sneak in a big bowl of deadly Lapid chicharon with laman sticking to it (groan). This was always wiped out first.

From Arcus came the unending supply of vintage wines from travels abroad. At one time a canned ham was also a side attraction. All that awful meat was served with huge piles of great, daddy-directed mashed potatoes. Another accompaniment was a healthy tossed salad of romaine, arugula, lolo rosso, apples and nuts (which nobody touched). 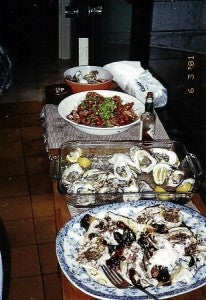 Also a fruit salad of green apples, canned fruit cocktail, peaches, nata de coco and grapes, all laved with thick cream which didn’t know whether to be a part of the meal or the desserts. BTW, the soup was the eternal Fernando chicken asparagus soup. For peace, the reigning carnivores would serve a token baked fish on the wayside.

On two Christmases, Dad had insisted on having roast turkey instead. He loved carving meat, and turkey always looked elegant. We suspected Dad just wanted to show off his set of expensive carving knives. On both occasions the turkey breast ended up in the baon of the grandchildren for a week.

When the native lechon regained its popularity, the lamb and roast beef and turkey were edged out. BingBing’s Cebu lechon, ordered from some secret source, reigned. It was always the driver assigned to do the chopping of the lechon—on a thick slab of stand-alone chopping board dragged in from the kitchen.

The desserts were the assignment of sweet-tooth Lanelle and also Bing Bing, from macadamia sans rival to decadent chocolate cake, to Estrel’s caramel cake, to lemon meringue, to ube cake, to pili nut tarts and Kisses. Our kids’ families enjoyed one another’s company and stayed all day on Christmas. After the musical numbers and the distribution of gifts (name called out, each person approaching, including all the help from the four houses), we napped or chatted on the bed, the sofas and the rug.

As if that were not enough, at 5 p.m., as inevitably as the impending 7 o’clock Mass, Mol would serve his special toasted pancit. And the eating resumed again—the wine, the coffee and the desserts, the pica-pica, the cheeses, the ham, the fruits that Wendy and Roy brought. Finally it was time for Mass, and thereafter everyone and their gifts were gone.

One Christmas, a grandson, Franco, wrote a play for the kids to stage. It was called “The Slaughter of the Animals,” a morality tale on the lamb, the cow, the pig, the turkey and the chicken sacrificed for Dad’s Christmas table. Do you think it made anyone feel guilty? Guess again!