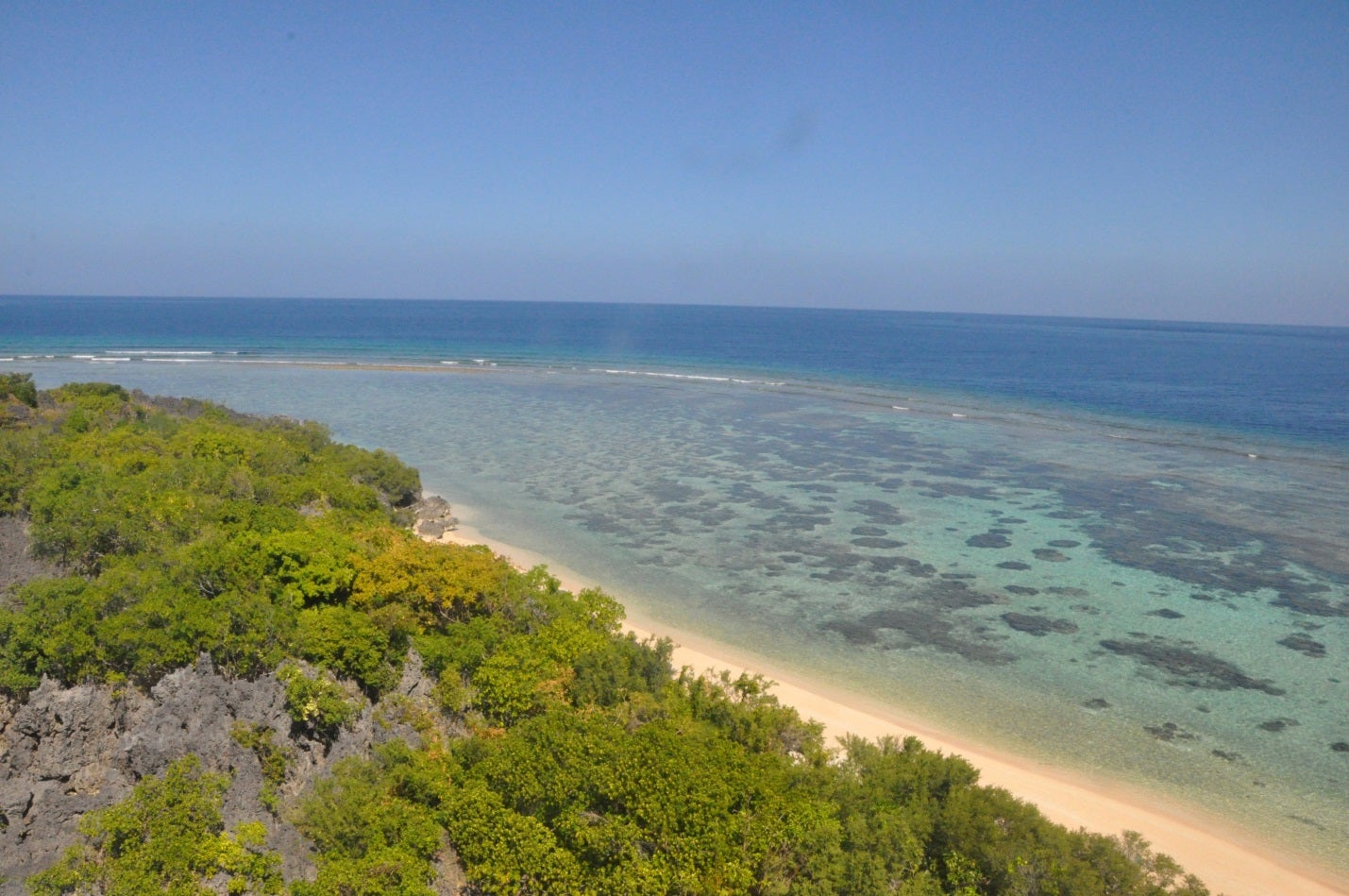 PHOTO BY ORLANDO A. MALIWANAG

Apo Reef: A lesser-known gem in the West Philippine Sea

It started at the invitation of a photographer-friend who would be on a photo shoot assignment in the Apo Reef Natural Park in Sablayan, Occidental Mindoro. It immediately snowballed into a small group trip after some of our common friends decided to tag along. Though we were only on the other side of the island in Oriental Mindoro, it would be the first time we would all visit the Apo Reef.

With invaluable assistance from our friends in the local government of Sablayan, the trip was all set including the necessary documentation to enter the natural park. Hosted by our local friends, we stayed overnight at Sablayan town proper and, over some–no, many–ice-cold bottles of beer, feasted on grilled or fried talakitok (trevally), a large stone fish (which our friends claimed as a potent aphrodisiac), and of course, large chunks of yellow fin tuna which Sablayan is famous for. Sablayan, by the way, is the second largest producer of tuna next only to General Santos City. The mayor of Sablayan, Mayor Ed Gadiano, graciously dropped by and joined our session.

Early morning the next day, we left the port for an hour 15-nautical-mile travel to Apo Reef. The sea was a little bit rough because of the amihan (northeast monsoon). Along the way, we saw fishing boats of different sizes and colors, and the dark blue sea was beautifully tinted by the golden glow of sunrise.

Since I had no time to do research prior to the trip, I had little knowledge of what to expect in Apo Reef. Not always, but sometimes it’s more exciting to only know minimal details of your travel destination and let things unfold as you explore the place. Less expectation, less disappointment.

We headed directly to the Apo Island where the park facilities and staff are based. The island with its iconic lighthouse, surrounding blue green water, green vegetation, and white and pinkish sand was simply breathtaking.

After an orientation from a park staff, we learned that Apo Reef at 34 square kilometers is the country’s largest and the world’s second largest contiguous reef next only to Australia’s Great Barrier Reef. It was declared a natural park in 1996 by virtue of Presidential Proclamation No. 868. It is also on the tentative list of the United Nations Educational, Scientific and Cultural Organization (UNESCO) World Heritage Sites.

A composite team from the Department of Environment and Natural Resources (DENR), municipal government of Sablayan, and the Philippine Army is overseeing the administration and protection of Apo Reef.

With only less than 24 hours of stay, we immediately began exploring the island. Most of the island has thick vegetation of beach associated trees and mangroves. Inside the forest, I spotted some tikling (eastern/pacific reef egret) and nests of tabon birds. I could hear calls from some “invisible” birds.

Then we headed to the mangrove forest. We traversed the elevated bamboo and wooden walkway among very old mangrove trees. At the end of the walkway, the view of the lagoon was mesmerizing.

We spotted a baby whitetip reef shark at the shore prompting a friend to comment: “So this is their training ground. Starting first with the bagaong (grunter) to hone their killer instinct before going out of the sea”. Another friend remarked: “I hope the dad is not around here.” Reef whitetips are actually harmless to humans.

Up close, the lighthouse was much taller than my impression when we were approaching Apo Island. This 110-foot facility replaced the American period lighthouse built in 1905. Having moderate altophobia, I was a little bit apprehensive in climbing the lighthouse. But going to Apo island without seeing the best view of the island and the reef is unforgivable. So, mind over matter, I carefully navigated the narrow steps up to the second level of the view deck.

Up there, the 360-degree view was stunning – the forest canopy, the lagoon, the turquoise water, Apo Menor island, the sharp black limestone formations, the long stretch of white and pinkish beach, and the rocks and corals that could be gleaned from the shallow parts of the water.

Going down the narrow steps was more challenging than I thought. But I survived.

The afternoon was spent chatting with the park staff and snorkeling. There were lots of table, branching, and brain corals and a few soft corals. A small solitary barracuda kept on swimming near me. I spotted a peacock mantis shrimp. There was a kaleidoscope of colors of different fishes—rabbit, butterfly, damsel, pipe, wrasse, parrot, sweet lips, snapper, etc. Baby giant clams were aplenty in the area. But no turtles.

Then I reached the drop-off where the silhouette of the wall and fan corals was majestic, and the view of the dark abyss was both scary and inviting. Darn! Why did we not bring the diving gear?

The rest of the afternoon, we were exchanging stories of our experience on the island—both true and exaggerated, the resident ghosts (why do all national parks have resident ghosts?), politics, environment, life, and the possibilities of saving the entire universe both from Steve Harvey and from the Darth Vaders of destruction.

Over a cup of coffee, we watched the red and purple sunset. And how do we often see the sun set and the moon rise at same time?

In the evening, over moonshine, my friends were hoping that a turtle would crawl up the beach to nest. But I was not optimistic. Surveying the beach earlier, I’d seen no traces of turtle tracks old and new. The park staff told us that it was not the season for turtle nesting. Having had the privilege of witnessing thousands of nesting turtles and hatchlings over four years in Turtle Islands Wildlife Sanctuary in Tawi-Tawi when I was still working with an international conservation organization, I sorely missed seeing this shy and beautiful creature.

Except for the turtles, Apo island reminded me so much of Baguan in the Turtle Islands. The beauty of nature and biodiversity. But it also reminded me of how much our national government was taking for granted these national treasures by not giving decent funding support to run these national parks. But in Apo Reef, it was heartening to witness that the local government of Sablayan and some NGOs were trying their best to augment some of the gaps.

“Fish and turtles don’t vote,” a friend sarcastically jibed. I know, but I still hope that one day they will realize how important these treasures are and put their money where their mouth is and give a care at least to the level of how much our Southeast Asian neighbors care for their natural heritage.

The next morning, while the sun was rising, we headed back to the town of Sablayan. As if on cue, a pod of spinner dolphins appeared on the right side of our boat for a few minutes before disappearing in the dark blue water beautifully tinted by the golden glow of sunrise.

This is my Apo Reef 101. I’ll be back soon. And I’ll make sure that the diving gear is on—exploring the drop-off and beyond, the shipwrecks, the myriad of marine creatures, the rocks and reefs, to constantly remind me that humans are not the only important thing on earth. CDG

(The writer is the co-founder of the 7,000-strong Cybermovement to Stop Mindoro Nickel Project that seeks not only the declaration of Mindoro island as a mining no-go zone, but also its declaration as an agriculture, tourism and biodiversity reserve. The biggest part of a Malacañang-approved large-scale nickel mining project is located in Sablayan, where Apo Reef is situated. Sablayan also hosts two other national parks: F.B. Harrison Game Refuge and Bird Sanctuary and part of Mt. Iglit-Baco National Park which is also an ASEAN Heritage Park.)

Cagsawa Ruins near Mayon to get a face-lift