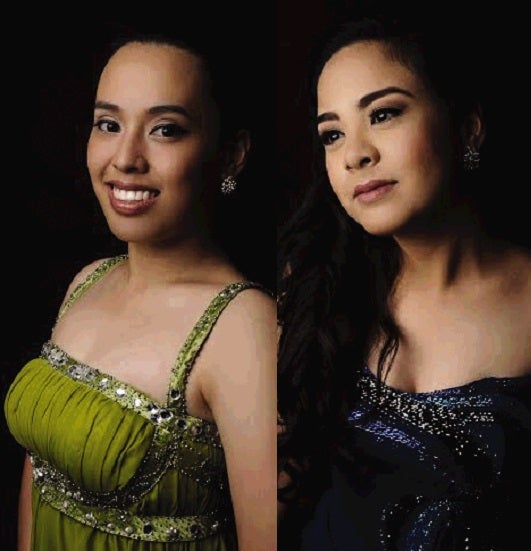 Michaela Fajardo and Myramae Meneses are featured in “Love in the Time of Opera,” to be held Feb. 6, 8 p.m., at Power Mac Center Spotlight, Circuit Makati. PHOTOS FROM ELIZABETH LOLARGA

Where sopranos Renee Michaela Fajardo and Myramae Meneses are headed for in August this year is where Daniel Craig, Orlando Bloom, Alfred Molina and Ewan McGregor were trained.

The Guildhall School of Music and Drama in London, ranked among the top music schools in England for vocal studies and among the toughest to get into, may have its first Filipino students in Fajardo and Meneses after they bested 2,000 applicants.

A special fund-raising concert (for their transportation and living expenses), called “Love in the Time of Opera,” will be held on Feb. 6 at 8 p.m. at Power Mac Center Spotlight, Circuit Makati (site of the former Sta. Ana Racetrack).

The songs lined up are: “Votre Toast” from “Carmen”; “La ci darem la mano” from “Don Giovanni”; “The Merry Widow Waltz”; “Makikiliti Ka” from the zarzuela “Walang Sugat”; “Il core vi dono” from “Così fan tutte”; “Sous Le Dome Epais” from “Lakme”; “Fra gli amplessi” also from “Così fan tutte”; “You’re a Queer One, Julie Jordan”  and “If I Loved You” from the Broadway musical “Carousel”; “O Soave Fanciulla” from “La Boheme”; and “Tonight” and the balcony scene from “West Side Story.”

Young Fajardo and Meneses both started as violinists under the Philippine Research Development for Instrumental Soloists. The latter started violin lessons at age five and was about to become an MSO member  when she decided to major in voice in college.

As early as her sophomore year at the Philippine High School for the Arts where she was a violin major, Michie got enamored with singing whenever she saw the voice majors rehearsing. Her teacher, Jeffrey Solares, now MSO executive director, told her to continue with the instrument, then see for herself later if it was still what she wanted.

She wanted something else. That desire landed her on the doorstep of Camille Lopez-Molina and husband Pablo, the tenor, for voice lessons. He was impressed and called Sr. Mary Placid Abejo of St. Scholastica’s College to excitedly describe their protégé, whose voice held much promise of glory. The nun right away gave the girl a scholarship without even hearing her first, trusting Molina’s recommendation.

Lopez-Molina considered the two’s being violinists or instrumentalists first an advantage over others who are vocalists foremost.

“They studied their instrument first before the voice. They can step away from the instrument and know when to be technical,” she says.

Meneses racked up the 2010 grand prize at the National Music Competition for Young Artists and was first runner-up at the Jovita Fuentes vocal competition. She took master classes under Sumi Jo, Nelly Miricioiu and Arthur Espiritu, sang with Espiritu in a night of bel canto songs and also for Pope Francis at his papal masses at the Manila Cathedral and Luneta Grandstand.

She describes herself as being in that stage where she’s doing “a lot of technical stuff, working on interpreting the music along with the words and not just sounding beautiful.”

Fajardo says singing solo with the MSO last year in the “Rush Hour Concert Opera vs.  Broadway” was a highlight in her life. As for her dream role, she says, “I don’t know much of the repertoire that’s suitable for me, so I’m gonna say Mimi from ‘La Boheme.’”

Meneses’ choice is the role of Adina in “L’elisir d’amore” with a full orchestra.

Both believe there is nothing like classical music. “I can’t hang out with people who don’t know it,” says Meneses. “You must have an open mind. Let the piece teach you.”

“It’s so sad that people don’t get it—an entire world in a song!” adds Lopez-Molina. “It’s nothing rarified, but it’s part of what we do. You cannot not do it without your brain working, so open up to the music and let it open something for you.”

The Molina couple’s hope is that in the tradition of true scholars, Fajardo and Meneses will go out, come back and bring what they have learned to their home country.