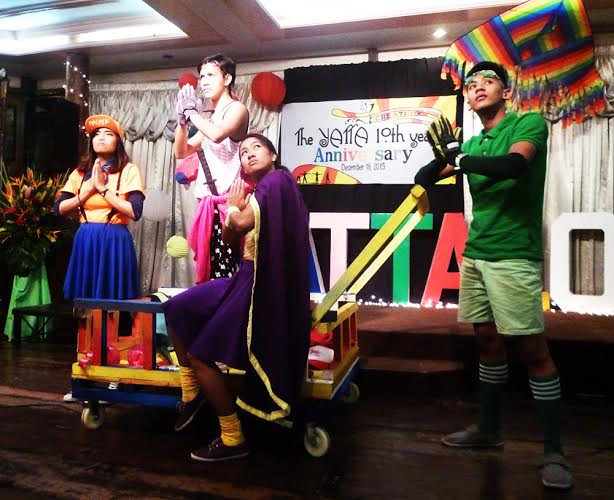 Current members of Youth Advocates Through Theater Arts perform vignettes from the group’s past productions at the 10th-anniversary celebration. PHOTO FROM IAN ROSALES CASOCOT

It has been 10 years since Dessa Quesada-Palm, the doyenne of Negros Oriental community theater, founded the Youth Advocates Through Theater Arts—or Yatta to the rest of us who have followed its development over the years.

It grew organically from a series of theater workshops—then called Lambigit—that Dessa began doing for the community after her arrival in Dumaguete sometime in 2003.

In Dessa’s recollection of those early years, the Lambigit workshops should have ended with just a final theatrical activity for everyone involved. But seeing the faces of the young participants, she felt a calling to do something grander, something that went beyond the original purpose of that workshop.

She remembered telling the participants: “Would you like for this to go on, if you feel like it?”

They said yes—and that’s how Yatta came to be.

The first Yatta  show I saw was “Kikay Kalaykay,” a small musical production about a girl growing up dreaming of a good future while living in a dumpsite. This play was first staged at the Fleur-de-Lis Hall of the Saint Paul University Dumaguete campus.

That was in 2007, but it might as well have been staged only yesterday. Where have the years gone?

Last Dec. 18, at the celebration of Yatta’s 10th anniversary at The Spanish Heritage in Dumaguete City, we were reminded by Yatta Board of Trustees member Glynda Timtim Descuatan why the troupe’s logo is a bunch of young people flying a kite.

“The kite soars,” she said, “but it soars high and constant in the wind because it is grounded by helping hands that tug at it.”

For the anniversary, we were treated by current company members to a theatrical production that recalled, in vignettes, some of the group’s greatest hits, beginning with one of Yatta’s first efforts in 2005, “Koko Kaka,” a children’s play—really a monologue—that illustrated the virtues of kindness and cooperation.

The retrospective ended with a restaging of the finale from “Scharon Mani,” the triumphant 2015 jukebox musical that sprang from a collaboration with the indie musicians from the Belltower Project and the Silliman University Cultural Affairs Committee.

The celebration gave us two gentle reminders about Yatta.

First, that this community theater group is about friends and supporters being able to gather and give back to the community. Indeed, we have seen how Yatta has touched many lives beyond its members, coming to involve many of Dumaguete’s brightest and most talented in the pursuit of using theater for a social purpose.

The second reminder—and perhaps the more important one—is that Yatta is about empowering the community’s youth to get engaged in social issues. This is its greatest strength.

Junsly Kitay, one of the older members, is the perfect example of a Yatta success story. Once a young boy from the city’s slums, he seemed destined to follow the usual trajectory of failure because of poverty. But theater, through Yatta, gave Kitay a ticket out of that life.

“If I had not joined Yatta,  I probably would have been part of the problem that you will have to solve,” he said. “Now, I am only too happy to be part of the solution instead. It’s true that theater is life; through our performance, we can practice what we wish to happen and see in our society: for a peaceful community, for respect for one another and working for the good of everyone.

“My life may not be perfect, but I am blessed with my Yatta family,” he added. “I still have many struggles in life; I don’t have everything I want, but I do have all I need. I may not be there yet [in terms of my dreams], but I am closer to it today because of Yatta.”