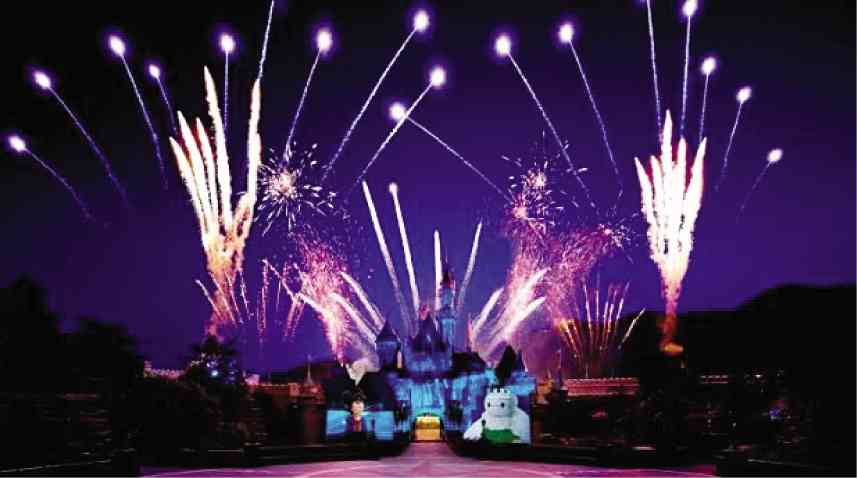 THE “DISNEY in the Stars” fireworks has sophisticated projection-mapping technology.

Hong Kong Disneyland Resort presents a Broadway-style show and new attractions for its “Happily Ever After” celebration of its 10th anniversary.

The event features a live musical, “Mickey and the Wondrous Book,” which brings to life seven beloved Disney tales. With a mixture of modern and classic elements in the story, music, choreography, costume and set design, the new 28-minute production opening at Disney’s Storybook Theater begins with Mickey Mouse and Goofy discovering that a wondrous book exists in a library.

“Mickey and the Wondrous Book,” performed by 70 local and international talents, features 23 original costume designs and 63 pieces of instruments culminating in the 10th anniversary theme song, “Happily Ever After.”

“After eight weeks of rehearsals, the crew of over 200 production team members from 10 different nationalities are committed in delivering a world-class performance and providing our guests a memorable experience,” said David Lightbody, director of entertainment and costuming at Hong Kong Disneyland. “Our Filipino talents are playing important roles in this show. Many of them joined us even before the park was opened 10 years ago.”

The creative team worked closely with musical directors and arrangers from the United States and gave all-time favorite Disney classics a contemporary twist for guests of all ages to enjoy.

As Mickey Mouse travels from chapter to chapter, the music landscape changes, too, from Bollywood to pop, Broadway-style musical to hip-hop and gospel to jazz.

“It’s quite an exciting journey,” said Rony Fortich, the Filipino musical director of Hong Kong Disneyland, who joined in 2005.

“We are proud to have talented Filipino cast members Gian Magdangal and Raki Vega singing the 10th anniversary theme song,” Fortich noted. “We are also thrilled to have Janella Salvador singing the song both in English and Tagalog for the Philippine market.”

The “Disney in the Stars” fireworks is made more exciting by sophisticated projection-mapping technology.

Every night, Sleeping Beauty Castle is set aglow in the all-new moving light projection show. The castle serves as a giant stage to present a new cast of 49 beloved Disney friends, including 16 characters from “Inside Out,” “Finding Nemo,” “Big Hero Six,” “Cars” and the upcoming release, “Finding Dory.”

The Fairy Tale Forest, launched on Dec. 17 at Fantasyland, recreates the scenes in “Snow White and the Seven Dwarfs,” “Cinderella,” “The Little Mermaid,” “Beauty and the Beast” and “Tangled.”

The music-box scenes come to life when activated to reenact Disney Princess stories.

Disney’s magical fairy, Tinker Bell, will be in Pixie Hollow, awaiting to meet visitors and sprinkle some magical pixie dust.

“We have spent over two years building Fairy Tale Forest,” said Kelly Willis, director of creative development and show quality, Walt Disney Imagineering. “It is an intricately designed maze set in a beautiful garden setting, presenting spectacles of five cherished princesses at every corner.  This attraction is bound to give guests more opportunities in creating snapshots of the Disney fairy tales.”

There will also be special editions of 220 new gift assortments and 60 10th anniversary food and beverage packages available across the park and the two themed hotels. Whether it’s character dim sum at Crystal Lotus, breakfast with Disney characters at Enchanted Garden of Hong Kong Disneyland Hotel, there are plenty of choices for guests.

A range of “Star Wars” merchandise and F&B items for children is also available.

Filipino guests may avail of the Limited-Time Room Offer, which saves them up to 30 percent as they book any hotel room at the two Disney-themed hotels until March 31.

In addition, the “Play & Dine” Offer is available until tomorrow, Jan. 31. Guests can enjoy a combo meal with a one-day ticket package at HK$499 or a two-day package at HK$680.

Filipino guests can find out more about the park’s 10th anniversary on the Hong Kong Disneyland Facebook page for the Philippines. Visit  facebook.com/hkdisneyland.pa/