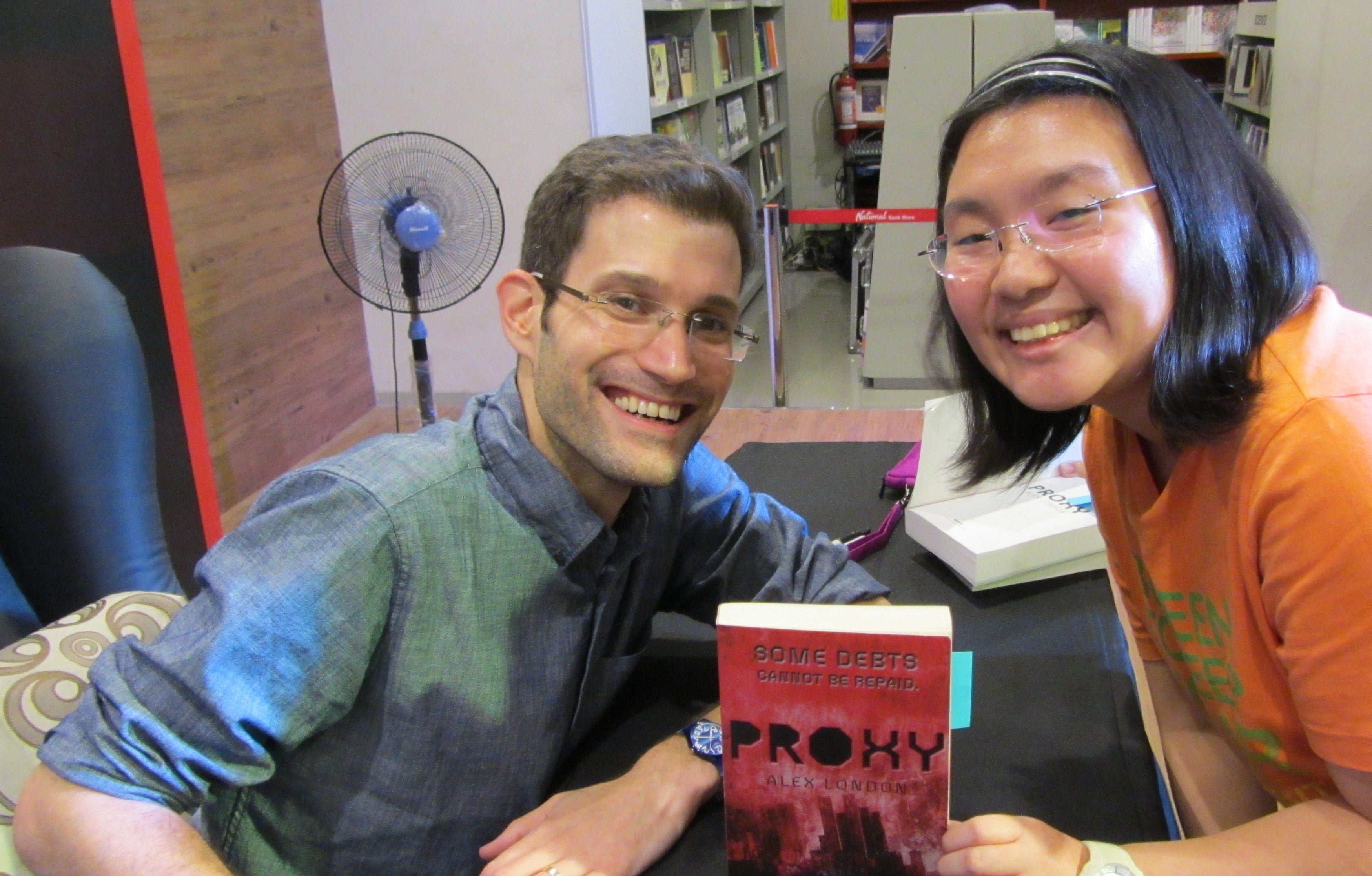 THE AUTHOR with Alex London

‘Tell your story with honesty and heart’

By: Angelica Y. Yang; Student correspondent; University of the Philippines Diliman 10:50 AM January 30, 2016

Clad in blue polo and jeans, he looked like a normal bookworm, making his way around the bookstore. However, everyone knew that he wasn’t just any other bookworm.

And he’s the sole reason why a hundred people gathered inside National Bookstore Glorietta, eagerly waiting for him at his Jan. 16 book-signing event.

And then he went straight to his book-signing event. Asked what he talked about in his writing workshops, he said he discussed “Proxy,” and gave tips and tricks on how to write a compelling story.

“Alex London isn’t really a mainstream author,” gushes Alia del Rosario, a 20-year-old fan. “In ‘Proxy,’ the main character is something new—he’s gay, and you don’t see that in postapocalyptic novels.”

“I ended up making one of the two main characters gay because when I was a kid, stories like that didn’t really exist,” Alex says. “We didn’t have characters in the kinds of stories that I liked—exciting, action-packed stories. But the sorts of stories you’d see gay characters in were those where somebody had a problem, a secret life, or was ashamed, struggling and miserable, then finally became OK with it until somebody beat him up and he died.

“That’s not the kind of story I wanted. I wanted an exciting action story where a gay character got to be the hero of the story—because I wanted to see that.

“I really believe that there’s no piece of your personality that should limit the kind of story you get to be the hero in—your race, your religion, socioeconomic class, gender, sexuality and disabilities. Anyone can be a hero in any kind of story. You just have to be willing to tell that story.”

“He is one of my favorite authors,” says 19-year-old Apolonio Patron, a librarian just like Alex. “I like his books because of the way he writes—it’s quite quirky and funny.”

“I write because I think people are complicated,” Alex says, taking a sip from his Starbucks coffee cup. “I am the silly guy who writes funny children’s books, but I’m also the serious guy who writes action thrillers about debts, friendship and redemption.

“The world has an infinite number of stories and I’m doing my best to tell as many as I can,” he says, fondly remembering his mentor, Brian Jacques, the British author who inspired him to become a writer. Jacques made Alex realize that writers are normal people, too.

After Alex published his first book with the same publishing house as Jacques’, the two forged a strong bond and have been inseparable colleagues ever since.

When asked about his inspiration for the unsettling world of “Proxy,” Alex says he wanted to explore the things that bothered him in the normal world. “I was looking at the meaning of income and equality, the difference between the haves and have-nots.

“I was looking at the justice system and how different people had different kinds of justice, based on how rich they were. I was looking at technology—how pervasive it was and how, when I go to Twitter, it’s free but it really isn’t free because there were all these ads being thrown at me.

“I was being tracked wherever I went. Then I realized that I wasn’t the customer of the technology that I’m consuming. I’m the product. I’m what’s being bought and sold. My eyeballs, my attention, are being sold to advertisers. And wherever I go, I’m being tracked, I’m being reduced to data point, and I’m being bought and sold. I was looking at what technology and the economic system are doing to us
—and how to find the humanity through that, and how to find the humanity in each other.”

With a thought-provoking story like “Proxy,” it is no wonder that several fans have started clamoring for the book to be turned into a film. The thought excites Alex, as he starts gushing about whom he wants as the actors. “I really want Troye Sivan, a YouTuber, to play Knox. He was in my head as Knox after the book came out. In my head, Syd was Alfie Enoch from ‘How to Get Away with Murder.’”

This humble author has two pieces of advice for budding writers: “The first is to keep reading. There’s no way to be a writer but by reading. That’s how you learn what works and what doesn’t. The second is to keep writing. Even when it gets hard, even though you hate what you’re doing and you think, ‘Man, I have no idea, I’m the worst, I’m not original, no one’s ever going to like what I’m going to say’—we all have those voices. I have those voices. Whoever your favorite author is has those voices.

“Sometimes those voices tell us that we’re not good enough, that no one cares about your story… but, I promise you, if you tell your story with honesty and with heart, there is someone else out there who needs to hear your story. We have a lot of problems in this world, and I think stories are a great way to solve some of them. So just keep going.”