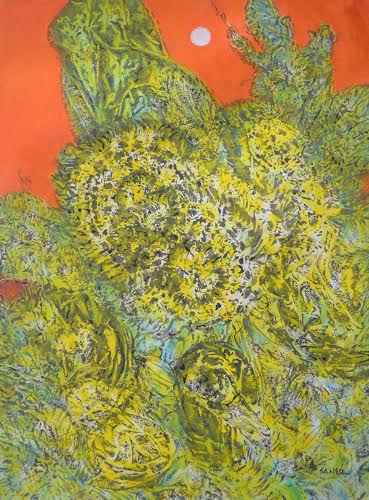 “BLESSINGS of Fortune,” by Juvenal Sanso

ANCIENT Chinese folklore tells the story of the Great Race. As a way to celebrate his birthday, the Jade Emperor called upon animals to race across a river. The first 12 animals who made it across would be given the solemn duty to protect the Gates of Heaven. The monkey, using his characteristic intelligence and penchant for teamwork, helped the rooster and the goat find a raft to cross the river. The monkey came in ninth, and was honored for his cleverness and creativity.

This story led to the formation of the Chinese Zodiac, with 2016 being the Year of the Fire Monkey, a particularly auspicious year since red is the color of both fire and good luck in Chinese folklore. And sharing common characteristics with the zodiac monkey—who was clever and creative—are visual artists who use their own wits and talents to create wonderful paintings and sculptures.

To celebrate the Chinese New Year, Galerie Joaquin will be holding a one-of-a-kind exhibition at the Ground Floor South Court and Basement Concourse of Power Plant Mall in Rockwell.

The paintings and sculptures on display will run along the themes of fortune, abundance, wealth, and red, a color considered very auspicious for the coming New Year.