Filipino-Hawaiians celebrate the journeys of their ‘sakada’ forefathers | Inquirer Lifestyle 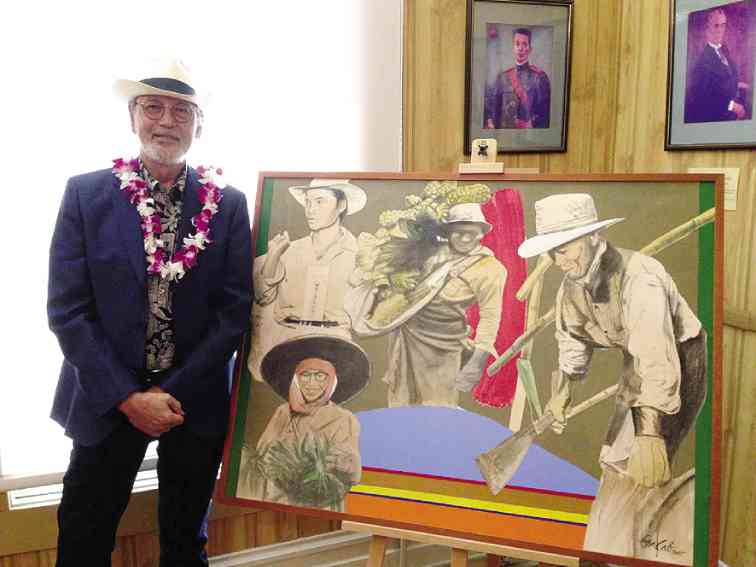 BENCAB and his artwork, the 2015 acrylic on canvas ‘First Migrants’

With my bare hands, I helped build Hawaii,” declares Lilo Bonipasyo, a sakada or migrant laborer who sailed to Hawaii in 1925, in the book by Filipino-Hawaiian scholar Virgilio Menor Felipe, “Hawai’i: A Pilipino Dream.”

It was also a most appropriate and dramatic line quoted by the Philippines’ consul general in Hawaii, Dr. Gina Jamoralin, in her speech during a most special occasion: the      very first celebration of Sakada Day in the island state, held on  Dec. 20 at  Hawaii State Capitol Auditorium in Honolulu.

Through House Bill No. 604, approved on April 9, 2015 by Hawaii’s House of Representatives, the day was declared an annual commemoration of the pioneering struggles of these first migrant laborers, poor men who left behind family and home to try their luck in an unknown land.

The bill was a collaboration between Jamoralin and the vice speaker of Hawaii’s House of Representatives, John Mizuno, and celebrates “the historical significance and strong relationship between the State of Hawaii and the Republic of the Philippines,” while recognizing “the great contributions of Filipinos to Hawaii’s diverse and multicultural society.”

Rep. Eric Singson of the second district of Ilocos Sur and his wife, Candon, Ilocos Sur City administrator Grace Singson, also had great reasons to be in Hawaii.

For one, many of those first 15 Filipinos who got off the SS Doric in the first wave of Filipino migration to Hawaii on Dec. 20, 1906 were Ilocanos: Simplicio Gironella and his four sons Mariano, Vicente, Francisco and Antonio, brothers Mauricio and Celestino Cortez and Prudencio and Cecilio Sagun, and Marciano Bello, Emiliano Dasulla, Julian Galmen, Martin de Jesus, Apolonio Ramos and Filomeno Rebollido.

For another, Singson, an avid art collector, had picked the perfect gift for the Filipino community in Hawaii for the occasion: a sakada painting by his friend, National Artist for Visual Arts Benedicto “BenCab” Cabrera.

After initially hesitating to attend the event in the middle of the Christmas season—and after being on tenterhooks wondering how much the painting would cost, he joked—Singson was overjoyed when BenCab opted to donate the artwork instead.

He thus invited the still prolific, versatile 73-year-old artist, who marked the 50th year of his stellar career in 2015, to turn over the 91 x 122 cm acrylic-and-pencil-on-canvas piece, “First Migrants,” in person.

“That’s interesting, give me some references,” was BenCab’s reaction when Singson first mentioned the commission.

The event would also mark his return to Hawaii after 21 years, after “Being Filipino: Paintings, Prints & Drawings,” his major 12-year retrospective exhibition at the Focus Gallery of the then Honolulu Academy of Arts (now the Honolulu Art Museum), was held in 1984.

The museum still has some BenCab works in its collection, including the provocative “Question of Identity,”

“I was in London for 13 years, and I considered myself a migrant, although I never changed nationality,” he said. “That’s why the stories of migrants have always fascinated me.”

Past works, such as his “Larawan” series, already captured the weathered, haunted faces of Filipinos in London longing for their homeland, people he met while working as a layout artist and photographer for the Balita London newspaper in the 1970s.

“You could see the loneliness. I love faces, because they carry a lot of history,” noted BenCab, who was declared a National Artist in 2006. He even brought along his worn sketchbook from 1984, filled with stunning drawings of the Moncadistas, bearded, mysterious-looking members of a cult once based in Hawaii.

(His friend, the congressman, promptly threatened to steal the valuable sketchbook—in the name of national patrimony, he joked.)

In fact, “Question of Identity” is referenced in “First Migrants,” particularly in the image of a man fresh off the boat, wearing his assigned destination like an identification card around his neck.

As added homage, BenCab included a female sakada in the painting, even if woman workers were hardly mentioned in history books.

Inquirer Lifestyle was invited to cover the historic event, and to join the artist, his partner Annie Sarthou, and the Singsons in Honolulu.

The moment we landed, our party was feted left and right by Filipinos eager to entertain guests. The 15th Annual Scholarship Fund Drive and Christmas Party lunch of the Candonians of Hawaii, headed by president Grace Go and past president Bernadette Fajardo, included an auction of a print version of “First Migrants,” again donated by the artist to raise money.

Grace Singson pointed out the historical marker paying tribute to the first sakada at the FilCom (Filipino Community) Center in Waipahu, where the Christmas party was held, unveiled in September 2006 by President Gloria Macapagal Arroyo for the yearlong centennial celebration of Filipino migration to Hawaii.

In 2015, Candon also played host to young Filipino-Hawaiians in search of their roots via the Ilocano Language Acquisition and Immersion for the Next Generation (Ilaing) program, established by Jamoralin.

The main event, however, was the next day’s Inaugural Sakada Day celebration, which saw a huge turnout by the Filipino community.

With other members of the Senate and Congress, they presented certificates of recognition to 14 of 21 living sakada honored that day, who sat right in front of the stage.

Emme Tomimbang, producer of the documentary “Mabuhay to Aloha: The Hawaii Filipino Experience 1906-2006,” presented an excerpt from the film, and former Society of Seven member “Little Albert” Maligmat sang a few numbers, including a haunting “Hindi Kita Malimot” that left guests teary eyed.

Another moving moment was when a wheelchair-bound sakada forced himself to stand for the Philippine National Anthem— and remained shakily on his feet as the anthems of the US and Hawaii were played.

Jamoralin and Mizuno joined BenCab in unveiling the painting onstage. Mizuno, who is married to a Filipina, was quick to credit Jamoralin for being the “genius” behind the bill.

“Fifty years from now, will Filipino youth know what a sakada is? It’s about culture, heritage, legacy and lineage. Sakada paved the way for greatness for Filipinos of today. Although I was the author of the bill, I would like to defer to Dr. Jamoralin and the Filipinos.”

(Incidentally, Filipinos were in even higher spirits later that evening, after learning that Pia Wurtzbach had been crowned Miss Universe.)

Guests enjoyed a Filipino dinner and crowded around the amiable National Artist (who wore a Havana hat he had just bought) for souvenir photographs; the Candonians’ Bernadette Fajardo and vice consul Joy Espinosa even wore outfits with BenCab designs.

All the while, “First Migrants” stood on proud display, with the sakada depicted in BenCab’s distinct, haunting style.

“What better gift, really, can you give,” noted Singson in happy conclusion. “This is something that will last for generations.”