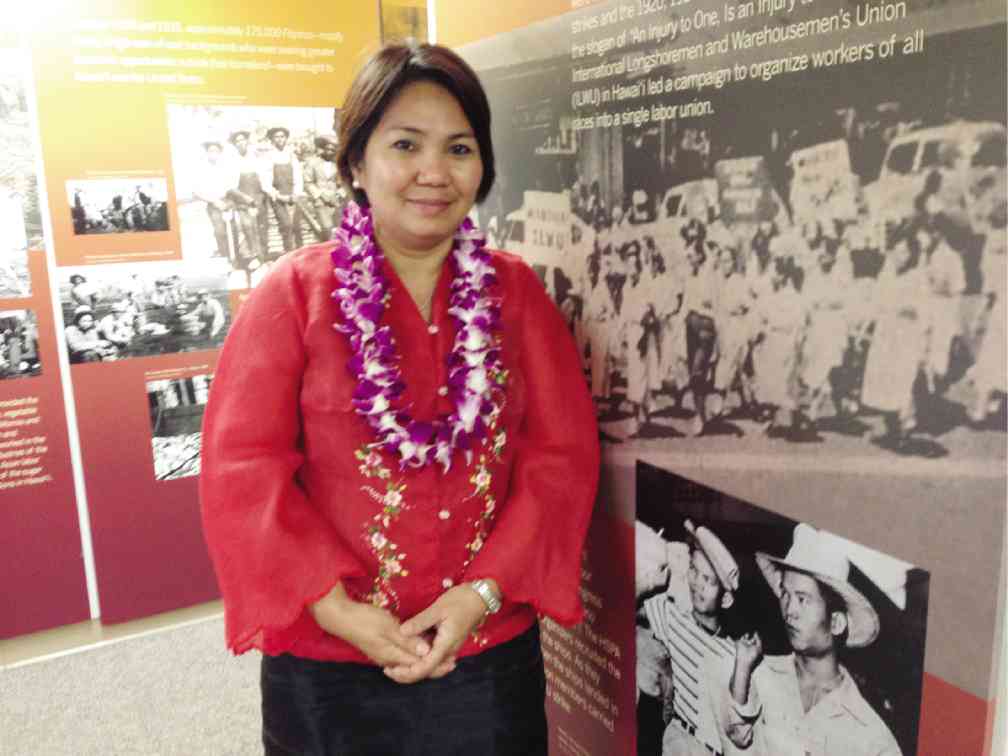 Our woman in Hawaii blooms where she’s thrown

DR. Gina Jamoralin, Philippine Consul General in Hawaii, has a knack for being in the right place at the right time.

As a researcher with the Department of Science and Technology’s Food and Nutrition Research Institute, she heard about an opportunity open to government employees to study foreign languages at the Department of Foreign Affairs. The French class was closed, so Jamoralin opted for Russian—and was eventually encouraged by her teacher to take the foreign service examinations.

“My first assignment was as a protocol and liaison officer for a visiting Russian dignitary,” she recalls. “And yes, I spoke to him in Russian.” That’s how she ended up spending seven years in a post in Bucharest, Romania, since “I like reading Russian literature, like Dostoevsky—and I’m also interested in transition economies.”

Assigned for a time in Manila, in the office of American affairs, she was acting assistant secretary when Pres. Barack Obama first came to visit, “and it fell in my lap.” She went on to become an economic officer in Japan —where she also learned the language, of course—before being posted in Hawaii in July 2014.

While she focused on trade in Japan, she was surprised to find a huge, active, mostly Ilocano-speaking Filipino community in Hawaii. Although she had heard of sakada before, she quickly realized how the word was a huge part of the Filipino-Hawaiian experience.

“It’s a very powerful word, and one that has to be remembered, especially among new generations of Filipinos. We needed something to make them remember.”

Thus did she broach the idea of a Sakada Day to Speaker of the House of Representatives Joseph Souki on her very first courtesy call as consul general, and Souki patched her up with Vice Speaker John Mizuno, who threw his support behind the bill. “In fact, during my surprise welcome party, I was surprised to know that John already had a title for the bill!” Jamoralin says.

She enlisted the help of Dr. Belinda Aquino, professor of Political Science and Asian Studies at the University of Hawaii at Manoa, who helped craft the document. Jamoralin, a self-confessed policy nerd, also cleared the move with the Department of Foreign Affairs and the National Historical Institute back home, just for accuracy.

Thus, less than a year after she had assumed her post, Jamoralin saw the Sakada Day bill unanimously passed into law on April 9, 2015—and had soon won the goodwill of the Filipino community, who were delighted to have a dynamic go-getter as their “ConGen.”

“It was really a confluence of events,” says Jamoralin, a straightforward scholar who moves fast, speaks fast and laughs easily. “Even the Senate President was a Filipino, Donna Mercado Kim. It was a matter of timing, and I like to seize the moment.”

During the signing of the bill, for the first time, the capitol was full of Filipinos. “Many of their descendants were crying. Imagine, many sakada came here to work so hard. It was humbling to have both the House of Representatives and Senate recognize that.”

Of her work, Jamoralin admits that she didn’t expect to be so busy, “but maybe I created the situation,” she says with a laugh. “I especially saw the need for developing the next generation of Filipinos, many born and raised here. There are youth organizations, but many of them don’t speak Filipino, much less Ilocano.”

That was the impetus behind the Ilocano Language Acquisition and Immersion for the Next Generation (Ilaing), a program which graduated 20 students in 2014, five of them sent to Ilocos for intensive immersion. “‘Ilaing’ is actually an Ilocano word for wisdom. I told them, ‘You’ll stand out. It’s cool to learn Ilocano.’ How can you be a committed leader of the Filipino community in the future if you don’t speak the language?”

It’s a six-year term for Jamoralin in Hawaii, but she’s not losing sleep over her next post and her inevitable future as a career diplomat: an ambassador’s post. “Like we say in the foreign service, you have to bloom wherever you’re thrown, like a water lily.”