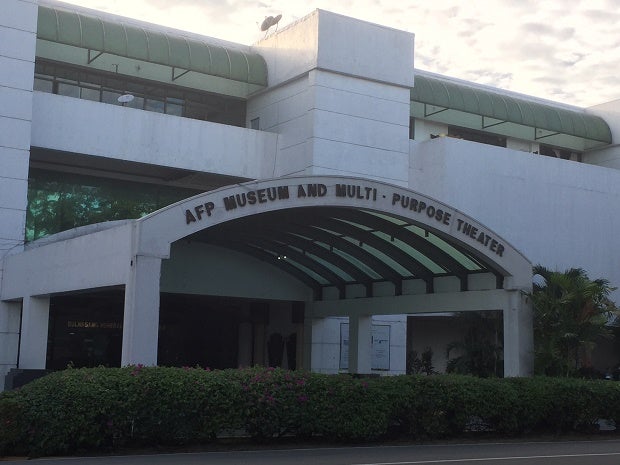 AFP museum in danger of losing electricity due to unpaid bills

The Armed Forces of the Philippines (AFP) threatens to cut off the electricity of its museum in Camp Aguinaldo, which houses priceless military artifacts, if its two years’ worth of bills won’t be paid this week.

Museum administrator Elizabeth Dapiton said in an interview on Monday that they received a notice of disconnection last week from the General Headquarters and Headquarters Service Command, warning them that electricity will be cut off if they won’t be able to settle their bill on Wednesday.

The museum has unpaid electricity bills worth P1.375 million since November 2013.

Dapiton explained that when the museum started its operations in 1996 during the time of AFP chief Gen. Arturo Enrile, there was a verbal agreement that the AFP will be subsidizing the utilities of the museum.

However, in November 2013, the AFP started billing the museum for electric consumption. During that time, the AFP implemented a ruling that all their concessionaires or tenants will pay for their own utilities.

The AFP museum, a non-stock and non-profit foundation, is considered a tenant at Camp Aguinaldo.

“The museum itself is a foundation. It’s under the AFP Museum and Historical Library Foundation, Inc., so it’s not directly under the AFP though it was established basically for the AFP. It’s not under its plantilla but their collection is being kept here,” Dapiton explained.

“So we are parang (like a) repository of the collections of the AFP, and in a way with their displays and exhibits here we are giving them a good image, we’re marketing them to the students,” she added.

As a non-profit organization, Dapiton said they have no means to pay the electricity, which is around P40,000 to P50,000 monthly.

The museum charges P20 and free to servicemen and veterans.

Income from the admission fees go to the five museum workers on minimum wage and purchase of other needs such as the replacement for busted lights.

“We are still grateful to the AFP because if they started billing us a long time ago, matagal na kaming nagsara (we would have closed long ago. We still owe that to them,” she said.

Some of the prized items on the two-story museum include a uniform worn by General Emilio Aguinaldo, the country’s first president. It also features handwritten letters of of Apolinario Mabini. Other items on display include military uniforms, photographs, historical documents and weapons used by the Philippine military since pre-colonial times.

The lack of electricity will place the historical pieces in danger of getting molds and fungi.

Around 10 years ago, the museum went without electricity for a year after its transformers got busted, placing its displays in danger of getting molds because of warmth.

“When the students come here, they want to join the AFP. Imagine the value for money there. It’s like a big recruitment center for the children and they don’t see it. I can cite so many positive things that the AFP gets from this set up and yet here we are,” historian and museum consultant Jose Custodio lamented.

Dapiton said they received the same notice of disconnection from the camp commander last year, however, it was held after they asked to give them more time to raise money.

“We told them na please give us ample to time raise a [sizeable amount] to pay you kasi wala talaga kaming pagkukunan (because we have no resource to pay for it…There was a verbal agreement that it will be deferred, but ito na naman ngayon (here it comes again),” she said.

On Feb. 11, a program honoring the victims of World War II will be held at the museum and those who will attend include Philippine Veterans Affairs Office Administrator Ernesto Carolina and AFP chief Gen. Hernando Iriberri.

Asked if the camp commander is aware of this activity, Dapiton said she earlier wrote a letter to the same office asking them to help in cleaning the park, where the event will be held.