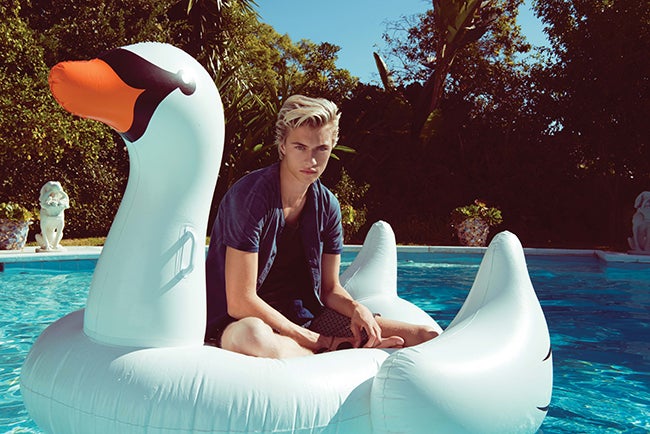 Behind the scenes at Lucky Blue Smith’s Penshoppe shoot

Penshoppe kicked off its spring/summer season with a splash, throwing a pool party at The Palace Pool Club on February 2 to unveil its newest collection and announce the brand’s latest endorser.

Lucky Blue Smith, the modeling world’s wunderkind and It-boy and the drummer of The Atomics, the band he started with his equally gorgeous siblings, is the new face of Penshoppe, joining the ranks of Sean O’Pry, Kendal Jenner and Sandara Park. Oh yes, #PenshoppeGotLucky.

Raised in Utah, Lucky was scouted when he was just 10 years old and signed with Next Models when he was 12. Today, he has two million followers on Instagram and legions of fans, called Lucky Charms, all over the world. Asked what he loves about the Lucky Charms, he said, “How supportive they are and just how nice they are. I can just go to them and I can just talk to them about anything and they’d give me their opinions and be honest and if I’m doing something stupid, they’ll tell me.”

Lucky really makes it a point to reach out to his fans, organizing spontaneous meet-ups in different cities.

When Inquirer Super asked Lucky why he said yes to Penshoppe, he said, “Have you ever seen their clothes? They’re amazing. It’s just fun working with them. And I didn’t know they were going to be so cool on set. It’s amazing. It’s just Penshoppe. You wouldn’t say no.”

Photographer Yu Tsai shot Lucky for the campaign at a beautiful home in Beverly Hills last November and Inquirer Super was there to witness the action.

“Let’s do this!” Lucky said with gusto, moving fluidly, playing with different poses, looking undeniably at ease in front of the camera. Between shots, he would break into an almost goofy grin, a big change from the smoldering looks he was giving the lens just seconds before.

Tall (he’s 6’ 2 1/2”) and lanky, Lucky would amble over to the computer, joining the small group that had gathered to look at his pictures. In person, Lucky looks like the genetically gifted 17-year-old kid that he is but in stills, with his trademark platinum-dyed hair slicked back and his intense blue eyes, he looks a lot more grown up. A real-life (way smarter) Zoolander. 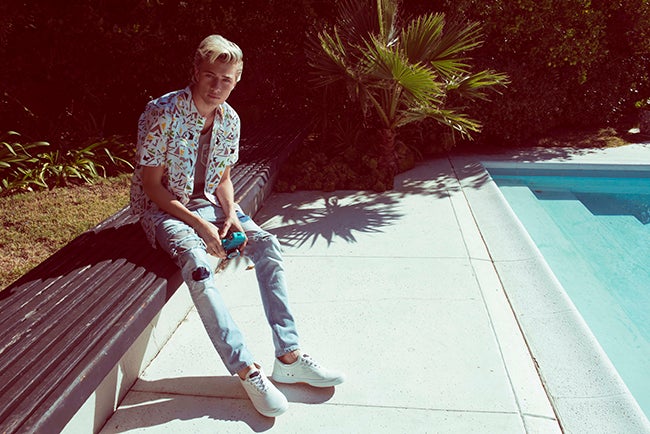 “This is my first time shooting Lucky Smith but I know his work really well. He has a really interesting and beautiful face. I always described shooting anyone as doing a dance for the very first time. Even if both of you may be experts at dancing, you may not have the same rhythm so it’s really, really important to find a rhythm between you and your subject. We connected immediately, he’s quirky, he’s funny. He was quick to adapt and he worked fast,” Yu Tsai said.

“I’ve always wanted to work with Yu Tsai. His body of work is just very impressive. I love working with this guy, the energy he brings to the set is just infectious. Everything fell into place, good weather, awesome team, and a great talent in Lucky,” Jeff said.

“What a trooper,” we overheard someone say at the shoot, commenting about how Lucky got into the swimming pool and posed on an inflatable swan despite it being a cold day.

Lucky said, “The shoot today was really cool. I had so much fun. So relaxing. I jumped in the pool, I ate pizza for a shot, like you couldn’t have had a better shoot.“

His favorite pieces from the shoot? “There’s this one look that I wore, gray denim jeans, gray shirt and this white jacket, that whole look was really nice and put together and you could pull some stuff from a different collection and it would probably still look really great.”

The clothes Lucky is wearing in the campaign is now in stores, with others scheduled to arrive later this month. ”“We put a twist on tropical patterns and retro-inspired looks with a nice play on prints and silhouettes, Summer should be fun and easy,” said Jeff. Lucky’s agent Mimi Yapor said, “I think Lucky Blue is a total throwback. He is like a vintage old-school celebrity in the sense that he loves his fans, he spends time with them and he’s kind of just a classic guy. He’s elegant but he’s young and he has good manners and it’s refreshing. I think people aren’t used to that anymore.”

“Lucky is just so chill and fun to work with.  He exudes a very laidback persona. I liked the energy on the set, we were all on the same page,” said Jeff.

And does Lucky’s Penshoppe campaign mean his Filipino fans might get to see him in the Philippines? “I guess you’ll find out,” Lucky said, grinning.

For a bigger dose of Penshoppe X Lucky Blue Smith and for our full interview with him , pick up a copy of Inquirer Super on Friday, February 5.