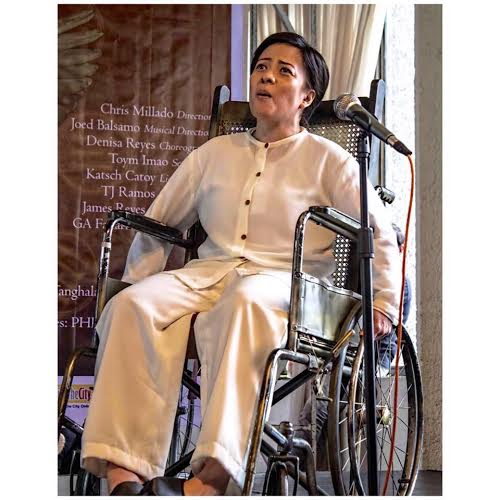 A-list actress, Gawad Buhay! awardee and Repertory Philippines alumna Liesl Batucan is the new Apolinario Mabini, the intellectual leader of the 1896 Philippine Revolution against Spain and the Philippine-American War, in the restaging of the Tanghalang Pilipino hit musical “Mabining Mandirigma.”

She is the second woman to portray the role, replacing the much-admired Delphine Buencamino, who shone in the original production which was first staged in July last year.

The restaging runs Feb. 19-March 13 at the Tanghalang Aurelio V. Tolentino (Little Theater) of the Cultural Center of the Philippines.

“Mabining Mandirigma” is by playwright Nicanor G. Tiongson and composer Jed Balsamo. The director is Chris Millado, with choreography by Denisa Reyes.

Millado said feedback from the audience last year made Tanghalang Pilipino opt for a return engagement early this year. “Unfortunately, Delphine (Buencamino) could not make it this time,” he said. “As you all know, there was a family tragedy last year and it was very difficult for her, but she performed with much finesse. We are building on that role, with Liesl this time.”

Another new member of the cast is David Ezra, who will alternate with tenor Arman Ferrer as Emilio Aguinaldo. “He is the son of Dulce,” the director said, “so you can see were he got the power of his pipes. At the same time, he is his own persona.”

Why a woman (again) as Mabini?

The director said the show has been made tighter, with some revised lyrics and changes in choreography whenever Reyes has an epiphany. “The cast is always on their toes,” observed Millado. Sometimes the changes may occur “just before the show,” as one actor quipped.

“It’s such an honor to play a national hero,” said Batucan. “It’s a work in progress and I’m nervous, but practice makes perfect. It’s an exciting part. Also, the writing, the music are superb.”

The musical begins in 1898 with Mabini already serving as Aguinaldo’s adviser and Cabinet president, and traces his conflict-ridden career marked by opposition to compromisers like Felipe Buencamino and Pedro Paterno, his fall from grace and break with the naïve Aguinaldo, exile to Guam and return to the country with principles intact. Mabini died of cholera just three months after he came back to his native land, at 38.

“Our heroes were very young,” said Millado. “Mabini was in his 30s then and Aguinaldo in his late 20s. So, with this play, we should move on and fulfill the ideals of these young revolutionaries.”