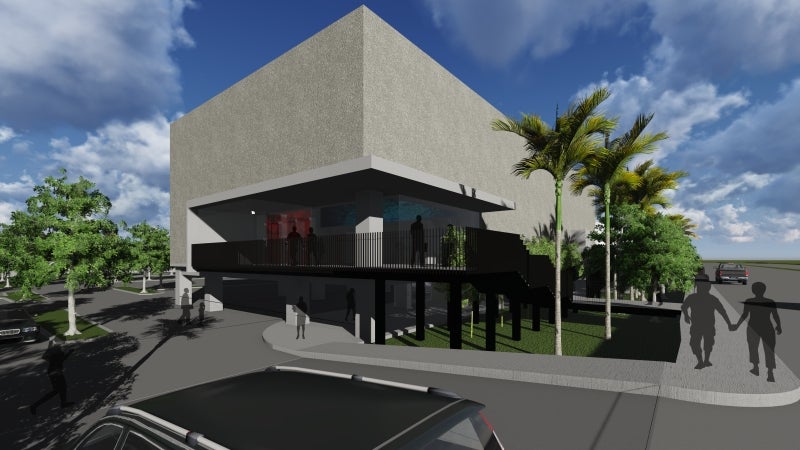 Artist's rendition of the new Black Box Theater, which will rise on the Sunken Garden of the CCP grounds. ALL PHOTOS FROM THE CULTURAL CENTER OF THE PHILIPPINES

The Cultural Center of the Philippines broke ground for its first construction project in three decades, the CCP Black Box Theater, on Jan. 19.

“Today, against all odds, we are doing it,” said CCP Chair Emily A. Abrera before guests, right on the spot at the CCP Sunken Garden where the building will rise. “Today, after years of frustration, unmet expectations, litigations and a lot of other issues, we celebrate the victory of like minds working together to defeat the odds.”

“Today,” she added, “we will dig a hole, we will plant a dream, and we know because of your daily determination, that dream will flourish and grow, and one day we will see the completion of what we had planned 12 years ago.”

It took that many years for the CCP management to green-light its first project under the CCP Complex Development Plan, a plan that aims to see CCP’s property—71 percent of the whole CCP Complex—flourishing as a hub of both the arts and business.

“You know, it’s very hard to be in government, there are so many things you cannot do and budget is always inadequate,” Abrera admitted. “Masalimuot; we fight for every centavo that we could get, and we really manage to make it by the skin of our teeth every year.”

The funding issue forced the CCP to entertain the idea of a public-private partnership, but possible deals fell through twice, recalled CCP vice president and artistic director Chris Millado.

“One developer backed out after a government corruption scandal broke out, another was good but we thought there might be no returns for the center because of the arrangements.”

But this time, the new building is underway because businessman and theater arts patron Ignacio Gimenez—in his college years a member of the UP Dramatic Club and UP Mobile Theater under the late National Artist Wilfrido Ma. Guerrero—pledged to fund the construction costs.

The CCP Black Box Theater is estimated to cost some P50 million, and to open in eight to 12 months.

Property issues also delayed the execution of the master plan, said Andy Locsin of Leandro V. Locsin Partners (LVLP), which in June 2011, won a contest to design the developments for CCP. The CCP Complex is the arts and entertainment section of the reclaimed Boulevard 2000, with some areas owned by other government agencies.

The design, Locsin explained, should make the building look finished but ready for integration with the bigger building, which will cover the Sunken Parking from edge to edge. The theater should also conform with the overall aesthetic of the CCP and be built sustainably.

Millado said it will be three to four times bigger than Tanghalang Huseng Batute, CCP’s current black box theater. Unlike Batute, where artists waiting to go onstage have to wait in the comfort rooms, this one will have a “real backstage” with a dressing room, an equipment area, a lobby, a space downstairs for parking, and a café.

While the multibillion plan lies in wait, the CCP Black Box Theater will, true to the nature of a black box theater, be a flexible performance space for many productions, like plays, chamber operas, cabaret performances, recitals, even classes.

It can help “decongest the booking traffic of our theaters, because right now we are having some problems. Many people would like to book our theaters but we don’t have the available venues,” said Raul M. Sunico, CCP president.

Sunico also sees the new theater as the resurrection of the former Metropolitan Theater’s DalubDulaan, which hosted experimental works in the performing arts.

“We see this place as a living space for developing new works, original Filipino works,” agreed Millado. “It will be unapologetically experimental, and forward-looking in its choices. It might have unlikely engagements in between artists, and it might open new ways of engaging with audiences.”

The undertaking will hopefully help the CCP recover its spot as the undisputed “hub for creative and cultural expression for the country, down to the regions,” Millado said. And it is but one step closer to a grander goal—for the Philippines to be Asia’s platform for innovation in the arts. 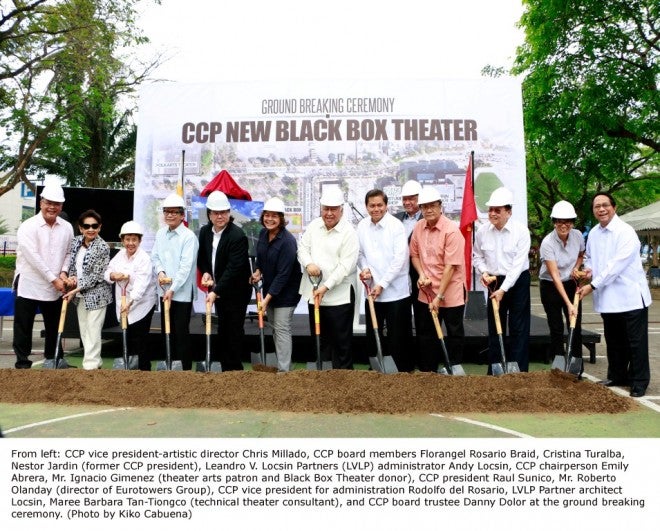 But it’s still a long journey for the development plan, let alone the theater, noted Millado.

So far, no one has come forward to fund the equipment and facilities of the CCP Black Box Theater. “It’s just a box without chairs, lighting, sound, interiors,” he pointed out.

The Gimenez donation should send an important message to all stalwarts of the arts, he said. “I hope there are more individuals who could share their resources and wealth for arts in the Philippines. Can you imagine if you are able to contribute to the development of more spaces for the kind of creative content that we have?”

Millado added: “People say that [you] just give floor boards and the passion and that’s all what artists need; kailangan lang daw ay papag at pagnanais na magkuwento at tama na ’yon sa mga artists…. Can you imagine what will happen if we give our artists a Black Box?”