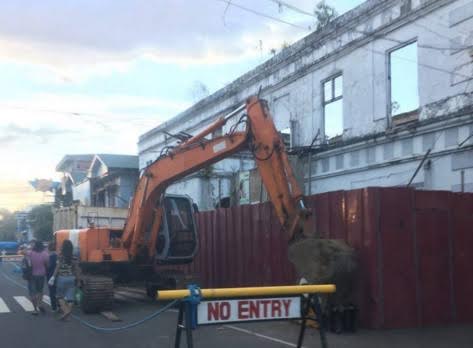 FROM golden building to Puregold. Heavy machine empties old Iriga City Hall, so that only the façade of the structure remains. PHOTO COURTESY OF ALLAN REIZ MACARAIG

THE OLD Iriga City Hall in Camarines Sur, a presumed important cultural property (ICP) because of its age under the National Heritage Law, and a national government-marked structure, has now been demolished to give way to a mall.

Only the façade remains of the American-era heritage building, which was ironically being promoted by the local government as one of the city’s historical sites.

The façade, local officials said, will be incorporated into a Puregold branch that will be constructed in its place after a lease of agreement was signed by the city government led by Mayor Ronald Felix Alfelor with Bellagio Holdings Inc. last September.

On Feb. 2, the National Historical Commission of the Philippines (NHCP) acted on the petition by four barangay captains to halt the demolition and issued a cease-and-desist order (CDO) and recommended the building’s preservation and integration into the new structure.

The letter to Alfelor asked the local government to submit a development plan for the review and recommendation of the commission.

“While we review your plan, no alteration, modification or demolition of the structure is to be undertaken,” read part of the CDO.

However, the demolition continued after Alfelor did not honor the CDO, said Allan Reiz C. Macaraig, legal counsel of the four barangay captains.

“You are directed to immediately detail personnel to secure the area and completely prevent any further acts of demolition, including the removal of structural components and debris, by any party without the prior written [approval] of this Commission,” read part of the order, adding that any acts against an “important cultural property” was in violation of the law.

“All parties, including the City Government of Iriga and its officials, and Bellagio Holdings Inc., are expected to comply with the CDO, which remains in effect until lifted in writing by this Commission. Accordingly, all parties are reminded, including such agencies and offices as we may deputize: Fail not, under penalty of law,” the NHCP said.

“Having had a good experience with Puregold in 2009 when they heeded the call of the community of Laoag, Ilocos Norte, to preserve the Laoag Central Elementary School,” said Henares, “we are hopeful that they (Puregold) will do the same in Iriga City, now that they know that the historic city hall is a heritage building, and important to the community as well,” he told the Inquirer before the fast-paced demolition of the structure which was marked by the then National Historical Commission sometime in the 1960s.

“It is so ironic that Iriga City Hall and Barit Bridge are featured as historical attractions on the local-government website,” said Henares. “Barit Bridge almost got demolished because of a DPWH road-widening project [last year].”

A CDO by the National Commission for Culture and the Arts (NCCA) late last year prevented the demolition of the bridge.

It was declared an ICP by the National Museum, together with other sites and structures, last December 2015.

Alfelor was quoted in the local press as saying only the façade would be saved as in other heritage structures in the country where only that part was retained in the course of redevelopment.

“The mayor is obviously misinformed,” said Henares. “Retaining the façade is tantamount to demolishing the building. The building must be preserved in its entirety. No part should be demolished.”

He said the local government should have secured a permit from the NCCA (or a pertinent cultural agency) before any portion of the structure would be touched, adding the local chief executive could be charged for violation of the heritage law.

“A compulsory repair order can also be issued. The mayor will have to reconstruct what he demolished at his expense,” he explained.

“They (city halls) are monuments of a town’s history and urban development. Also, the question of complementary adaptive reuse can be looked into. Institutional is not complementary to commercial use,” Henares said, quoting Mata.