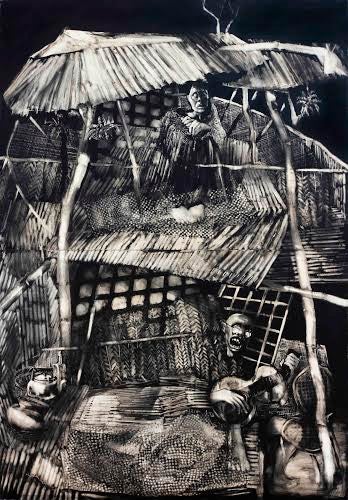 ‘THE APARTMENT,’ by Onib Olmedo

“THE APARTMENT,” the iconic Onib Olmedo painting generally regarded by critics as one of the late artist’s masterpieces, is the main attraction at the Leon Gallery auction on Feb. 20.

The painting measures 5.2 ft in height and 3.54 ft. in width. The medium used is ink wash, where the artist poured ink on the surface of a piece of glossy cartolina paper and then, against this black background, used swabs of cotton to etch out the image or design of the painting.

The painting won an Honorable Mention award at the prestigious “International Exposition de Paintres” at Chateau Musee de Cagnes-sur-Mer in France in June 1992. Olmedo was the very first Filipino artist to be accorded such a distinction.

The title “The Apartment” carries a connotation of irony and pathos. This term is used to describe concrete two-story structures, usually built in rows, sometimes with as many as 10 adjoining houses with uniform architectural designs and even colors, and rented out to middle-class couples who still don’t have the means to build their own single-detached houses.

This was in vogue in the ’50s until the early ’90s, before the advent of more chic dwelling places known as townhouses and high-rise condominiums. Olmedo’s “Apartment” is a far cry from these solid, concrete structures.

The painting is divided into two sections. On the upper level, there is a woman hunched over, seated on bamboo flooring, clutching his rosary beads, totally absorbed in prayer. On the lower level is a bespectacled man with a “skin-and-bones” figure and an emaciated face that looks almost like a skull, playing the guitar and singing his heart out. On the foreground, right on the floor, are pots and pans, suggesting that the couple utilizes a very small, cramped space for all their activities.

In a nutshell, the painting is an affirmation of the two major elements of the Filipinos’ support system: Prayer, manifesting their profound belief in a Supreme Being who, they are convinced, will always take care of them, in the midst of all the hardships and struggles brought on by poverty; and music, which has a way of soothing the mind and uplifting the spirit in the most tumultuous situations,

“The Apartment” is an artistic statement on the social problems plaguing Philippine society. Filipinos living below poverty line have no basic necessities of life that would give them the dignity they deserve as human persons. And yet, paradoxically, studies have shown that Filipinos are among the happiest people in the world. The painting explores the reason behind this phenomenon: the Filipino can always rely on his faith and his music to alleviate the suffering brought on by poverty and oppression.

Olmedo (1937-1996) has been acclaimed by critics as a major Filipino artist of the 20th century. He created a body of works that utilizes the expressionist technique of distortion to portray the inner torment experienced by modern man.

The subjects of his paintings were the denizens of Sampaloc and Ermita, including musicians, prostitutes, vendors and waiters, as well as people from the upper strata like society matrons, corporate executives and ballerinas.

Olmedo died in 1996 when he was only 59 years old. His impact in the art scene continues to be felt to this day, as evidenced by a whole new generation of artists whose works are influenced by Olmedo’s style.