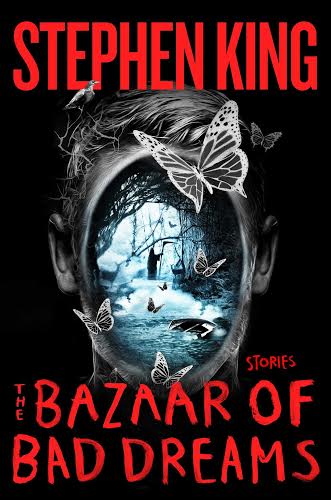 THE COVER of "The Bazaar of Bad Dreams"

IF THERE’S anything better —and more terrifying—than a little Stephen King, it’s a lot of Stephen King. The master horror writer has scared generations of readers through his novels through the years—now he’s ready to scare you even more by offering up 20 short stories in his new, aptly named collection “The Bazaar of Bad Dreams: Stories” (Scribner, New York, 2015, 495 pages).

While better known for his novels (and the various film and TV adaptations made from them), King has a soft spot for short fiction. “Bazaar” is King’s 11th collection if you count back from his first, 1978’s “Night Shift.” It’s his latest since 2010’s “Full Dark, No Stars.” King has written over 100 short stories and novellas, including the pieces that eventually became films such as “Apt Pupil” and “The Shawshank Redemption.”

Of short stories, King says: “Writing them makes me happy,” and “there’s something to be said for a shorter, more intense experience. It can be invigorating, sometimes even shocking.”

King relishes using the image contained in the book’s title, acting as the mysterious seller offering stories for sale in a bazaar, “Some of these items are dangerous. They are the ones with bad dreams hidden inside.”

In a way, King’s stories are, indeed, better than his novels because they remain extremely well-crafted in that precise, polished King fashion, the twist comes sooner and much stronger in a piece of short fiction.

The 20 stories here are not all frightening, but are mysterious and keep you guessing. “Drunken Fireworks,” for example,” is not scary at all—it’s hilarious instead—and is about exactly what you think it is. Two of the pieces are actually told in verse.

Some of the stories are suspenseful but have no supernatural elements at all. “Batman and Robin Have an Altercation” is ostensibly a father-and-son tale. “A Death” is a Western whodunit. “Herman Wouk is Still Alive” is the backstory to a horrific car crash. “Under The Weather” is a psychological fable about domestic life, just as “Blockade Billy” is one about old-time baseball. The best of these is the enthralling “Morality,” which shows what happens when a husband and wife who need money meets a wealthy man with an unhealthy obsession, kind of a really “Indecent Proposal.”

Aside from “Morality,” the best, scariest pieces in “Bazaar” are those with an otherworldly element. “Afterlife” is King’s unsettling yet reflective take on what happens after you die. “Ur” is a real oddity, a story made especially to feature Amazon’s e-reader the Kindle, except this one connects to other parallel realities.

“Summer Thunder” is an intimate post-apocalyptic slice of life. “The Dune” is a slow-burning narrative with a great ending. It shares a theme with the angel-of-death story “Mister Yummy.”

Then there are the brilliantly terrifying stories. “Obits” is classic King, about a man who discovers he can kill people simply by writing their obituaries. It’s a media-fueled meditation of what happens when you find you have the power to do terrible things to both bad and good people.

“Mile 81” is another car-themed King tale, about a thing that disguises itself as an abandoned car and—kid you not —literally eats the people who chance upon it.

The single best offering from “Bazaar” is “Bad Little Kid.” At first, this story doesn’t seem all that scary as it features a pudgy boy who seems to be stalking the narrator. But when the boy keeps appearing without aging through the years and seems to be perpetrating one death after another, the narrator and the reader feel the desperation and the terror. Warning: This will give you the bad dreams King warned you about.

Aside from the expected superior stories, “Bazaar” also features short introductions for each piece from King himself. The intros add texture and purpose to the stories. All these are the reasons why “The Bazaar of Bad Dreams” offers the intense, invigorating reading experience King offered, 20 times over.

“Everything you see is handcrafted, and while I love each and every item, I’m happy to sell them, because I made them especially for you,” Stephen King says. “Feel free to examine them, but please be careful. The best of them have teeth.” It’s the best—and scariest—deal you’ll get all year.