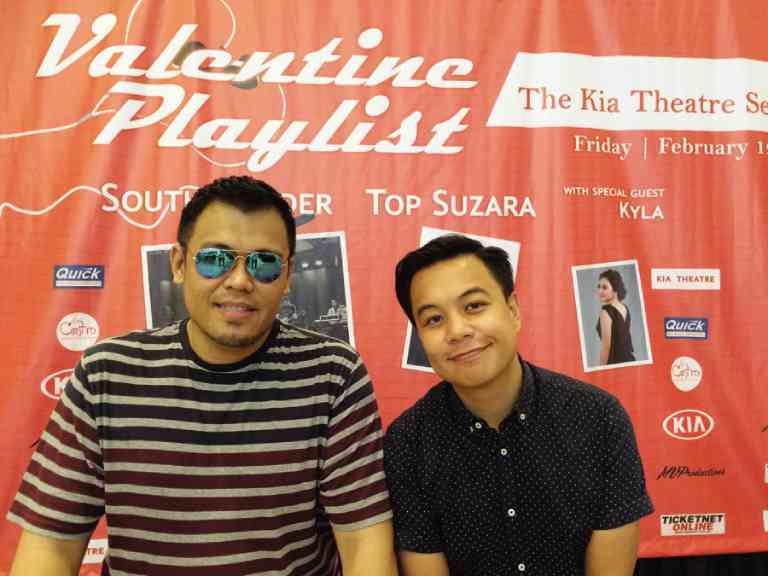 The nightlife choices this Valentine’s Day are varied and not overlapping—since Feb. 14 falls on a Sunday and there are shows also scheduled on Friday and Saturday (Feb. 12 and 13).

Here are five suggestions on where to spend the occasion, based on three factors: convenience of location; dining options; and, of course, the quality of the Valentine show.

For residents of Quezon City and its vicinities, the Araneta Center in Cubao has three big-venue concerts:

South Border’s Jay Durias, who is also the show’s musical director, is known for his refreshing rearrangements of practically any song. Pressed to give the audience an idea of what to expect, he says he will turn something very senti like Barry Manilow’s “One of These Days” into an insightful tune about the nature of love and its complications.

The new Kia Theatre is the former New Frontier Cinema that has been renovated as a multipurpose hall, especially for concerts. It looks magnificent inside, the stage and seats resembling the CCP.

The Gateway Mall nearby has lots of restaurants if you want to have an early dinner.

This show is an annual repeat of the long-running reunion gigs of the two groups. Recommended for those who have yet to watch its earlier editions, although the repertoire may have been revised to keep old fans interested.

It’s a wonder why Ali Sotto (the former pop singer named Aloha) is in the artists’ roster, since she was never a member of either groups, though it seems she will take the place of Joey Albert (New Minstrels), who is doing another show.

Highly recommended for those who want to have a good laugh all night. This is the debut outing in a major venue for Papa Jack, the country’s most popular radio DJ, and the Chuchay-Boobsie tandem, said to be the female counterpart of Jose and Wally.

Kia Theatre and Smart Araneta Coliseum, tel. no. 9115555; log on to ticketnet.com.ph

These options are for those who prefer an intimate setting with a band playing onstage.

The food is consistently tasty, from appetizers (crispy tenga, gambas, salpicao) to full meals (tenderloin steak, grilled salmon) to pastas and pizzas. There’s also a good selection of red and white wines. Featured band on Feb. 13 is Silk, composed of three female vocalists, plus DJ Bad Boy, one of the best club DJs in town.

Don’t mind the distance because this is perhaps the only place you should be on Feb. 14.

Start with dinner at Kiwa Korean Grill Dining, one of Solaire’s newly opened restaurants. A full-course menu consists of appetizers, salad, sashimi, beef ribs and pork belly, glass noodles and dessert. The staff will do the grilling of the main course on your table, but your clothes won’t smell of smoke due to Kiwa’s top-of-the-line exhaust system.

And then proceed to the Solaire Theatre for “Celebrate Love” featuring Dennis Lambert and Joey Albert—an idea that started years ago when Albert produced a Lambert gig in Vancouver, where she’s based. Now she’s writing, directing and singing with Lambert for their Solaire show.

Lambert recorded the ’70s pop gems “Ashes To Ashes” and “Of All the Things,” not to mention being the co-writer/co-producer of Glen Campbell’s “Rhinestone Cowboy,” The Four Tops’ “Ain’t No Woman (Like the One I’ve Got),” Player’s “Baby Come Back,” and the Commodores’ “Night Shift,” among  dozens of other classic pop hits.