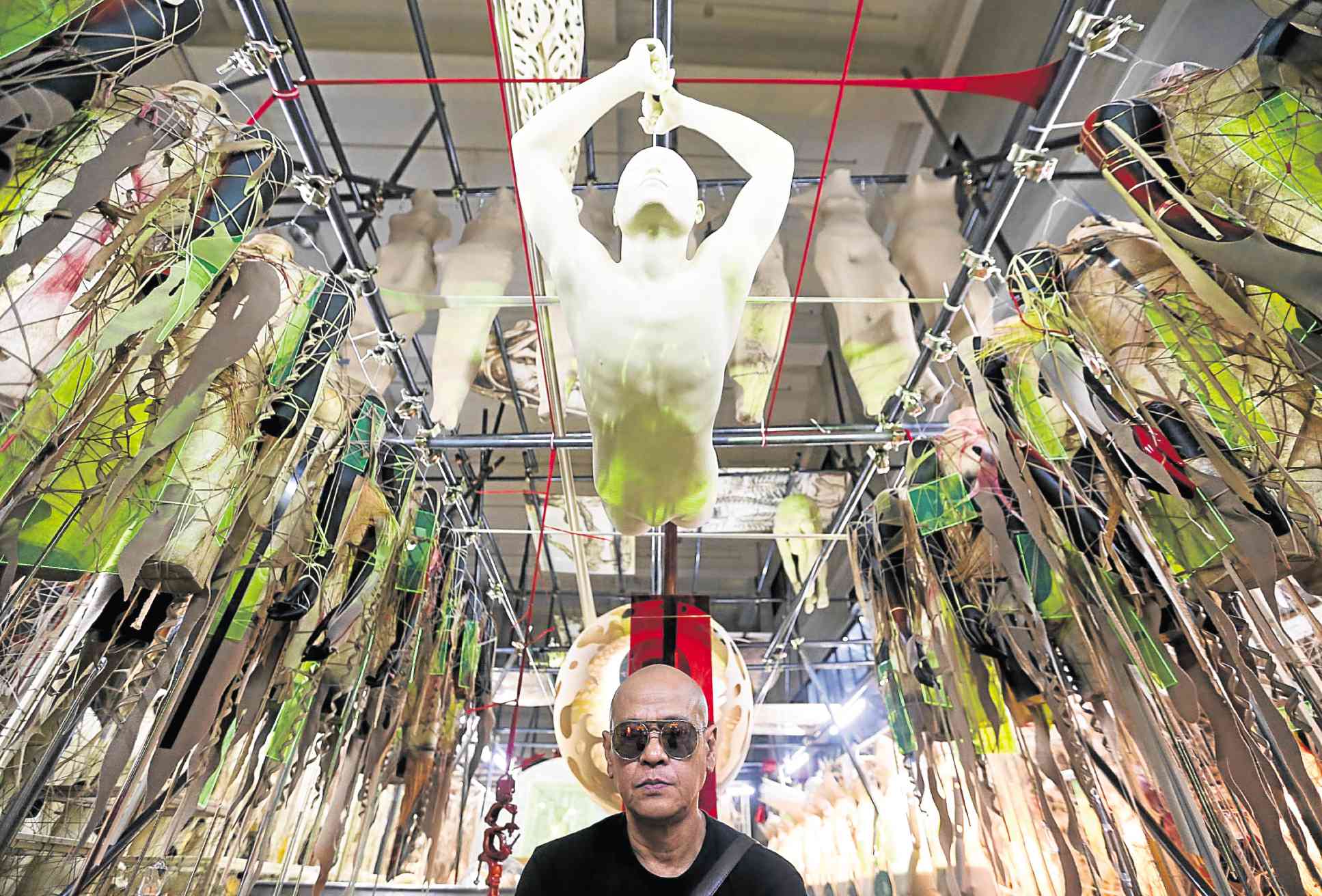 “I ALWAYS do the opposite of what people expect,” says Barredo. LYNRILLON

In the Spike Jonze film “Being John Malkovich,” John Cusack plays a file clerk who discovers a secret doorway into the head of the actor John Malkovich. For 15 minutes he is able to witness what Malkovich sees and experiences. Then he is ejected back into his own humdrum reality.

I feel not unlike the John Cusack character as I enter the dark, satanic mills (actually, the production design annex of the Cultural Center of the Philippines) where sculptor Gabriel Barredo has been hard at work for weeks creating the massive installation for “Opera,” his collaboration with Ballet Philippines, which will premiere at the CCP’s Tanghalang Nicanor Abelardo (Main Theater) on Feb. 13.

Walking into the dark, hangar-like structure is like entering Barredo’s headspace, a systematic derangement of the senses that, for a few disorienting moments, throws you into a separate reality.

The feeling is also similar to what I imagine taking a heavy-duty psychedelic drug—DMT, perhaps—would be like.

Godspeed You! Black Emperor’s avant-rock is blasting through the loudspeakers, and the only illumination in the room emanates from within scores of eviscerated human torsos whose heads have been replaced with steel mesh constructions, crocodile skulls, and half-masks while their guts spill open. (These, I later learn, were once Bench mannequins, repurposed by the artist—destroyed, so they could live again.)

Elsewhere is more evidence of the artist’s obsession with the body and its vivisection, anthropomorphic figures laid bare to reveal organs, membranes, capillaries and connective tissue.

On a wall is a row of human fetuses in various stages of gestation from embryo to breech birth; on another is a representation of hundreds of human eyeballs.

This recreation of the human machine evokes an appropriately visceral response from the viewer, an admixture of fascination and dread, wonder and paranoia, among other, more amorphous feelings.

“It’s not a set design,” says Barredo.  “This is something new. I call it an installation. We’re looking at it as a piece of art through which you can enter my head, literally. You are lost in my thoughts and experiencing them for yourself. I’m trying to get as close as possible so that you will experience that.”

The reclusive Barredo is notoriously press-shy, and has been known to skip his own exhibit openings.

Most of all, he loathes having to explain his art. He prefers to let the work speak for itself. But “Opera” is obviously an exception.

“I’m not doing this to shock,” he adds. “I’m not doing this to be different. It’s really what I see in my head. That’s all I’m doing—documenting it and making it happen. It may be kind of morbid and strange, but people are affected—in a good way. This is something they don’t normally see.”

“Opera” is Ballet Philippines’ season finale, but it sure ain’t “Swan Lake.” It’s the kind of art/performance piece that the CCP hasn’t seen since the heyday of avant-garde experimentalism in the 1970s.

In a way, “Opera” is the logical outcome of the evolution of Barredo’s work over the past three decades.

He first planned to do a ballet/installation nearly 25 years ago, and had begun talks with the CCP, but the plans never gelled, until last year, when things started falling into place.

It began with Barredo’s installation “Opera” at the Silverlens Galleries last year, which later toured Singapore’s National Gallery to much critical acclaim. Audiences were, in Barredo’s words, “blown away” by the exhibit.

Although the current project is an entirely new work, it is an expansion and evolution of themes and images presented in the first “Opera,” with the addition of music and ballet giving the title its dual meaning: “opera” in the sense of musical theater as well as being the vernacular for “surgery.”

It was the entry of acclaimed French choreographer Redha that sealed the deal. Meeting him, says Barredo, was like finding a long-lost twin.

“My mom passed away two years ago,” says Barredo. “I think she sent [Redha] to me because she knew it was always my ambition to do this. The minute he walked into my space and started talking, it was like listening to myself.  We’re on the same wavelength.  And there’s no ego involved. Zero.”

Barredo’s affinity for music, dance and performance is inbred: Prima ballerina Maniya is his sister, Repertory Philippines’ Baby is his aunt, and Lea Salonga is a first cousin.

As a child, Barredo was already drawn to the dance, among other forms of self-expression.

Instead, Barredo taught himself sculpture, and started attracting attention in the late ’70s when he won several prestigious art competitions.

He has since become a leading figure in kinetic sculpture and installation art, with each project seeming to become more ambitious than the last.

Barredo has done a 30-ft-high installation with over 18 pieces called “Asphalt,” which was a highlight of the 2013 Art Fair.

But the current project dwarfs everything that has come before. With the pieces mounted on scaffolding that encompasses the stage, Barredo has designed “Opera” to be a totally immersive experience for the audience, spilling over from the main stage and into the theater itself, with kinetic sculptures, video mapping projections, and the dancers themselves becoming part of the installation.

At the end of the ballet, the dancers will lead the audience onto the stage to experience the installation at close range.

Although he scorns the cliché stereotype of the angst-ridden artist, Barredo admits that his process is an intensely personal journey that takes an emotional and physical toll.

“I’ve gone through sh-t in my life,” he says. “It’s a constant struggle. I’m still struggling in my life. Emotionally. And in the way I see things. Maybe it’s because I’ve gotten older, but everything around me seems to be dying, and we’re just shells. And yet, it’s a beautiful life.”

It’s this tension between death and beauty that fuels Barredo’s creative engine. His art is his way of pushing back the darkness that threatens to engulf him.

But the process of creation itself also seems to consume him.

Sometimes, he confesses, he just wants to bang his head on the cement floor, or to let out a primal scream.

He always has a case of beer on hand when he works because, at the end of a long day, he needs a drink or two to decompress and unwind.

“I always do the opposite of what people expect,” he says. “I always have to break the rules. At the end of every show, I kind of break down, kasi pinapasok ko talaga ang sarili ko sa ginagawa ko.

“You’ve got to lose it,” he points out. “I have my moments—my meltdowns.  I’m only human, I can only do so much, so at that breaking point, atras muna.  But if I have to die doing it, it’s worth dying for.”

The only time he seems to be comfortable in his own skin is when he’s working.

“In fact, to me what’s more important is the process rather than the finished piece, because that’s when the magic happens—at that very moment,” he says.

“When it ends, it’s gone,” he adds. “But it’s sucked everything out of you by that time.”