Why this cyclist will not move aside | Inquirer Lifestyle ❮ ❯ 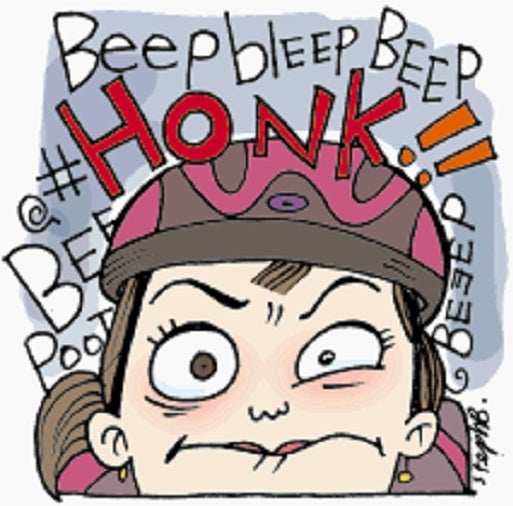 Why this cyclist will not move aside

(An open letter to the woman in the silver-blue Ford, license starting with PQX)

I will not move aside.

Biking along Paseo de Roxas on a Wednesday, Jan. 27, I was confronted by a car.

The driver trailed close behind me, nipping at my wheel. Angry beeps followed, sharp blows of the horn that shook my nerves. I was in the middle of the road, and the car was trying to force me to the side.

This display of entitlement is not new. Every biker experiences bullying from trucks, cars, tricycles, motorcycles, buses, jeepneys. It’s this aggression that contributes to the death of two cyclists each day. I stood my ground.

Not finding an opportunity to overtake me, the driver switched lanes, and then sharply sped in front of me, still honking furiously, only to stop seconds later at the light.

I was not proud of this moment, but as I passed the stationary car, I put my middle finger on her window to let her know she was being a terror. Why ride so close behind me when we are all going to the same light? Why overtake me, and put the other motorists at risk, when it saves you no time? Do you know how loud your horn is?!

As we worked our way through the intersection, she screamed “F-ck you!” accompanied by a slur of honks. At the next stop, I rolled passed the open window to confront her.

She asked: “Why the f-ck are you giving me like this [motion of flashing the middle finger]?”

I told her it was because she was beeping excessively, riding my wheel, and overtaking me unnecessarily.

“I’m trying to tell you to move over! Why the f-ck are you on the road?! You should be at the side!”

I was trying to explain why, but she continued with insults, screaming “F-ck you! F-ck yoooouuu!” as she rolled up the window and sped into a sharp left turn.

I would like to make clear to all drivers why I will not move aside.

Vehicles will take any space they can get. When I bike on or close to the edge of any lane, it makes cars think they have enough space to pass me. However, most lanes are not wide enough, and many times cars come so close to me that the side mirrors graze my arm.

The alternative is to move over into oncoming traffic or into the gutter. Biking on the right side of the street also makes me vulnerable to car doors or jeepneys that pull over suddenly.

I would understand this driver’s annoyance if there were designated bike lanes I chose not to use.  There are none in Makati.

I would understand her frustration if it were illegal for bicycles to be on road; it’s not.

I would also understand her heavy beeping if it were a major roadway with fast-moving traffic, such as Commonwealth or Edsa, and she was concerned for my safety.

But her actions are a form of discrimination, and in other cities around the world, such behavior has consequences.

In 26 cities and the District of Columbia in the US, which require cars to keep a three-foot distance from bicycles and reduce speeds to 15 mph when passing, the woman in the Ford could have been fined $35 (P1,650) for her close tailing.

Her aggressive beeping would be considered harassment if we were in Columbia, Missouri.

That’s why, in 2015, the council in the City of Columbia unanimously passed an ordinance that made harassment of bicyclists, including shouting threats and honking to frighten a cyclist, a Class “A” misdemeanor, for which one pays a $1,000 fine or gets sentenced to a year in jail.

There are no such laws in the Philippines.

There must be consequences for road aggressors, but it’s better to prevent a violation in the first place. Street designs should provide equal, safe access for vulnerable users, rather than allow bullying by the most powerful.

Traffic calming measures such as speed bumps, curb extensions, and narrower lane width encourage responsible driving, helping to reduce speeds and make drivers more aware of others on the road.

Protected bicycle lanes allow cyclists to bike at their own speed without interfering with vehicular traffic.

I regret my rude reaction to the woman in the silver-blue Ford. But I will not apologize for claiming my space on the road.

In fact, we, myself and the tens of thousands of bikers in Metro Manila, are the solution. One day we will be the majority. So, driver in the Ford, let’s share the road with more respect for each other. And when you get sick of driving your car—the gas bills, maintenance fees, parking rates/lack of parking, traffic jams, stressful road rage—I will find you a silver-blue bike.