Vivian Yuchengco: I glow because I don’t have a lover | Lifestyle.INQ ❮ ❯ 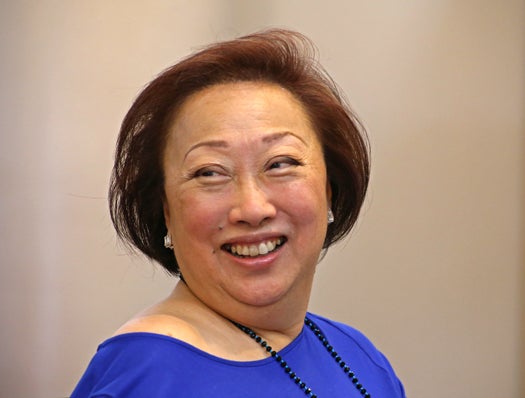 YUCHENGCO: “The Dragon Lady stands for a magical life, so it’s notnbad to be called the Dragon Lady." PHOTOS: KIMBERLY DELA CRUZ

Vivian Yuchengco: I glow because I don’t have a lover

The secret to aging well, even beyond your 60s, is to remain single and unattached, according to one of the country’s most powerful women.

“I glow because I don’t have a lover. If I had a lover I would be miserable, because you have to serve him. No matter what they say, women will always serve! So now, it’s just me having money and having fun,” said the feisty Vivian Yuchengco, laughing.

For the most part of her life, she has been going to a salon for her hair and makeup. Even now, she has not learned how to apply her own makeup. But the seasoned stockbroker has never actually tried running one.

The idea of opening a salon was first pitched to her by Teresita Sy-Coson, vice chair of SM Investments. At that time, Coson was putting up Sunshine Place, a recreation center for seniors on Jupiter Street in Makati City.

“She said at least daw I’ll stop shopping na. She wants me to stop shopping because I’m a shopaholic. Every day I shop. If I do the salon project I have somewhere else to go na,” Yuchengco said.

Not one to shy away from challenge, Yuchengco pursued the idea. It’s feasible, she thought, and with her vast experience as a salon regular, she knew which aspects of the service needed improvement, or which ones were not yet met.

Last August, while walking the streets of London sans makeup—she knows only how to do her eyebrows and wear lipstick, and compensates for the no-makeup look by wearing large designer sunnies—she came across the word Vivify.

“I told my lawyer right away, ‘Remember that name. That’s what my salon will be called. So when they come out of my salon, they will be vivified,’” Yuchengco said.

Yuchengco opened Vivify last October not really for herself, but to help set up her longtime colorist, Josie Gacutan, now Vivify’s senior stylist, and business partner Ana Asis, who manages the salon.

Like any hard-nosed businessperson, Yuchengco already has a timetable to implement her big plans for Vivify.

“My dream for Ana and Josie, since I’m old and they’re young, is for them to develop this salon, learn how to make money,  then they can have a training school, open branches, then have it listed in the stock market,” Yuchengco said.

RELATED STORY: Why seniors are flocking to sunshine place

Despite such ambitions, Yuchengco appears calm and unfazed by the tasks ahead.

“Naku, this is just like a game for her. She’s like my mom. Anything she wants me to do, I just do. Before this, she trained me in the stock exchange,” Asis said.

Since it opened late last year, Vivify has been one of the favorite hangouts of many seniors who are members of the Sunshine Place.

Yuchengco, herself turning 65 this year, knows exactly what the seniors need. With Asis, she brought treatments exclusive to Vivify, some of them tailored to the needs of the thinning hair of senior ladies (and gents).

Asis said Vivify has a special soap with a spongelike texture especially for the feet, gadgets that remove calluses, treatments for the hands, a noninvasive beauty regimen that removes wrinkles in two to three weeks, masks that visibly reduce eye bags, special hairsprays that give the illusion of thick hair, paraffin wax treatment for the hands, specially formulated shampoos that reduce hair fall, even fresh aloe vera treatments from plants harvested from the salon’s garden.

Vivify also sells the Japanese water brand Izumio, said to contain the highest concentration of hydrogen, such that it acts like an antioxidant, neutralizing free radicals in the body. Yuchengco said that since she started drinking Izumio, her blood tests now come out okay, near the normal range.

(When Yuchengco quit smoking two years ago—she had been smoking since she was 13, she said—her weight went up to 180 pounds. She also developed nonalcoholic steatohepatitis or NASH, liver damage caused by a buildup of fat. She has since been living a healthier lifestyle.)

“These are all noninvasive treatments that make you look younger. I cater to my age. I’m becoming bald so I buy a special shampoo to stop falling hair. I use these products. I like to be pampered so I buy things that pamper,” she said.

Yuchengco—who was raised by a single mom and who started working at a very young age—said she started pampering herself only five years ago. Her mother, Vicencia, used to say her daughter, a sun worshipper, had the “ugliest skin.”

Apart from providing exclusive treatments, Vivify also has Carmen Cruz as one of its makeup artists. Cruz is the niece of former Miss Philippines Gemma Cruz, and specializes in nude makeup. She uses her own brand, CarmenClaire, that the salon sells.

Vivify also offers a salon high tea party. A group of friends can rent a section of the salon for an afternoon of pampering. Asis will provide the high tea menu, complete with scones, pastries and sandwiches.

On regular days, the salon offers its clients tea and champoy.

“I think you have to try to maintain your youthfulness. I’ve seen 80-year-olds who look like they’re in their 60s. I like to age that way, so I keep my mind busy and I move to make my brain move,” Yuchengco said.

The best part about the salon, however, is that it honors senior citizen discounts, a rare treat, according to the seniors who frequent Vivify.

Yuchengco said that so far she is having a lot of fun running her salon.

“I’ve met many new people here who are so different from those who go to the stock exchange. These are real people. You make people beautiful and they become happy. The energy is very positive,” Yuchengco said.