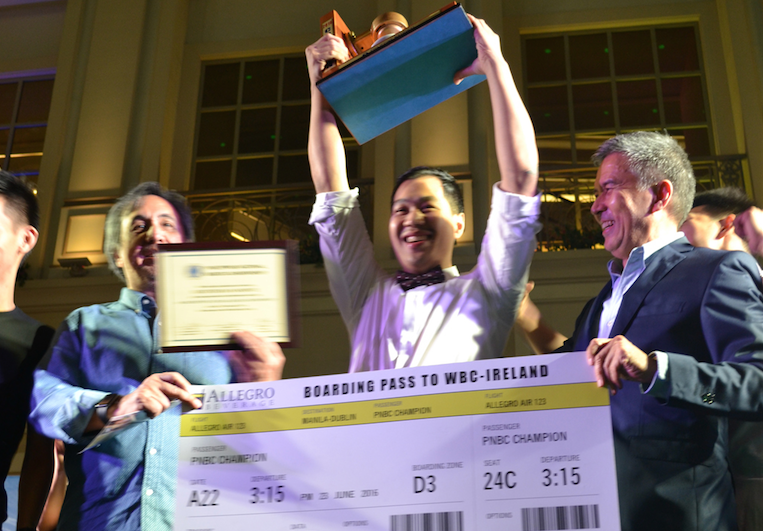 PASAY CITY, Philippines – Silvester Dan Sibal Samonte of El Union Coffee bagged the nation’s most prestigious barista title and beat five of the country’s most highly skilled baristas during an intense final round of the 2016 Philippine National Barista Championship, held on January 23 at the Newport Mall Atrium of Resorts World Manila.

All six contenders at the final round of Philippine National Barista Championship prepared and served twelve coffee drinks — four espresso, four milk beverages and four original espresso-based signature drinks of their own creation — to an exacting 15-minute time frame to a panel of judges composed of four sensory judges, two technical judges, and one head judge.

Samonte impressed the panel of Philippine National Barista Championship judges with his washed process Fat Geisha coffee throughout his barista routine. For his espresso beverage, Samonte instructed the panel of sensory judges to look for notes of passion fruit, grape apple and mango; and notes of banana caramel coupled with nut chocolate finish for his milk beverage. For his signature drink, Samonte added his espresso beverage to a natural concoction of honey tea, jasmine and orange cascara to produce a coffee drink that tasted like pink grape fruit juice. Samonte’s beverages demonstrated the versatility of his chosen single origin specialty coffee from Finca Nuguo, Colubre, Panama.

“To be a champion, a barista must demonstrate strong technical skills, craftsmanship, excellent communication as well as great customer service skills, and devotion for coffee,” said Lauro Fioretti, Head Judge to the 2016 Philippine National Barista Championship and International Representative from World Coffee Events, official organizers of the World Barista Championship.

“Silvester Dan Sibal Samonte prepared and served high quality coffee beverages during the course of his performance and has exhibited professionalism, creativity, and passion,” noted Leo de Leon, President and General Manager of Allegro Beverage Corporation, official organizers of the 2016 Philippine National Barista Championship. “Silvester is a world-class talent and is a worthy representative of the country. Rest assured that Allegro Beverage Corporation and the local barista industry will support him fully as he journeys the road to the World Barista Championship,” Mr. de Leon added.

The powerhouse of 2016 Philippine National Barista Championship finalists in the order of their official rankings are:

Silvester Samonte will officially represent the Philippines at the 2016 World Barista Championship — the preeminent international coffee competition, June 22 to 25 in Dublin, Ireland. ADVT