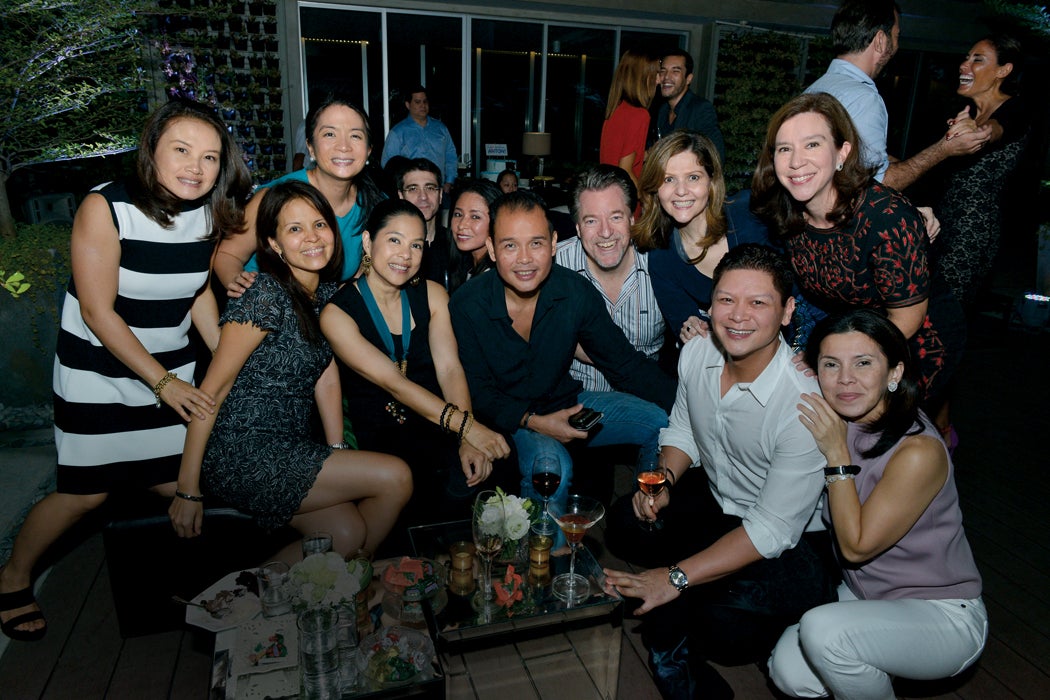 The roof-deck of the Swatch & Swatch store on Arnaiz Street (Pasay Road), Makati, was the fabulous scene of a recent birthday bash for Philippine Tatler editor in chief Anton San Diego.

The stars above were in full view, with a cool wind blowing. Sofas and lounging chairs added to the relaxing atmosphere.   On one side of the deck was a food station, manned by the staff of caterer Kai Restaurant.

In the air-conditioned room, there were two long tables for those who wanted to have their sit-down dinner indoors.

Privé Luxury Club in Bonifacio Global City sent its top DJs including Gustavo Krier to spin party music for Anton and his guests.

Upon her arrival, Swatch Philippines’ grand lady Virgie Ramos was visibly delighted at how the store’s rooftop was transformed into a swinging dance club for the night.

She was introduced to Anton’s mother, the vivacious Tessie Oca Prieto, who was apparently enjoying the evening.

Since The Halal Guys partners Muhammed Abouelenein, Ahmed Elsaka and Abdelbaset Elsayed opened their first cart in 1990, it has become one of the most popular halal street food concepts.

The Philippine franchise was made possible by Jaime Daez of Fully Booked, who’s the managing director of The Halal Guys Philippines.

The founders expressed their joy over the opening of their very first international location.

“Today, history is made and we are seeing the fruits of 25 years of hard work,” they said.

When the doors opened, fans rushed to get in line as the first 100 guests were treated to a free New York-size chicken and gyro combo platter with a drink.

More than a thousand people lined up on opening day, and believe moi, the wait was definitely worth it. The food was oh so yummy, palangga.

It was a night of art and philanthropy, dahlings, when the Asia Pacific Financial Inclusion Summit was held in Manila.

Bangko Sentral ng Pilipinas (BSP) and Citi Philippines hosted dinner for the affair at the Metropolitan Museum of Manila.

BSP Governor Amando Tetangco Jr., Citi Asia Pacific chair Shengman Zhang and Citi Philippines CEO Aftab Ahmed personally greeted the 500 invitees from all over the region and other parts of the world, united in their cause “to promote financial inclusion.”

The summit was mounted by Citi Foundation in partnership with Financial Times and the Foundation for Development Cooperation (FDC).

The guests were surrounded by the magnificent artworks of National Artist Benedicto “BenCab” Cabrera, since the museum was hosting a retrospective exhibit of the artist.

The Filipino dinner was capped by a cultural dance performance by Citi Philippines employees and a musical recital by the BSP Choir, which received a standing ovation.