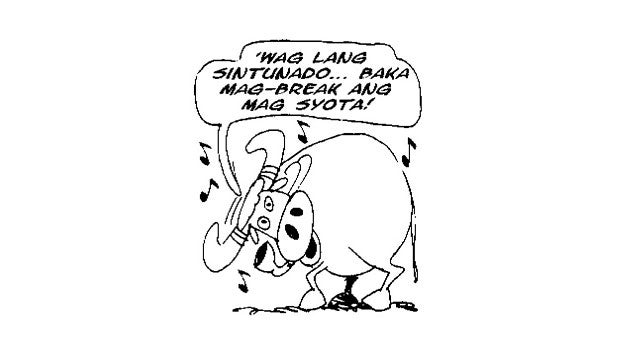 Please, Mr. Postman, sing a love song for me

It may be easier these days to send a romantic e-mail or text message, but nothing beats snail mail when it comes to wooing women.

Especially if the Valentine’s card comes with a bouquet of roses and a love song or two performed live by the postman himself.

“Filipinos love surprises. We never get tired of them,” said Mark Arthur Avila, 26, one of nine singing “kartero” (postman) from the Philippine Postal Corp.’s (PhilPost), who have been delivering flowers and gifts, as well as a serenade, as part of the agency’s Valentine promo until Sunday.

“People who get serenaded, most of them women, always get overwhelmed with emotion, with some crying (after),” Avila said.

“But others are embarrassed since we tend to draw a crowd, and ask us not to sing anymore. Of course, we convince them to let us sing, even  just a few lines,” he added.

He has even witnessed one wedding proposal, said Avila, who has been working for PhilPost for a year.

“The woman was at her office and her boyfriend waited outside Makati City. When it was time for me to sing, he came in and proposed,” Avila recalled.

But even before the singing kartero became a Valentine novelty, postmen have found themselves in the midst of love stories, though not always the happily ever after sort, said Vicente Cantillana, 59.

The PhilPost mailman cited one incident in the 1980s when he delivered a letter to a man in Malate, his designated area. Since the man wasn’t around, his wife received his mail. Big mistake!  The letter came from the husband’s lover in Australia.

“The wife confronted me and thought I had connived with her husband,” recounted Cantillana, a Philpost mailman for the past 37 years. “I told her I didn’t know about it, I just deliver letters.”

Despite that awkward moment, Cantillana believes that snail mail is here to stay even in the age of e-mail, text messages and social media.  Though not as popular as before, sending Valentine’s Day cards and love letters is a practice rooted in our culture, he said.

“We keep them as souvenirs,” the postman added.

The singing kartero gimmick was started last year as part of Philpost’s efforts to strengthen its courier services, said the agency’s chief of marketing for Mega Manila, Diosdada Marquez.

The idea became a hit, especially among young professionals, she added. Now, mailmen also sing on other occasions, including birthdays.

Valentine deliveries by the singing kartero cost P2,000 each, and come with a bouquet, a card and two songs chosen by the sender to be performed by the mailman.

This year, Marquez said the mailmen held auditions, unlike last year when they asked just any postman with the vocal chops to join the gimmick.

Serenade to husbands, too

Although it’s mostly men who send out singing Valentines, Marquez said a few women had requested them as well to serenade their husbands or boyfriends.

“One singing kartero told me that one of the men even cried. The postmen said they find it most touching when recipients cry tears of joy,” Marquez said.