Truly, madly, theatrically: 6 couples and how the stage brought them together | Lifestyle.INQ ❮ ❯ 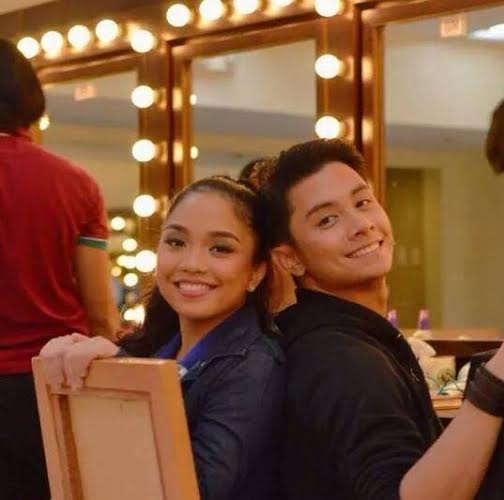 Truly, madly, theatrically: 6 couples and how the stage brought them together

Filipino plays and musicals have given us couples such as Crisostomo Ibarra and Maria Clara, Orosman and Zafira, Florante and Laura, Julia and Tenyong (“Walang Sugat”), Ada and Dodong (“Zsa Zsa Zaturnnah Ze Muzikal”), Aileen and Tolits (“Rak of Aegis”), among others.

Love happens, too, to the actors and backstage crews who bring these characters to life. Here are some of them.

Teetin Villanueva and JC Santos: ‘Something to believe in’

It was when JC Santos watched Dulaang Unibersidad ng Pilipinas’ (DUP) “Noli Me Tangere: The Opera” that he first noticed Teetin Villanueva in the ensemble. When they were both cast in DUP’s “Adarna,” JC declared she was his leading lady.

“I was one of seven Adarna women, so there’s favoritism there,” Teetin points out. “Then he volunteered to choreograph the piece I was directing for DUP’s summer workshop program. That’s when we started to get to know each other.”

“When I first met him, I thought ‘Guwapo. Mukhang Ingglisero!’ I discovered later on that he’s really very kengkoy,” recalls Teetin.

And what does JC think of her now that they’ve been together almost three years? “She’s a sweet little talented thing,” he says.

They say that if their relationship were a song from a musical, it would be “Something to Believe In” from “Newsies.”

For this year’s Valentine’s date, it’s a toss-up between “a good dinner or driving around Luzon.”

Goldie Soon and Jamie Wilson: The goofy rock and rollers

In addition to acting, Jamie Wilson also does technical direction, while Goldie Soon does stage management. When he was the road manager for rock band Lokomotiv, she caught one of their shows. They ended up talking.

“About a month later, we were dating!” he says.

“Her smile just dazzled me; my Goldie’s smile could light up the world! I knew she was a keeper. It was like lightning striking, or watching the very first sunrise after an eternity of darkness. I thought to myself: if I could make this girl smile at least once every day, then my life will mean something.

“She’s smart, fierce, has a great sense of humor and, most importantly, she’s made me want to be a better man every single day we’ve been together. And all this time, she’s always allowed me to be myself! I’m the luckiest man in the world.”

“He made me laugh,” recalls Goldie. “I felt comfortable with him right off. I felt that I could talk to him about anything. We still talk about anything and everything, and that’s a big part of the attraction.”

They’ve been together nine years now. “Nine wonderful years of adventure, great conversations, amazing discoveries and personal growth, as individuals and as a couple,” says Jamie.

Both were recently in Repertory Philippines’ “Run For Your Wife,” for which, at last year’s Aliw Awards, she was nominated for Best Actress and he won for Best Actor.

“We were slow dancing in Hobbit House, and the Binky Lampano band started playing it. That’s been our song ever since,” he says.

These two rock and rollers are also goofy enough to dress up in costume when they go watch musicals. And they admit to always getting mushy every time they hear Razorback’s “Nakaturo Sa’yo.”

Their backstage discipline and knack for planning have influenced their Valentine’s dating style. “I think it’s unfair for the men to have all the fun planning dates,” says Goldie. “Every year, we alternate who’s in charge of the anniversary and of Valentine’s. This year, I’ve got Valentine’s Day. It will be a surprise.”

Cannes-celebrated actress Angeli Bayani went to watch Red Turnip Theater’s “Rabbit Hole” where Ross Pesigan was cast. “After the show, I introduced myself and congratulated him,” she says.

Ross says it was initially Angeli’s physical appearance that caught his eye. “But it’s her confidence that’s especially attractive to me. She struck me as a woman who knows exactly who she is and what she wants out of life.”

“He’s very easy on the eye, no doubt, but I was astonished at how little he cared for our age gap of 16 years, and how emphatic he was about how much he wanted me,” says Angeli.

“I tried to break it off with him more than once but he pursued me. He stands by me, no matter what. In the end, it’s his heart that I fell in love with. How it burns, so proudly and furiously, with so much passion for life, love and his craft.”

Ross shares a story about Michelle and Barack Obama.

“Barack says if she’d married a restaurant owner, she’d be the co-owner by now, to which she replies, ‘No, he’d be the president by now.’ That’s who Angeli is to me, she’s the Michelle to my Barack. You don’t let that kind of woman go.”

Both have film projects this year—she in “Ned’s Project,” directed by Lem Lorca, and he in “Hermano Puli,” directed by Gil Portes.

They’ve been together a year. What have they discovered about each other since?

“We’re both messy,” they say, laughing.

“I definitely saw him as the class clown. Within five minutes of meeting him I was cracking up. I find that extremely attractive in a person; I was hooked right away!” says Mikkie Bradshaw of pop singer and theater actor Nyoy Volante.

Nyoy, for his part, when asked about his first impression of Mikkie, says simply: “Uh, hello? Have you seen my fiancée? Come on!”

“When I got to know her, she turned out to be a very determined and kind person,” he adds.

The couple compares their relationship to the musical where they first met, Atlantis Productions’ “Rock of Ages,” back in 2012. “It’s a roller coaster ride, but in the end love wins, and there’s a rock and roll celebration for a finale. That’s us!”

Mikkie was last seen in Ateg’s “The Bridges of Madison County” and in Rep’s “Run for Your Wife.” Nyoy was in Ateg’s “Shrek The Musical.”

In 2014, Nyoy proposed by writing and illustrating their love story in the form of a children’s book and tying a ring to the last page.

The couple say they don’t usually celebrate Valentine’s Day on the 14th, and this year would be no different.

“We call it ‘National Nyoy Volante Day’ because that is usually the busiest time of year for Nyoy. I’ll be working as well,” she says, laughing. “We usually celebrate at a later date. This year, we will be celebrating our last monthsary as an unmarried couple a few days after V-Day.”

They are set to wed later this month.

Patricia Gascon was stage-managing Black Canvas’ “Kyemestry” at last year’s Fringe Manila and standing in for an actress during technical rehearsals. Jomelle Era, a dancer with Daloy Dance Company, saw her.

“Na-in love na daw siya sa ’kin,” says Patricia. “If that actress had not been late, Jomelle might not have seen me and we might never have become a couple. Mabuhay to all stand-ins!”

Jomelle’s first impression of Patricia? “She’s hot! And she has a strong aura.” Patricia, meanwhile, says Jomelle is “a person of words and beliefs. I really admire her stand in life.”

They were together for nine months before they tied the knot just a month ago. “A modern-day shaman presided at our wedding. We actually call the ceremony as our Union of Souls. We believe we are soulmates.”

This year’s Valentine’s will be their first, and they’ll be working together instead of dating. The pair have founded an art community called #Hampasan, which will host an open art jam that evening.

Later in the month, Jomelle, who has also danced for UP Filipiniana Dance Group, will be exploring solo pieces and performance art.

“My wife will be dancing in this year’s Fringe Manila,” says Patricia. “I will be there to support her in every step of the way. I’ll be her stage manager, technical director, best friend, wife, number one fan, her critic, you name it.”

Shiela Valderrama and Lorenz Martinez: the ‘mataray’ and the aloof

Lorenz Martinez thought she was mataray. Shiela Valderrama thought he was aloof. They first met while working in Rep’s 2001 production of “The Secret Garden.”

They’ve been together since. Eight years ago, they got married, and are now proud parents to five-year-old Simone.

“I was attracted to her beauty, brains and talent,” he says.

“I love his sense of humor, talent, and, well, he’s very appealing!” she says.

The couple were recently in Peta’s “Rak of Aegis,” as Tatay Kiel and Kapitana Mary Jane, and Ateg’s “Shrek The Musical” as Lord Farquaad and Fiona.

“Most of the time we work together in the same show, so schedule-wise it’s perfect. We help each other out all the time at home, reading or throwing lines, listening to each other sing,” she says.

“Like all past Valentine’s days, we will probably be working this year, but we usually have a dinner date before or after the day itself,” they say.

If their love story were a musical or a play, what would it be? “Ours is a love story that hasn’t been written yet,” says Shiela, with a wink and a laugh.