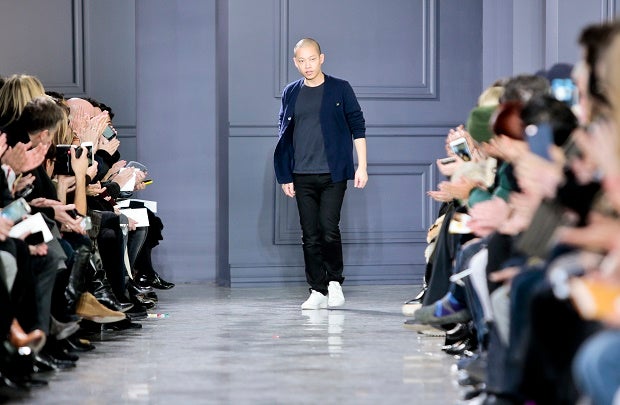 The Canadian-Taiwanese designer entitled “immaculate” the collection of his eponymous label at Fashion Week, where he is also making an appearance as artistic director of womenswear at Hugo Boss.

There was an impeccably cut navy dress with a round neck, a black dress with plunging decolletage embellished with a blue fur collar and a long-sleeve knit dress with bare shoulders and a plunging neckline.

The Wu woman of fall/winter 2016 is elegant and sexy, yet comfortable and sophisticated—as seen with a delicate black lace dress paired with a long leather coat.

“The idea is about these immaculately dressed women. I wanted to address the idea of the wardrobe and thinking about what she wants and what she covets, and that’s really important for me,” Wu told AFP.

“It’s not about a seasonal trend particularly, it’s not about day or evening, it’s just beautiful clothes that fill her wardrobe.”

With an unusual nod to, if not austerity then at least sensible purchases, the designer said the Wu woman of fall/winter 2016 did not want to splurge thousands of dollars on a one-season wonder.

“She wants things that can stand the test of time,” Wu said backstage after the show.

“I think she wants quality, and she wants to be sexy and feminine and sophisticated, but she wants that refinement.”

Wu shot to global prominence aged 26 when he dressed Obama in a stunning white creation for her husband’s first inaugural ball in January 2009—as feat he matched at the couple’s second in 2013.

The young designer repeated his oft-stated ambition of dressing Australian Oscar-winning actress Cate Blanchett, up for best actress in “Carol” at this month’s Academy Awards for a fourth nomination.

“I think she is such a chic woman and always kind of a style icon for me,” he said.

But Wu stopped short of wading into political waters when asked if he had any style tips for Hillary Clinton.

“I think it would be the other way around, she would give me advice, I think for me I’m just happy such a smart woman is running for president,” he said.

The unflappable Wu seemed relaxed after his show, despite having to prep his Hugo Boss runway presentation for next week.

Tadashi Shoji unveiled a fall/winter collection, inspired by a tattoo parlor, which was much sexier and edgier than his customary feminine lace overlay crafted into lady-like evening and cocktail gowns.

He paraded a collection of geometric patterns and flesh-toned mesh jumpsuits and dresses that mimicked body art, giving his models the impression that they were almost naked except for tattoos.

Gemstones and titanium hardware pierced the fabric and glittered on the skin. Texture and luxury were proved in the form of faux fur coats and velvet evening dresses. Hair was slicked and grungy.

“Fall 2016 is a remix of body ornamentation,” the label said in a statement introducing the snow.

“Primal beats. Gather your tribe. The night is young.”

The most stunning look were geometric patterned dresses in copper and black, with metallic cord embroidery fashioned into a sheath dress, evening gown and jumpsuit that shimmered in the bright lights.

The veteran Japanese-born American designer took a bow at the end, dressed in hot magenta trousers and a baggy black top.

Ralph Lauren rounded out the afternoon by unveiling his fall/winter collection for the Polo brand—which for women was summed up as “cool and sophisticated” and for men mimicked an elite gentleman’s club.

The highlight of fashion week on Friday night will be Barbadian superstar Rihanna, who is to unveil her collection for sports line Puma, following in the footsteps of Kanye West’s line with Adidas.