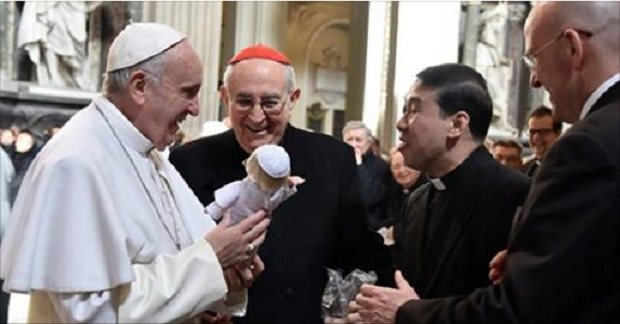 Pope Francis has received a Philippine-made miniature doll of himself from a Filipino priest in Rome, the Catholic Bishops’ Conference of the Philippines (CBCP) reported.

According to a report from CBCP News, Fr. Robert Young from the Prelature of Batanes gave the “Lolo Kiko” doll to the Holy Father on Thursday during the latter’s visit to the Archbasilica of St. John Lateran for a meeting with the Roman clergy ahead of his trip to Mexico. “Lolo Kiko” was used by Filipinos to call the pope during his visit to the country last January 2015.

“I thought I have to do something as I wouldn’t have another chance like this,” Young was quoted as saying.

Young, who was residing at the Pontificio Collegio Filippino, said he crossed security lines to get near the pontiff after his speech and shouted “Santo Padre!”

“When he reached the Pope, Young told him in Italian: ‘Here’s a gift for you, made in the Philippines by a friend of mine.’ He said the Pope smiled and said: ‘Oh, Lolo Kiko! Is it for me?’” the report said.

Young, who recalled the brief moment as feeling like “eternity,” said the doll came from his friend in Manila who made the souvenir dolls for the papal visit more than a year ago. RAM