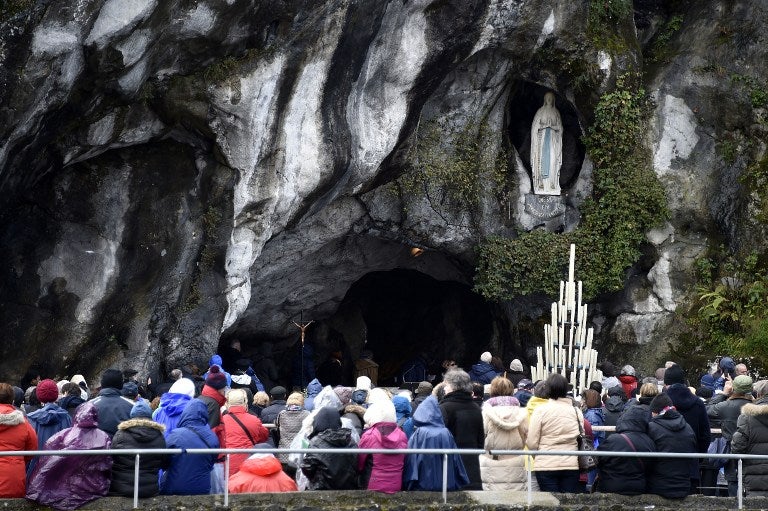 Pilgrim gather under the statue of the Virgin Mary inside the Massabielle grotto on February 11, 2016 for the 158th anniversary of the virgin Mary's apparition to Bernadette Soubirous in Lourdes, Southern France. AFP PHOTO

LOURDES, France—Shopping around for a Valentine’s Day weekend made in heaven?

Married or not, straight or gay, you and your sweetheart will be welcome in Lourdes, the town in southwestern France that has attracted “miracle” seekers for a century and a half, officials said Friday.

“Come to Lourdes to say I love you,” beckons a flyer put out by the Lourdes diocese, touting a “couples weekend” as part of efforts to boost dwindling visitor numbers.

While the flyer is illustrated with the expected hearts and cherubs, and the silhouettes of a man and woman holding hands, the sanctuary’s treasurer Thierry Castillo insisted that the invitation is “open to all kinds of couples — married, not married, homosexual…”

He noted however, that unmarried couples, straight or gay, could not expect the blessing of the Catholic Church.

“The miracle of Lourdes is that of the encounter,” said the rector, Reverend Andre Cabes, recalling the town’s founding “meeting” — the moment 158 years ago when peasant girl Bernadette Soubirous experienced an encounter with the Virgin Mary, according to Church doctrine.

READ: The Pope planned his exit and executed the plan

“We launched Operation Saint Valentine this year with this in mind,” Cabes said.

Over the decades, millions of Christians have flocked to the site where the waters are believed to possess healing powers, and the Church has recognized 69 “miracle” cures — inexplicable by scientific means — in that time.

As of late Friday, around 100 couples had made online reservations for the Valentine’s weekend, the diocese’s communications director David Torchala told Agence France-Presse, adding however that none were gay.

“We’ll see who turns up. The goal is not to know who they are, the idea is to welcome all couples so that they entrust their love to the Lord. It’s a prayer for couples” to be led by Lourdes’ bishop, Nicolas Brouwet, Torchala said.

“This initiative aims to extend God’s love to all. It’s a first,” he said, noting that it fits in with the theme of the Jubilee Year proclaimed by Pope Francis, a special year of remission of sins and universal pardon.

But the spokesman said couples cannot expect a “nuptial blessing” or “ecclesiastical act”.

At a key Vatican meeting last year, the world’s Catholic bishops framed the question of gay believers in terms of how priests can help support families who have “persons with homosexual tendencies” in their midst, while reiterating the Church’s opposition to gay marriage.

Francis had set the tone for greater compassion and pragmatism towards homosexuals in 2013, when he famously asked “Who I am to judge?” when asked about gays in the Church, pulling the rug out from under centuries of teachings that homosexual acts are sinful.

Local officials in Lourdes are concerned that the town of around 15,000 may be losing its appeal, with a recent study concluding that its some 220 souvenir shops and 159 hotels are “doing steadily worse”.

It found that arrivals decreased by about a quarter between 2009 and 2014, a drop that may be partially explained by the financial downturn, but also by the fact that visitors are preferring to come on their own rather than on organized tours — and more and more are coming out of curiosity rather than religious fervor.

In October, Lourdes will host a fair for tour operators to generate interest in higher-end stays.

But mayor Josette Bourdeu does not want to sacrifice its identity. “The sick (seeking healing) must remain the city’s DNA,” she said.