Arturo Luz has found the inheritor of his art | Inquirer Lifestyle ❮ ❯ 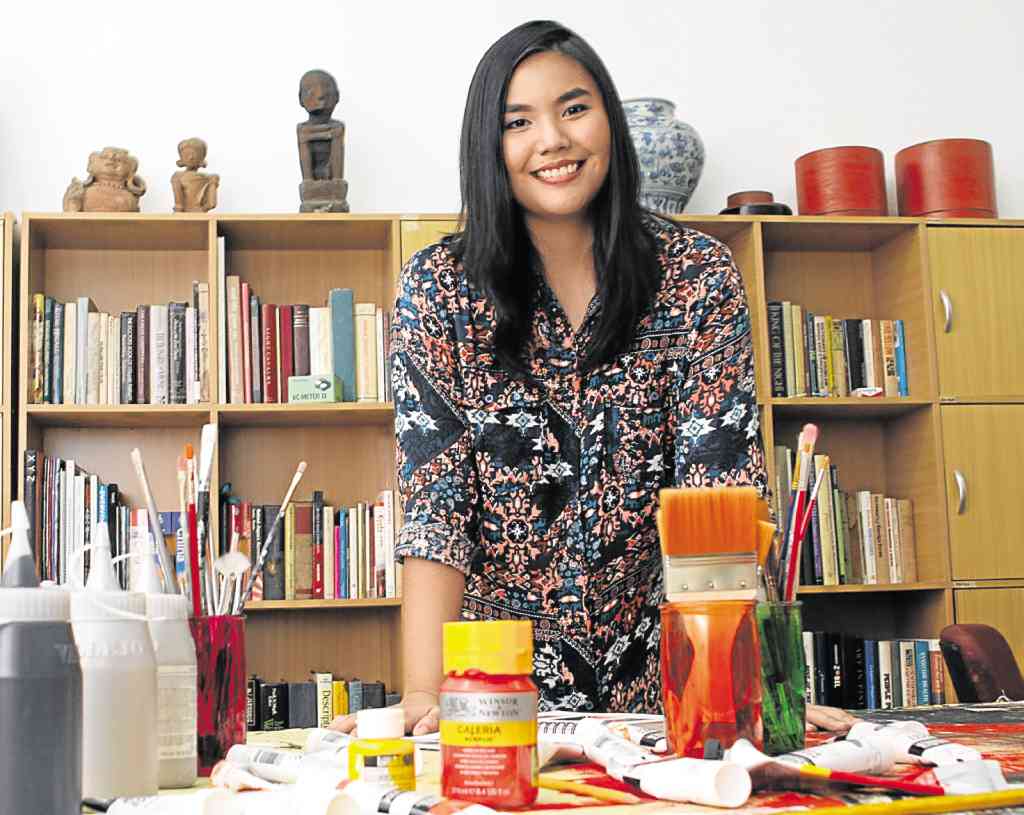 IN HER grandpa’s studio PHOTOS BY ALANAH TORRALBA

Arturo Luz has found the inheritor of his art

When National Artist Arturo Luz had to close his venerable eponymous gallery in late 2002, he said one reason was none of his four daughters was interested in the art business. None of them had taken the brush to continue his art. It sounded less of frustration and more of resignation.

Imagine his surprise then when his art was carried over by his 24-year-old granddaughter Paulina, only child of his daughter Angela and actor Vic Sotto.

“He was super happy, very surprised,” Paulina recalls the time her grandpa discovered she could paint. (She has been living with her grandparents since she was a child.) “They were both very surprised. My lola invited her friends to my exhibit.”

“I don’t use much color,” says the artist. “I really like gold and silver, then ochre, straight from the tube. The extent of my mixing is red, yellow, orange. I like warm colors. I don’t like using green and blue.”

Her art is an exemplar of Minimalism and Geometric Abstraction, verging between Arturo Luz and Piet Mondrian. She acknowledges Mondrian as her biggest influence, aside, of course, from her lolo.

“Lolo is not preachy,” she says. “He doesn’t tell you what to do or not to do. He’d just give you the tools and let you be.”

She is naturally drawn to abstraction as it is something she has been imbibing from her grandpa’s work since she was a baby.

But she’s also open to figuration. She admires Michelangelo’s works, for instance. “They’re nice. But if it’s something that really resonates to me—no.”

She shows studies that reveal her series “Figures” originating in stick figures or naïf outlines of human figures that have been distilled into abstraction (clearly from her lolo’s image-making).

Unlike some artists who can hardly draw a proper figure and thus create shortcuts by jumping to abstraction, splattering paint on the canvas and calling it art, Paulina wields an able hand in drafting.

She shows an early self-portrait with her lolo in acrylic on canvas, based on an old photograph and solarized à la Avedon.

At 15, she studied art in high school in Glendale, CA.

“They put me in art class,” she recalls. “I didn’t want to be there, because I was thinking I was not artsy at all. But I had no choice, I was a new student.

“Our art teacher was very good. He told us: ‘Anyone can draw. If you can draw a letter C, you can draw.’ He showed us a picture of a knight in shining armor on a horse, turned it upside down, and asked us to copy it line by line. When I flipped my drawing, I was super shocked, I was so surprised that it looked right.”

Her abstraction evolved from calligraphy. When she came upon the colorful work of letterer Abbey Sy, she could only exclaim, “Ang ganda! Gusto ko ’to.” So she began doodling and lettering, copying Sy’s fluid strokes embellished with flowerets.

“It became abstract because I wanted to have my own style of calligraphy, not just flowers,” she says. “I was thinking, What about lines? All my paintings are made of straight lines, super abstract.”

What about curves? “Not yet. Right now I’m not interested in curves. Lolo has a lot of compasses here that I should use daw. But I’m not forcing it. The idea will come eventually.”

Her ambition was to be a professional golfer. Her dad got her interested in the sport as a child.

From age 9 to 15, she had been playing in tournaments in Hong Kong, Singapore, Thailand, Malaysia. She played twice in the junior world tournament in San Diego, CA. She counts some 80 golf trophies to her name.

“That was my life,” she recalls. “But soon I was burned out. When I was in the US, it was so cold there I didn’t want to play. After I returned, I played for four years at Ateneo. I became team captain, but I didn’t enjoy it as much. I wasn’t interested in competing anymore.”

“That’s the way my dad shows love,” she says, beaming.

After graduation, she took voice and dance lessons, jazz, and played badminton, while biding her time before getting a proper job.

She doesn’t display the eccentricities of the archetypical artist but, rather, the peeves and faves of a regular girl.

“I love dogs,” she enthuses. “I have a shih tzu and a chow chow. They’re like my siblings.” (She’s the youngest of Sotto’s four children, after Danica, Oyo and Vico.)

When she’s not painting, she’s watching TV series. She says she’s been obsessively following 33 of them.

“Ma-party ako in college,” she says. “When I was younger, my mom was quite strict with the time I should be home. Now it’s the reverse. She’s the one who stays out late, and I have to check whether she’s home already.”

She admits she was into hard drinks then, particularly Jäger shot, but now it would make her retch. She’d settle for red wine.

“I love steak,” she says. “I also love Japanese food.”

A quiet evening is eating out with her boyfriend in Senju restaurant at Edsa Shangri-La.

“When I was younger, my goal in life was to become a housewife,” she sheepishly reveals.

And she seems to have found the right man in her boyfriend of 1½ years. She takes pride in his having a master’s in Environmental Management and Sustainability from Harvard.

“He’s super corporate, but he loves art,” she says. “Super love siya ng Lolo because he is good in conversation. Every time he visits, they would spend a long time talking.”

She has also dabbled in other art forms. Last December, her father cast her in his movie “My Bebe Love” as a barkada of the lead, appearing in three scenes with short speaking lines. Almond-eyed, tanned and svelte, she sometimes looks like a young Amy Austria.

She was a finalist in the MYX VJ search, and had taken three summers of lessons on Broadway songs. “Musical theater is my super passion. I can’t dance but I can decently sing. I can also do decent acting. But I’m not amazing in any.”

It could be as painter that she might yet amaze. She started painting regularly last Dec. 2 and has produced over 100 pieces since.

She had no intention of selling, but no sooner had she posted images of his work on Instagram that a friend called up: “Are you interested in selling? Because my mom is interested in buying.”

Since then her paintings have been selling fast, she’s also taking commissioned work. She’d ask clients what style they want, whether the composition should be vertical or horizontal, but she refuses when they ask her to use blue and green.

“The hardest thing is achieving balance —knowing when it’s too much, when it’s enough,” she says.

She’d put down what she’s working on, look at it from afar, try to figure out where it’s going. Does it have many lines? Is there too much color? Often, for her studies, she uses cut-outs of alternative lines and colors that she superimposes on what she has originally drawn, to determine the right composition or achieve harmony.

Paulina is now using her lolo’s studio and she fills it with her clutter: brushes, paint tubes, palettes, canvases. (At one point, her grandma Tessie checks in on her and greets the visitors.)

Here, he is opening the world to his granddaughter, a treasure trove of options for her art. Gathering dust on the shelves are books ranging from Giorgio Morandi to Imogen Cunningham, Isamu Noguchi, Robert Motherwell, Liu Kuo-Sung.

This one is from her grandfather: “She is original. She will be one of the new breed of artists who will deserve attention.”

That’s the best compliment any upcoming artist could have, coming as it does from someone reputed for his elite standards and mandarin taste.