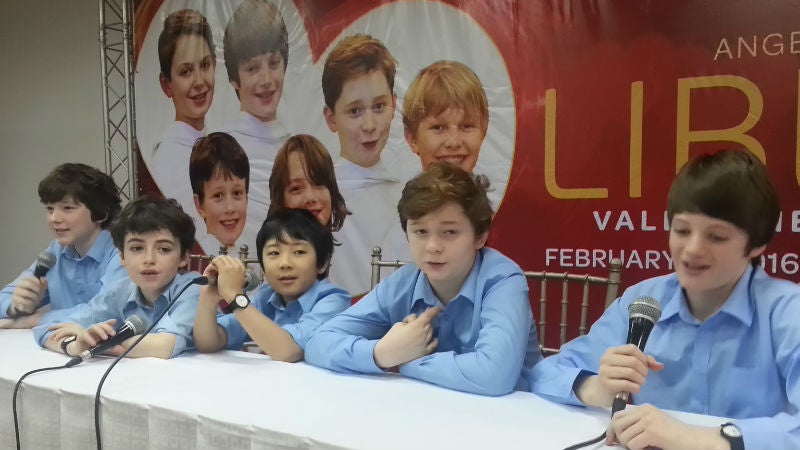 THEY’RE just kids—some in their early teens—but the members of the internationally renowned London-based boys choir Libera said that joining the group had enabled them to become better persons.

They said that being in the group had made them learn to interact with others in a friendly way like being in a sports team or a big family.

And they are no different from today’s typical kids who listen to pop and rock artists.

Five of the 30-member choir—Ciaran Bradbury-Hickey, 13; Tadhg Fitzgerald, 8; Taichi Shinokubo, 10; Isaac London, 12, and Alessandro Mackinnon-Botti, 13—sat down with the press a day before their scheduled performances tonight at the Philippine International Convention Center (PICC), and on Feb. 18 at Centerstage of SM Seaside City Cebu.

“I like Years and Years (a British electronica trio),” said Botti. “It’s got nice melodies.”

“I like Royal Blood, it’s a bit loud and crazy,” said Hickey.

When the Inquirer asked if any of them would like to pursue singing full time in the future, the boys said “it’s not always easy to make it in the music business. A lot of us haven’t really thought about what to do next, but Libera is a great thing to do while we’re still making up our minds.”

Their concert repertoire is “a mix of choral music and pop… but not Nicki Minaj,” Hickey quipped.

Libera is also the Latin singular imperative of “liberare,” meaning “to free.”

In the same year, the group performed the song on a Scottish television program, “Sunday Live,” and then released its own album also titled “Libera.”

Almost 20 albums later—many of them said to be best sellers—Libera has become a sought-after group worldwide.

It’s officially a “registered charity” in the United Kingdom in which a board of trustees, consisting mostly of parents of members, makes all the decisions on Libera’s regular tours, usually three times a year.

The PICC and SM Seaside City Cebu shows mark the fourth time Libera will be performing in the country. The PICC date—a highlight of the Philippine-UK Friendship celebrations—is a benefit presented by the British Alumni Association led by its chair Roberto de Ocampo, who told the Inquirer that the previous Libera shows had been “sold out.”

This year’s beneficiaries include Caritas Manila, Children’s Hour and Foundation for Disadvantaged Children.

The Libera members said they joined the group either due to a natural inclination to music or out of curiosity.

Botti said he knew how to play the piano when he heard about auditions for new Libera members.

Hickey said he went to the auditions with “no idea I was good at singing.”

The boys said they’re not allowed to eat chocolates before a performance because it affects the throat.

Water and ham and cheese sandwiches are OK, they added, “but after a performance, we can get crazy and eat all we want.”

Since they know what the Philippines is famous for, the boys said they “would like to go to the beach. We haven’t been to a beach in a long time. It’s way too cold in England.”