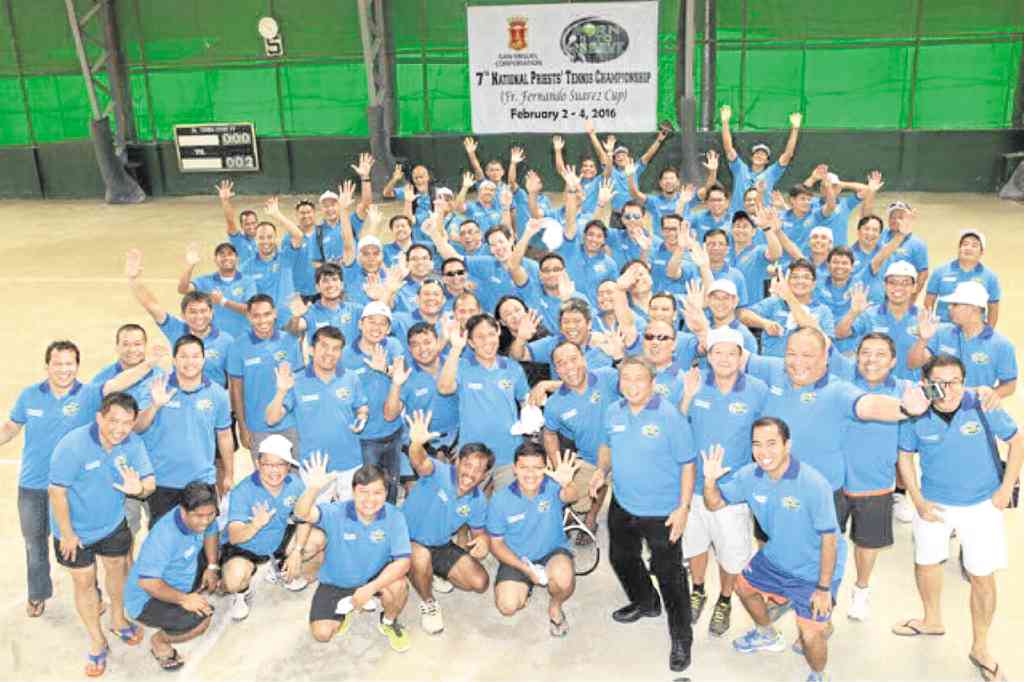 AROUND 200 priests from all over the country joined the 7th National Priests’ Tennis Championship. The winners will fly to Poland later this year to compete in an international competition for men of the cloth courtesy of San Miguel Corp.

The priests agree that tennis is a very efficient stress reliever, oftentimes the only escape that helps them stay sane.

“We priests were born to serve and, here in tennis, we have to improve our serve,” Suarez reminded the participants.

“And when we improve our service, we will win because, with service, the definition is ‘not expecting anything in return,’ and that’s an ace,” he added with a laugh.

The tournament was first held in 2010, and purely by accident.

Suarez, who played tennis even before joining the priesthood, recalled how a few other priests, who were also into the sport, attended the 2010 National Congress of the Clergy in Pasay City.

“Since we were all here in Manila, we agreed to hold a tournament during the break. That’s how it started. We were only 30 then, but we keep on growing. Now more than 200 join every year,” Suarez noted.

Tournament winners get free tickets to play with other men of the cloth in an international tennis competition in Kraków, Poland.

This year, major sponsor San Miguel Corp. donated airline tickets to Suarez and at least 17 other priests who either won or were finalists in different categories.

Suarez and Fr. Didoy Molina were the runners-up in the open doubles category won by Fathers Haber and Felix Abaño.

Organizers said there is a check for P200,000 that would be given to a “poor parish” to spend on feeding programs for parishioners. Suarez said construction firm DMCI also sponsored some prizes.

Singles winner Serrano was candid enough to admit the trip to Poland was enough to make him compete.

“I want to see Poland so I joined. But I play to keep myself fit,” he told Inquirer Lifestyle.

The spiritual head of The Lord’s Ascension Parish in San Fernando, Pampanga, used to play basketball and tennis when he was younger.

However, a game-sustained injury in 1998 forced him to stop. He resumed both and even took up badminton in 2005, but a nagging back injury eventually made him choose tennis exclusively.

Serrano said that aside from the benefits of exercise, tennis also allows him to be more sociable and to expand his sports circle beyond the church.

Bacallan, singles champ in the senior category, and runner-up Villanueva also extolled the physical benefits of tennis in separate interviews.

The 68-year-old Bacallan was the oldest participant. Now retired, he already takes maintenance prescriptions for blood pressure and circulation and also for kidney and prostate ailments.

“The doctor said I already have the beginnings of osteoarthritis and said I would be paralyzed soon, but I developed a stretching technique to address it. Tennis helps in building tolerance for pain. And when I am on the court, alis lahat ng stress ko,” Bacallan said.

Villanueva heads the Mary Cause of Our Joy Parish in Muntinlupa City and claims that tennis “is the one that keeps me sane.”

The priest said he has a brother who is an avid golfer, who once tried to lure him to the fairway.

“But golf takes up practically a whole day, so it’s a long time out of the parish. In tennis, you can go three hours, even two hours lang, and your parish schedule doesn’t get ruined,” he pointed out.

Villanueva said he would prescribe a game of tennis to other priests. “It’s always good to sweat every day. It keeps our sugar and uric acid levels in check.”

The priest was among those who won in tournaments in Manila and was sent to Poland.

Fr. Venancio Viray of San Rafael Parish in Mabalacat, Pampanga, did not need any prodding.

“I have seen many priests with blood-pressure problems. About half of us are diabetic. And in most cases, the diabetes is acquired, which means it’s the lifestyle of eating without exercise. If I didn’t play tennis, I doubt whether I would have good blood pressure and sugar levels,” Viray said.

Not only does tennis provide him health and relaxation. “When priests who play get to know each other, there’s friendship. Magkita, magkuwento, magkakakilala. Next thing you know, secondary na lang ang game. But tennis takes our minds off issues. No talk about the ministry,” he stressed.

Fr. Larry Abayon takes the sport further by being one of the 10 to 12 priests of the so-called Monday Club that takes over the indoor shell courts at South Point Village in Cabuyao City, Laguna, at the start of the working week.

Catholic priests usually take a break on Monday, following the rigors of successive Sunday Masses. Members of the four-year-old Monday Club play between 8 a.m. and 12 p.m.

“This is the stress-buster that keeps me going in my priesthood,” said Abayon, who already won a trip to Poland in the 2013 tournament at the Manila Polo Club. He was one of the champions in the singles division.

“It was my first time in Europe. We first stayed in Vienna and traveled to Poland with other priests. I reached the quarterfinals,” he said.

Abayon added that he enjoys playing doubles now, unlike when he was younger.

Bishop Wilfredo Manlapaz of the Diocese of Tagum in Mindanao was at the scene but kept to the sidelines while 10 priests from his   diocese competed.

“We have 30 priests (in the diocese) who are tennis players and we have our own tennis court. Ours is lighted so we can play at night,” he said.

Like the other players, Manlapaz extolled the benefits of tennis.

“Friendships are maintained, and I am happy to see them play. Because of tennis, I can still play at 75 years old. I hope my priests would also continue playing tennis, so they can stay healthy, serve longer and serve more people,” he said.