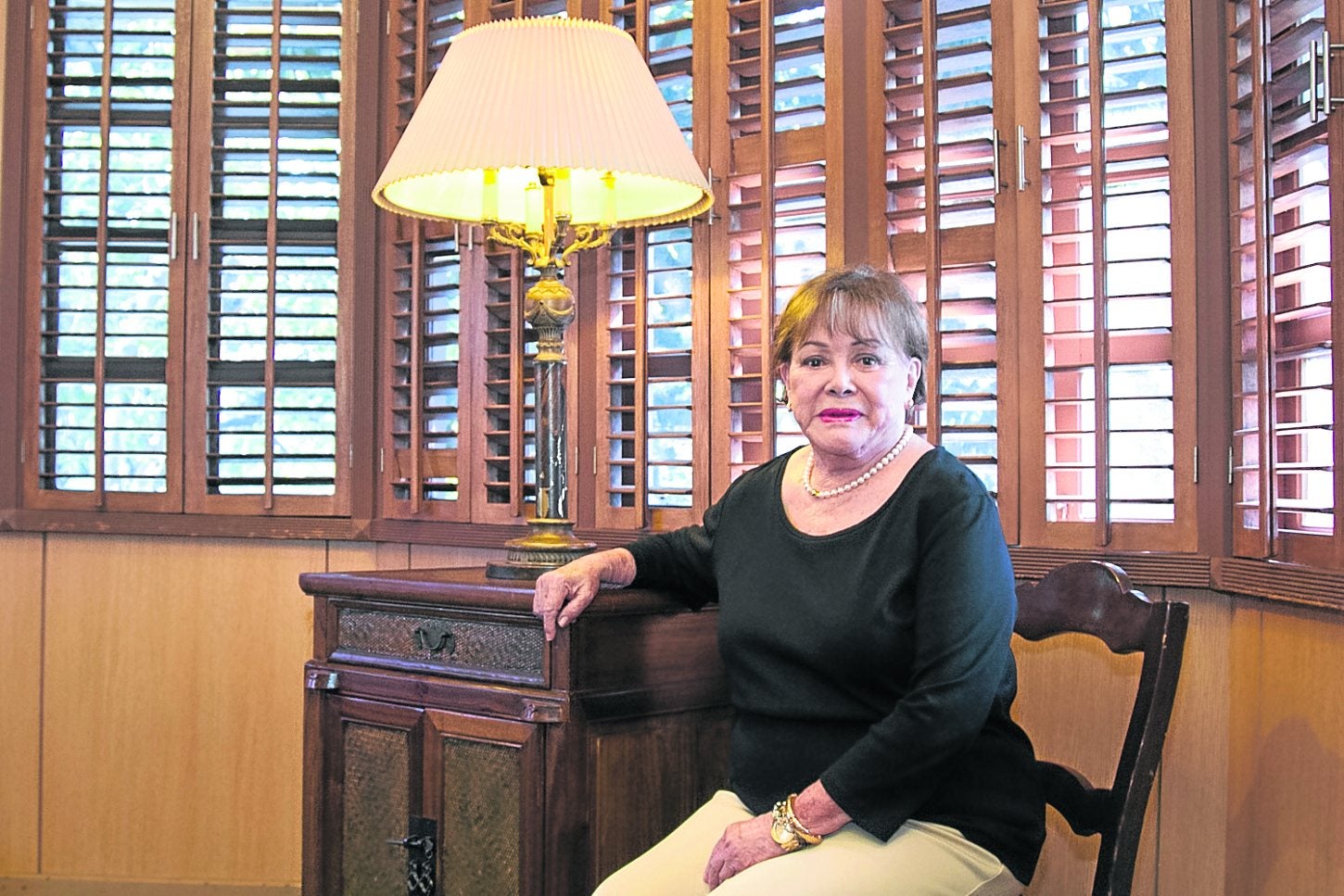 BENITEZ: “I think the secret to happiness and long life is you should always be busy. I am always busy, thinking and creating something new.” Photos by Alec Corpuz

At 82, woman behind Mario’s still cooks the meanest ‘adobo’

“It’s a special dish because it’s my mom’s recipe,” says Benitez, who tweaks the original recipe by using balsamic vinegar instead of regular vinegar. She also uses olive oil.

“Because of my age, I’m combining healthy ingredients,” she points out. But, of course, she admits she can’t take the bacon out of her adobo. The bacon adds a smoky relish and provides saltiness.

Benitez’s adobo has no soy sauce.

The balsamic vinegar is a balance to the complex, sour-salty taste, the taste of garlic and bacon apparent without being overpowering.

“I reduce the olive oil and balsamic vinegar to get that full adobo flavor,” says Benitez, the matriarch behind the famous Mario’s Restaurant.

She first learned to cook dry adobo at a young age from her mom, Milagros Villareal.
When she got married at 18, she switched to cooking adobo with lots of sauce (adobado) taught her by mom-in-law,
Lola Enday, who hailed from Pagsanjan.

Husband Mario grew up on all-Filipino food, while she was exposed to cooking and eating all-Spanish dishes, such as
fabada, paella Valenciana, lengua, callos.

“When I got married, my mom-in-law mentored me in the kitchen because she wanted to make sure that her son would eat well,” recalls Benitez.

“Since I was so young and uto-uto I said yes to everything. Well, they all worked to my advantage later on.”

She learned to cook Filipino food including batchoy, kare-kare, lumpia, adobo with liver sauce, and lots of dishes that use coconut milk and pineapple.

Every day Benitez would go with her mom-in-law to Quinta Market to get the freshest veggies and meat.
When they got home, she would stand beside her in the kitchen to watch her cook.

Sometimes, Lola Enday would ask Benitez to write down the recipes.

“I loved her,” Benitez says. “She wasn’t grouchy at all. She was a nice woman. Remember, back then we were all old-
fashioned. Women had to grow up to be a housewife. Can you believe that? But then I used my housewifely knowledge in the kitchen to build a restaurant.”

It was Benitez’s hubby who opened Mario’s in 1971 in Baguio City. Benitez was then happily running her own dress shop in the family house’s basement when her husband broached the idea of putting up a restaurant.

“Mario’s was my husband’s project,” she recounts. “He was very sociable and loved to entertain friends and clients at home.”

Her husband was marketing director of San Miguel Corporation.

The restaurant was an instant hit and Benitez had to give up the dress shop to focus on the thriving food business, which initially served Filipino and Spanish dishes. Later on, Mario’s focused on all-Spanish food.

“I love to experiment,” says Benitez, who has four children, Fil, Marlo, Anton and Mitos. “I like to put things together to create a palatable, wonderful dish. I remember I made marinated chunks of beef and topped it in a bowl of rice. Later, I got surprised that every restaurant had salpicado. That’s my original Baguio recipe.”

Mario’s Baguio and a branch on Tomas Morato, QC, have expanded their menu to include international dishes like pastas and steaks while retaining its Spanish bestsellers such as callos, paella, lengua and sopa de ajo.

At present, Benitez is still hands-on in the business, creating new dishes for Mario’s. She plans to write her recipe book for the younger generation.

“I have a huge box of recipes,” she notes. “I think I should really write a book.”

She still cooks at home, going to market every day and preparing the ingredients.

“Because of my age, I’m becoming more health-conscious. I love vegetables. Instead of kangkong, I put camote tops to my sinigang,” adds Benitez, whose cooking apparently keeps her going.

“I think the secret to happiness and long life is you should always be busy,” she points out. “I am always busy, thinking and creating something new.”

Marinate chicken with garlic, pepper and ½ c of balsamic vinaigrette for an hour or more. Set aside.

Trim some fat off the smoked bacon. Fry bacon in olive oil till golden brown. Set aside.

On the same pan, fry chicken until golden brown. Add the chicken marinade and fried bacon. Pour the other ½ c of balsamic vinaigrette on the pan. Add laurel. Add water and let it simmer until done. Deglaze pan with a little water and drizzle the drippings into adobo.