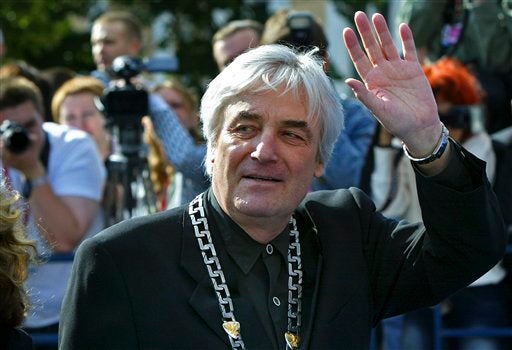 This is a Sunday, July 2, 2006 file photo of Polish movie director Andrzej Zulawski, who is chairing the competition jury for the 28th Moscow international film festival, waves as he arrives for the festival's closing ceremony, Moscow. Polish film authorities said Wednesday Feb. 17, 2016 that filmmaker and writer Andrzej Zulawski, former partner of actress Sophie Marceau, has died after a long illness. He was 75. (AP Photo/Misha Japaridze, File)

The Polish Institute of Film Art said on its website that Zulawski died Wednesday.

A day earlier his son, Xawery Zulawski, also a filmmaker, wrote on Facebook that his father was in the hospital “in the terminal phase of cancer” that left no space for hope.

Pursuing his own, expressive style, Zulawski made movies in Poland and in France, where he was awarded the top distinction, the Legion of Honor, in 2002.

Last year he was named best director at a festival in Locarno, Switzerland, for his latest film, Cosmos, based on Polish literature.

Marceau appeared in his movies made in France and in Poland. TVJ