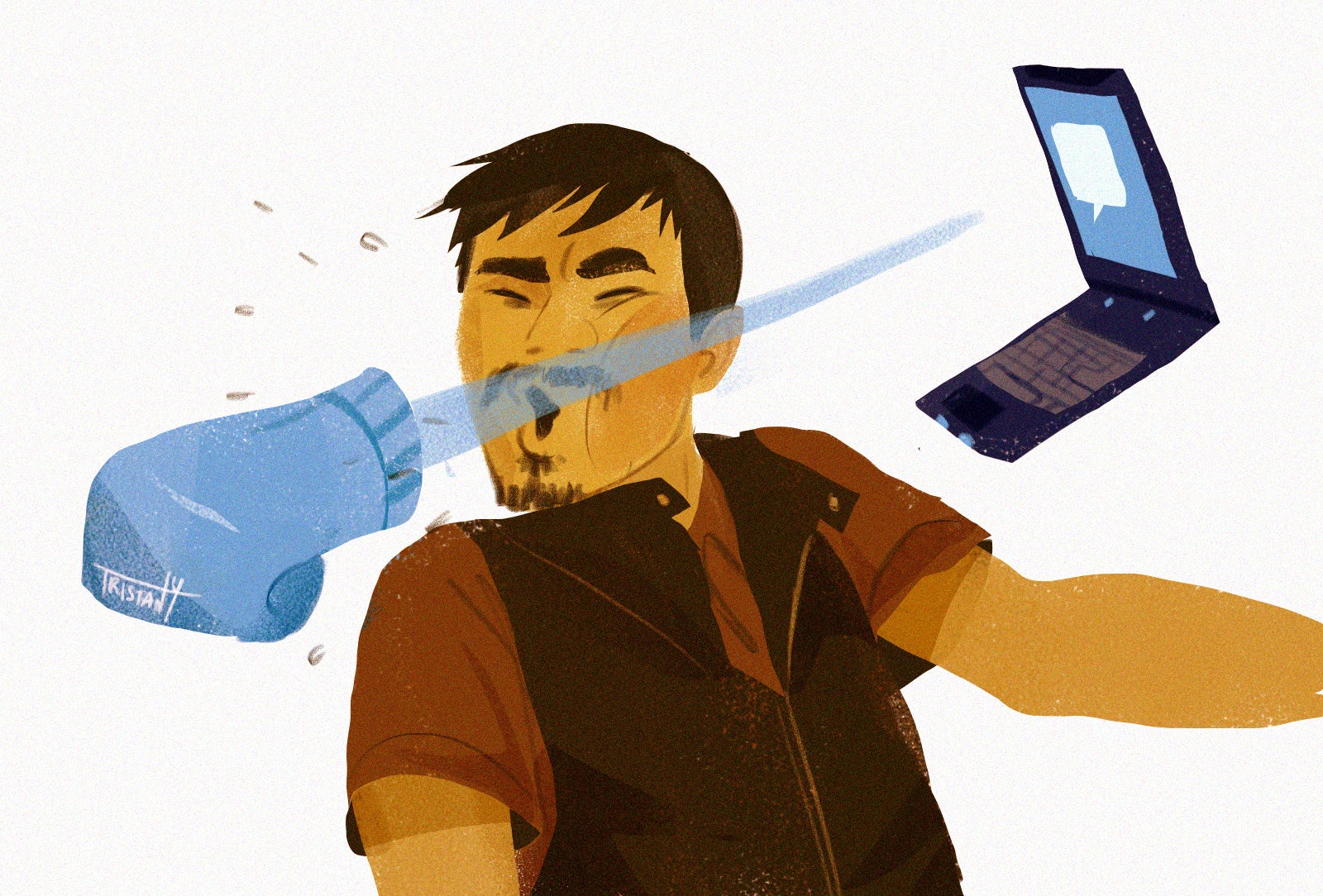 The fallout is still unraveling, after Manny Pacquiao voiced his opinion on gay marriage and homosexuality in a TV interview: “It’s common sense. Do you see animals mating with the same sex? Animals are better because they can distinguish male from female. If men mate with men and women mate with women, they are worse than animals.”

The boxing legend and senatorial candidate’s comments caused a firestorm, especially on social media, where the likes of Vice Ganda, Boy Abunda and even Lea Salonga expressed their displeasure.

It didn’t take long before Manny’s Twitter followers to drop from 2 million to 9,000. Nike has also dropped him as endorser.

Although he has apologized on Twitter, it would take awhile for the lesbian, gay, bisexual and transgender (LGBT) community to forgive him.

“Since Manny is running again for public office, he shouldn’t be close-minded. It’s funny how he compares gays and lesbians to animals, when he has made a career out of beating people up.” —Kat Lopez, 17, Ateneo de Manila University

“If Manny Pacquiao cannot respect people, regardless of gender or sexual orientation, how will he tackle issues in the Senate?” —Jan Wynton Sy, 18, British School Manila

“The saying ‘think before you speak’ applies to this. Manny should’ve been considerate of the feelings of other people especially the LGBT community. It’s not wrong to express himself but he should have been careful…” —Rinnah Marie Obciana, 17, De La Salle University Manila

“I was really surprised to hear those ‘words’ from Manny Pacquiao. Each person has freedom of expression. However, I think his statement was just too much.” —Hordy C. Mojica, 16, De La Salle University Manila

“It’s time society recognizes the dignity and humanity of homosexuals… How we treat people says a lot about us.” —Cathy Cano, 17, University of the Philippines Manila

“I’ve always seen ‘our’ Manny as a modern hero, but the decisions he has made lately have truly disheartened me.” —Pio Angelo Beltran Alfonso, 18, De La Salle University Manila

“A guy that I look up to, who says hurtful words to the LGBT community, has slipped from being a hero to zero.” —Ino Garcia, 18, College of Saint Benilde

“Manny Pacquiao’s sentiment on same-sex marriage is inhumane, considering that many of the country’s population belong to the LGBT community.” —Girlyn Gyn Torres, 17, University of Pangasinan- Phinma

“LGBT relationships are not natural as Pacquiao implied, and that’s a fact. But in this age, that has become a norm, and if Pacquiao, who is running for public office, denounces LGBT relationships by stating a fact, it is now the people who will judge whether or not they will be offended by a fact.” —Teanu Jose Tamayo, 17, Saint Louis University

“He should have done his research before speaking on such a sensitive topic. It’s pretty much fair that now he’s getting repercussions for what he said.” —Alyssa Mauricio, 17, UP Diliman

“I could have respected his viewpoint on same-sex marriage, but he chose to use such hurtful words to express his opinion. That’s what made it unacceptable.” —Jeffrey Beldia, 22, UP Diliman

“For him to say such a thing about homosexuals is more than just being ignorant. It shows homophobia. No one chooses to be gay, but homophobes choose not to understand that. Manny has used religion, a convenient reason, to justify his beliefs. But the truth is, homophobic people will use anything to justify how they feel.” —John Anthony Kings, 39, OFW

“To say that homosexuals are worse than animals is, in boxing terms, a low blow. Literally or not, it makes his argument nothing but a form of bigotry.” —Rommel Real, 27, instructor, UP Mindanao

“His words showed the public how he really perceives the LGBT community, and it’s just so alarming that he has the power to influence Filipinos who idolize him, without them realizing the true issues and struggles of the people whom Manny addressed as worse than animals.” —Christine Paula Aguila Saret, 20, UP Diliman

“The government is not for people with conservative minds, people who resist change that can make Philippine society better. What Pacquiao doesn’t realize is that a human being has a unique heart which gives him/her a distinct ability to love beyond boundaries.” —Anjo Valdecañas, 18, UP Diliman

“The issue reveals how people invalidate basic human rights in favor of their own personal beliefs. It just goes to show the reality behind our country’s supposed ‘acceptance’ of the LGBT community. At this point, it wouldn’t even be appropriate to claim that our society is LGBT-tolerant.” —Patricia Cruz, 19, UP Diliman

“What an unexpected advantage his opponents in the political arena now have. He just lost votes from the LGBT community.” —Angela Cristina Go Yambao, 17, University of Santo Tomas

“I feel like that question was a trap—raising a social issue as heavy as that is bound to bring some backlash regardless of which side you take.” —Franco Luna, 18, Ateneo de Manila University

“I am filled with disgust towards celebrities like him who have so much power to influence the masses, yet choose to waste an opportunity to spread love and equality. He is one of the many government officials who make me sick as he thinks he even deserves to run for the Senate after being so irrelevant to his constituents as congressman. We need senators who are people-centric, and so we definitely do not need him as senator.” —Julian “Tolits” Tanaka, 22, USC councilor, current Basic Student Services Committee head and former Gender Committee head

“I don’t think his condemnation of nonheteronormative relationships is qualified. First, obsession with rules and dogmas lead Christians to condemnation, which ironically Christ himself condemned. Jesus’ message is of mercy, compassion, and love, not of throwing stones to others because of their sinfulness. Second, a stance against same-sex marriage based on naturalistic arguments is misleading, for if one were to invoke a natural law, contrary to popular belief, one should actually find no heteronormativity in nature at all!” —Jairus Espiritu, Philosophy professor, UP Diliman

“I don’t understand why he said sorry. After all the fuss, after all that’s been said, he decides to apologize?! It feels forced. It was obvious that he was forced to apologize. He said what he said, saw the reaction online, and took back what he said, all of a sudden. What he said was indeed hurtful but he didn’t have to apologize as he really meant what he said. What’s done is done.” —Nikolas Fernandez, 19, San Beda Alabang

“I respect that he stays true to his religious beliefs; we are all entitled to our own opinion about every issue, but degrading the LGBT community was absolutely uncalled for. In today’s society, we need leaders who are more open-minded and understanding about certain controversial issues. Yes, it is stated in the Bible that same-sex marriage is forbidden, and in Leviticus 20:30 it says that the punishment for being gay is “to be put to death, their blood upon them.” But are we going to kill people for being who they really are? Who are we, as people who sin, to tell them how to live their life? I hope Manny Pacquiao knows how powerful his voice is. He surely lost a lot of fans and voters.” —Jude Sumcad, 18, San Beda Alabang

“He just gave his opinion about same-sex marriage. He was referring to the Bible that God created man and woman. He was correct about that, but he shouldn’t say it in public. They weren’t doing any bad to him and it will be an insult to them. Good thing he said sorry. He should never do that again.” —Heaven Dwayne Francisco, 15, San Beda Alabang

Being a conservative nation, proclaiming oneself as a proud member of the LGBT is a rarity. With half-baked comments like Manny’s, the gap between religion and same-sex marriage widens.

Even now, the LGBT community suffers from discrimination, hatred and disrespect. While we have been taught by our parents and teachers to love one another, some people, who unknowingly drown in their pride, forget this universal rule.

One lesson we can all learn from this issue is to choose the words that shape our beliefs, because they can spell defeat. And while Manny has endured a lot of blows in the ring, he still has to face jabs, uppercuts and parries from people who surround him in the real world. And this is just the beginning.