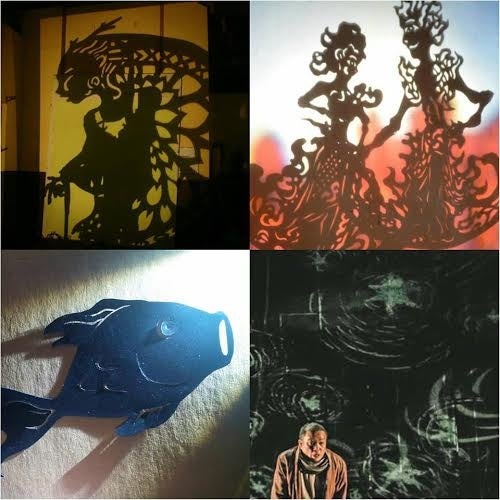 How Sigmund Pecho conjures the magic of shadowplay

“Tisoy Brown” is an adaptation of Henrik Ibsen’s “Peer Gynt.” Jose Estrella directs the translation and adaptation by Rody Vera, where the trolls and other creatures Gynt encounters are replaced with entities from Philippine mythology and folklore.

Pecho’s designs help create the supernatural and fantastic world that Tisoy Brown lives in. He’s done work with Estrella before, in her direction of “Umaaraw,  Umuulan, Kinakasal ang Tikbalang” (based on Gilda Cordero-Fernando’s children’s short story “The Magic Circle,” serialized in Inquirer’s Learning Section in 2009).

“That’s actually the show that introduced me to the magical world of shadow puppetry,” says Pecho, who is majoring in Theater at UP. The school offers certificate, undergraduate and graduate programs in Theater.

He was the show’s stage manager but also had to be a puppeteer. “The late, great Don Salubayba facilitated a workshop for us on shadow puppetry,” he says. Pecho’s been hooked since.

He apprenticed for Salubayba and worked on more shows like DUP’s “Adarna.” Salubayba had been active in shadow puppetry but passed away in 2014.

“His works inspired me to further my learning and to advocate for the magic of shadowplay in the performing arts,” says Pecho.

The materials and methods Pecho use to make puppets range from the simple to the high-tech—from cutting his designs on brown craft folder and acetate sheets, all the way to using graphic-design programs like Adobe Photoshop to edit images and even videos.

The limitations of light-blocking materials and light-producing equipment interest Pecho. “It’s how we work with what we have that challenges creativity,” he says.

“We can definitely use anything to make puppets, any material that can block, refract or reflect light. You explore the characteristics of any material possible.”

For light sources, he usually works with overhead projectors and LCD projectors. “Sometimes, you play more with light instead of shadows.”

When he’s tasked with a new production, he will illustrate storyboards first as a guide in envisioning “the whole experience of the performance, the visual language needed.”

For inspiration, he likes to watch “a lot of Studio Ghibli films, critically acclaimed animated videos and the works of artists.”

His most recent credit is designing shadow projections for DUP’s “Bilanggo ng Pag-ibig” and shows staged by TM(for puppetry festivals in the Asean region).

From book to puppetry

For “The Bread of Salt,” Pecho has been working with director Amihan “Ami” Bonifacio-Ramolete, who is TM’s company manager and lead puppeteer.

“The Bread of Salt” is an adaptation of the short story by National Artist for Literature NVM Gonzales. The show is part of the university’s arts month activities this year dubbed “Panahon ng Luwalhati.”

“It’s challenging to take on a classic short story like this. We have been immersing ourselves with the climate of the 1930s Manila, where the story is set. We are also open to a mixed media-puppetry performance,” Pecho says.