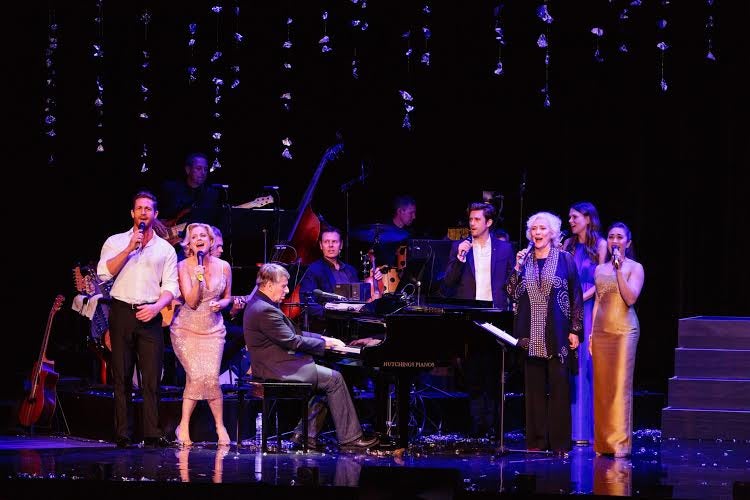 Joanna Ampil (right) with David Harris, Helen Dallimore, Aaron Tveit, Betty Buckley and Sutton Foster, in a concert celebrating the music of Stephen Schwartz, the composer behind “Wicked” and “Godspell,” and Disney hits such as “The Hunchback of Notre Dame” and “Pocahontas”. PHOTOS BY ENDA MARKEY

It’s hard to believe it was just nearly a year ago when I met her during an acting course. My acting partner was so unassuming and down-to-earth that, for a long while, I didn’t realize she was the Joanna Ampil, a Filipina with a 20-year international musical theater legacy on the West End, Europe and beyond.

Theater fans are well aware of the brilliance of Stephen Schwartz, the composer behind such classic shows as “Godspell” and “Wicked,” as well as his collaborations with Alan Menken on such Disney movies as “Pocahontas,” “The Hunchback of Notre Dame” and “Enchanted.”

But how to weave them all into a two-and-a-half-hour show?

The concert itself was faultless, taking us on a journey through songs that, although written by one man, all sounded so different, unique and captivating in their perfection.

Instantly recognizable hits like “Just Around The Riverbend” (from “Pocahontas,” sung by Foster), didn’t at all seem out of place next to the bittersweet jazz-infused “Cold Enough To Snow” (from the movie “Life With Mikey,” sung by Tveit) and the giggle-fest that was “That’s How You Know” (from “Enchanted,” sung as sweetly as any Disney Princess would have by Joanna, joined by a charming—and shirtless!—Harris).

Joanna’s big show-stopper was toward the end of the first act, part of a medley of the first versions of Elphaba’s first solo song in “Wicked,” interwoven with video of Schwartz explaining the development of the song through countless readings and workshops.

“The Wizard & I” was delivered flawlessly by Joanna, and the only thing more beautiful than the rousing response from the audience was the look of pure happiness and humility on her face as she took it all in.

Other special moments were a stripped-back, acoustic version of “When You Believe” (from “The Prince of Egypt”) by Foster, a cheeky duo from Tveit and Harris of “All For The Best” (from “Godspell”) complete with choreography, and some ad-libbed banter followed by a swift change of pace from Tveit with the poignant “Out There” (from “The Hunchback of Notre Dame”).

Each performer was so different stylistically, and their distinct personalities were really able to shine. We got a glimpse of these people as artists, not just as characters they were scripted to play.

Broadway legend Betty Buckley had the house in tears with her rendition of “Meadowlark” (from “The Baker’s Wife”), which was written specifically for her by Schwartz—though, heartbreakingly, she didn’t get the role in the original Broadway production.

Performing with tears rolling down her cheeks, she received the first of many standing ovations of the night. And we all knew we had witnessed something magical.

The crowd loved Foster’s version of “Defying Gravity”— different from the usual voice of Elphaba we’re used to hearing, and such a treat for fans to hear her take on such an iconic song.

All performers gathered onstage for another, very apt, “Wicked” gem—“For Good.” And in the final surprise of the night, Schwartz himself joined the cast onstage for one of his first Broadway hits, “Day By Day” (from “Godspell”). Cue thunderous applause and more standing ovations.

It was an extraspecial touch that Joanna was dolled up in gorgeous gowns by Filipino designer JC Buendia. She won over Schwartz and Sydney with poise, passion and that delicious voice.

No need for Joanna Ampil to defy gravity—she already does.

Marissa Saroca was a finalist in “The Voice of the Philippines, Season 1.”