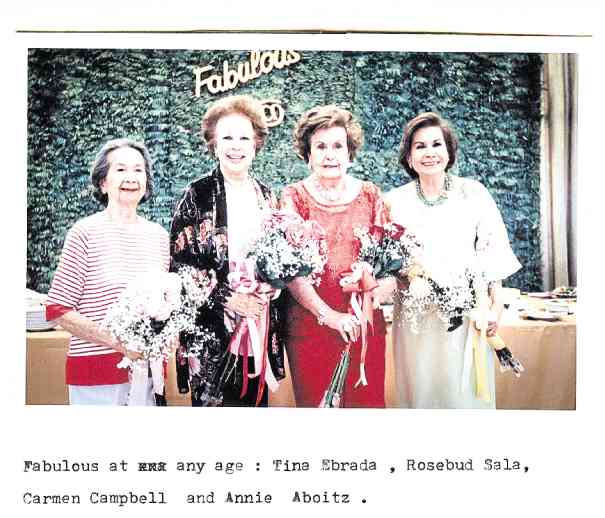 A real surprise for Michel Lhuillier

Michael and Joanna Lhuillier spent the holidays in Cebu with their three sons, Michael James, Matthew and Miles. They extended their stay for a very good reason: the birthday of Michael’s father, Michel Lhuillier, honorary consul of France in the Visayas.

Michel had no inkling of the surprise party they were preparing for him on that day. He thought he was going to have a quiet dinner with them. He dines late, and so by the time he got there the place was filled up with 75 guests for as many number of years as he was chalking up—friends and relations, mostly.

Like Michael’s two sisters, Angie Mathieu with her son Mickey Paulson and Marguerite Lhuillier with her son Chris Darza, and daughter Claudine with Mikel Ugarte. Most everyone came on time, for as Anne Marie and Johnny Dizon (first to arrive) said, the traffic was smooth that evening.

“Surprise, surprise, Happy Birthday” the crowd roared when Michel and Amparito came in. “Oh!” they exclaimed upon seeing mermaids cavorting in the pool. Meanwhile, the food stations of Café Laguna were all set to serve a gourmet experience of the highest magnitude.

Best of all was the grilled lamb chops, approved by Margie Taylor, from whose Bibendum wine shop many of the fine wines that flowed that evening came.

There was dance music, like the whole album of the Bee Gees’ “Saturday Night Fever.” Most graceful tripping the light fantastic were Michel and Amparito themselves. And the fun went on all night.

Meanwhile, Michael and Joanna have since returned to California where they and their sons are based. They’ll be back for Easter.

“Fabulous at 80!” was written in flowers over a hedge of greenery at the Cebu Country Club the day Annie Aboitiz, Carmen Campbell, Tina Ebrada and Rosebud Sala had a joint birthday luncheon. One hundred ladies of quality attended.

There they were, agile, spry and sharp as ever, acknowledging well-wishers. No gifts, they had said, and so they were overwhelmed with flowers, and delicious desserts.

Happiest among them was Carmen Campbell, whose son Sean came all the way from New Jersey with wife Pia and their 10-month-old son Andrew. “Look, he’s already trying to walk,” enthused Carmen.

Speaking of birthdays, on Feb. 24 Nelly Chiu will be 60. Her husband, Antonio Chiu, honorary consul of Slovakia, has planned a grand celebration with their good-looking children, Janice, Jillian and Jason.

There will be a thanksgiving Mass at Salon de Granada at 5:30 p.m., followed by a reception and dinner at Casino Español de Cebu. In lieu of gifts, Nelly would like donations to the Zonta Club of Cebu I, of which she is the president.

Expected to grace the occasion is Nelly’s mother, civic leader Martina “Beling” Go Ching Hai, whose birthday in June will be another grand family celebration.

To welcome the Year of the Red Fire Monkey in the Chinese lunar calendar, Marco Polo Plaza Hotel in Cebu had a grand observance the evening of Sunday, Feb. 7, at the spacious lobby.

There were firecrackers lit in the driveway, while inside, the lions’ eyes were dotted, dragon dancers snaked their way, and a lion’s dance hopped to the beat of drums. Highlight was the tossing of the Yee Sang Salad by the hotel’s general manager Julie Najar.

Next day at 10:30 a.m., the Year of the Red Fire Monkey was welcomed with the usual fanfare at Shangri-La’s Mactan Resort and Spa, amid a large crowd of hotel guests, two of which were pretty girls in bikinis.

Lapu-Lapu City Mayor Paz Radaza graced the event and took part in the ceremonies along with the resort’s general manager Rene Egle and his lovely Chinese wife, Nelly.

Communications manager Cassandra Cuevas and her assistant Monica Tan led the wat to Tea of Spring restaurant, where an excellent luncheon was served. The place is considered one of the best places to feast on Chinese cuisine.

Oj Hofer was congratulated for the lions and dragon dances presented. Beside him at the lobby was Marguerite Lhuillier, who will be featured as a bride to conclude a fashion parade at the opening of the Bridal Show of the Cebu City Marriott Hotel on Feb. 26. Arcy Gayatin is doing Margie’s wedding ensemble.