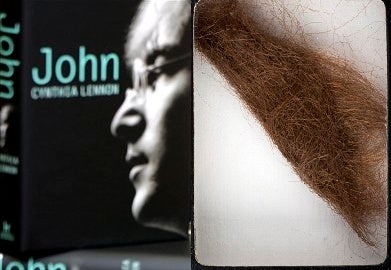 File- In this Sept 26, 2005 file photo, Cynthia Lennon, the first wife of Beatle's band member John Lennon, sits behind copies of her newly released book entitled 'John' during a book signing at Foyle's bookshop in central London. Cynthia Lennon passed away on Wednesday, April 1, 2015 at her home in Mallorca, Spain, following a short but brave battle with cancer. (AP Photo/ Jane Mingay, File)

DALLAS, United States — A lock of John Lennon’s hair that was snipped as he prepared for a film role has sold for $35,000.

A German hairdresser kept a tuft of Lennon’s hair after giving him a trim before the Beatle started filming “How I Won the War,” a dark comedy released in 1967. The movie follows the World War II misadventures of British troops led by an inept commander.

The hair was one of several Beatles-related items on auction. A photograph of the iconic band signed by all four members went for $42,500. And a sealed copy of the band’s “butcher” cover for the “Yesterday and Today” album went for $125,000.