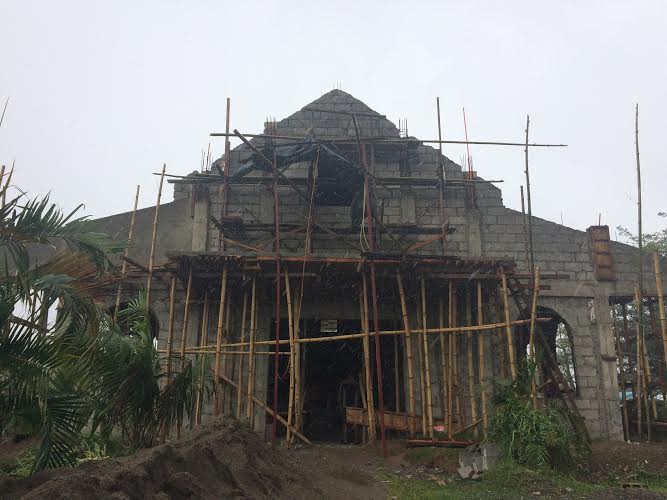 EVEN without proper permits, the parish priest of President Roxas town in Capiz province has continued to build a chapel inside the ruins of an 18th-century church in Barangay Aranguel, a former town founded by the Augustinians in 1704.

The chapel construction started in 2014 and is the project of the parish priest, Monsignor Alden Boliver. It has been ordered stopped by the National Museum and the Archdiocese of Capiz.

Human bones were recovered after the foundation was dug in 2014, prompting local officials to call the National Museum for an archaeological investigation in the area.

National Museum assistant director and osteologist Angel Bautista and his team recovered trade ware and ceramic shards dating back to the Sung and Ming dynasties.

“These archaeological materials are significant because these will provide insights into the earlier period of human occupation in the area. Furthermore, the walls of the old church are still intact and should be protected for posterity,” said a National Museum report published on its website in 2014.

The archdiocese heeded Barns’ advice and ordered the construction stopped through Fr. Rey Bernard Martinez, who was assigned by the archdiocese as the “curator” of the ruins when it was discovered the area was an archaeological site.

Fr. Martinez “personally met with the Barangay Pastoral Council (BPC) leaders together with me as representative of the LGU to explain the existing laws prohibiting them from the construction of such buildings and at the same time the value of the ruins itself,” said municipal and culture officer Arnold Alarcon Jr.

“As the curator, he verbally instructed the BPC to immediately cease and desist any construction activities inside the ruins in such time until appropriate study and alternatives are found,” he added.

President Roxas Vice Mayor Alfonso Golero told the Inquirer that the 300-year-old structure was declared a Heritage Site through a local resolution on June 20, and that the chapel construction project does not have a building permit.

Golero said that from the start, the local government had coordinated with national cultural agencies on what to do with the ruins and that it had not taken action because it was waiting for the recommendation of the National Commission for Culture and the Arts.

Bautista said National Museum would warn Beliver that he risked facing a suit for violation of Republic Act 10066 or the National Cultural Heritage Act of 2009.

The book “Monografias de los Pueblos de Panay,” published by University of San Agustin in Iloilo in 2006, says Aranguel, which was then called Aranquel, was founded as a town by the Augustinians in 1704 but did not prosper well due to pirate raids.

It lasted until 1750, when it was annexed to the neighboring town of Pan-ay, also in Capiz.

Today, it is one of the 22 barangay villages comprising President Roxas town, established in 1949.