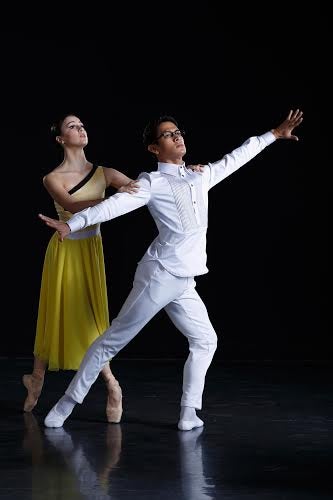 KATHERINE Barkman as Cory and Rudy de Dios as Ninoy

BALLET Manila closes its 20th season with the world premiere of Martin Lawrance’s “Rebel,” which Lisa Macuja-Elizalde calls her “dream project” and her “comeback.”

“Rebel” is a dream project that I’ve nurtured over the last five years and it means a lot to me to have it as my comeback,” says Macuja-Elizalde, who spent most of last year offstage while recovering from hip surgery.

“I’ve always wanted a full-length ballet based on Spartacus but with modern-day characters and events derived from our own Edsa Revolution. Fortunately I found the perfect ally in British choreographer Martin Lawrance who took the mission to heart. Having said that, it’s really a blessing that we are able to stage ‘Rebel’ just in time for the 30th anniversary of People Power.”

Opening on Feb. 25 at Aliw Theater, “Rebel” retains the original story line that revolves around political conflict and the intertwined lives of two couples from rival factions but adapts these to depict personalities and scenes from the 1986 Edsa Revolution.

The powerful score of Aram Khachaturian will combine with familiar Filipino anthems that have continued to evoke the spirit of People Power through the years.

Lawrance, who has extensively worked with the London-based Richard Alston Dance Company, says “Rebel” will not be a mere dance reenactment of the Edsa experience.

“In a way, being a foreigner and looking at history from an outsider’s point of view works to my advantage because I’m not tempted to recreate everything in detail,” he explains. “The narrative itself is very old and universal. It’s a hero’s journey, a classic tale of sacrificing one’s life for a noble cause. That human drama really interests me, and to depict this within the backdrop of People Power makes it all the more challenging because there are so many subplots. It’s not as simple as good versus evil; it’s about people stepping up to the call of the times and coming together to change a nation’s destiny.”

Macuja-Elizalde will be dancing the pivotal role of Inang Bayan, who rouses and inspires her suffering children to courageously unite behind a common cause.

Also featured as guest performers are internationally acclaimed musical-theater artist Joanna Ampil (as the voice of Inang Bayan) and the ABS-CBN Philharmonic Orchestra under the baton of Gerard Salonga.

Costume design is by Jeffrey Rogador.

Presented in cooperation with the Manila Broadcasting Company, Star City and others, Ballet Manila’s “Rebel” goes onstage on Feb. 26-27, 8 p.m.; and on Feb. 28, 3 p.m., at Aliw Theater, Pasay City. Tickets are available through TicketWorld outlets or online at www.ticketworld.com.ph, or call 8919999.